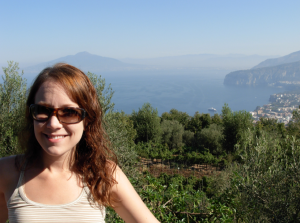 The Amalfi Coast is often described as breathtaking. Now, having been there, I could argue that it’s not the scenery that takes your breath away, but the insane way that Italians drive while ignoring any form of lane boundaries and taking cliff-side curves at high speeds. It’s enough to turn your hair white.

I arrived in Naples by plane and Sorrento by bus … and I have to say … next time, I’ll go by boat. I’ll skip the chaos of Alitalia and the “oh-my-gawd-this-bus-is-going-to-tip-off-this-cliff” moments. In Italy, there really are no road rules. The bigger your vehicle, the more people will get out of your way. Unless you’re in the smallest of vehicles, in which case you’d be a cuckoo kamikaze ridin a Vespa at top speed weaving in and out of traffic defying the laws of physic the whole time. At least the other tourists would get out of your way as they gasped, “are you insane?” Personally, I’d feel safer arriving to the Amalfi Coast by boat. But then again, I wouldn’t have such fun stories to tell. After all, it’s not an adventure unless your risking your life, right? So it’s no wonder they serve limoncello in Sorrento … at the end of the ride there you need a little something hard and sweet to calm your nerves. And I’m not talking about Italian men. Well, maybe. Okay, just a little.

Soooo, back to transportation and Italian men. 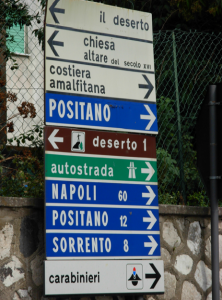 Stepping out of the airport in Naples and walking to find the bus that would take our group to Sorrento, there was a man whose frame I swear was chiseled right out of a Roman God statue mold. Tall and tan, jet black hair slicked back in true Soprano’s style with a little curly cue brushing his forehead. He had on a tight pair of designer jeans, white “wife beater” tank top, a gold chain with (you guessed it) a gigantic hunk-of-a gold cross, Italian leather shoes (of course) and big girlie-like Prada sunglasses. This man was our bus driver. Oh lord, help me. The stereotype in flesh and blood. I giggled and then hoped that no one noticed.

The ride to Sorrento from Naples is about an hour and well worth the car sickness. I think this little seaside town gets overshadowed by some of the more popular destinations like Naples, Pompeii and Positano. Sorrento is small and can easily be walked through in a day. It’s full of shops peddling handmade linens and Italian leather goods with little family owned restaurants piping the scents of fresh lemon, basil and seafood to lure you in for a leisurely Italian lunch.

Just a short uphill drive (literally … and somewhat like an extended version San Fran’s Lombard Street) you’ll find my other two favorite Italian towns, Santa Agata and Massa Lubrense. This is where my second adventure began. First, my goal was to survive hurling while being driven around the Amalfi Coast … and I don’t get car sick. The second test of my sense of adventure was the entrance to our bed & breakfast. I have it pictured here, because I know you’d think I was exaggerating. It was a dirt pathway leading to an unfinished building under construction. Seriously. Are you looking at the picture? The cab had already driven off in a cloud of dust and I’m surrounded by olive groves so there is no where else to go but down this road. 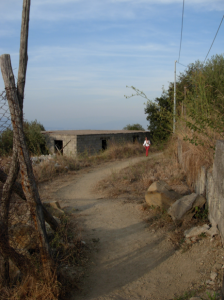 ‘Grand Entrance’ to the Inn

When you’ve traveled all day, when you’ve had nothing to eat but airport food, when you’re feeling grimy and craving a clean shower, when you can still taste the vomit in the back of your throat from fear that your life was going to end in a tour bus rolling down a cliff side into the Mediterranean … this is not the entrance you envision schlepping your luggage through.

I gulped. Then I tilted my head to the side and said, “for real?!” Then I chuckled. Then I laughed so hard I wheezed, couldn’t breathe, and my gasps for air turned into snorting through my nose … I do this when things go wrong when traveling. I’m fun that way. I put on my best zen-like yoda face and pulled my luggage through the dirt. Wheels on the bottom of the bag didn’t matter since they weren’t built for bumpy back roadin. I deliriously smiled from ear-to-ear thinking, “this is either going to be really interesting or I’m going to have to pick some olives from these trees for dinner.” Thankfully, the house at the end of this dusty road was spectacular! Italian tile tubs, big kitchen, and a balcony with a view of the coast. Aaaaah. I like happy surprises. Pass the limoncello now please.

Other delightful surprises I found in Santa Agata? Well, for starters, they produce one of the most divine white wines that have ever touched my lips, Mustilli, made with the Falanghina varietal grape. And I was even more amused that they use a glass cork. Nifty.

Just down the road a bit from Santa Agata is Massa Lubrense. This town has a special place in my heart for the 8 course family 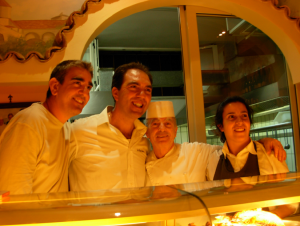 made Italian meal we enjoyed for about $30 Euros per person. Two of the most memorable meals in my life took place at Lo Stuzzichino and Fattoria Terra Nova. I had the pleasure of celebrating a friend’s birthday on this occasion and this particular year ended in a zero so it was a special one. Lucky for us, he speaks Italian and is major foodie, so we went on quite the gastronomic ride. He recreates these same mouth-gasmic dishes at his B&B in the States, The Adora Inn.

I may be of French descent, but I have to give the Italians credit for really knowing how to make dinner a slow food event. First they start with a antipasto, then pasta, then fish, then beef, then more antipasto, then a cheese plate, then desert, THEN salad, and then … the limoncello. Limoncello is actually just one of a variety of after dinner liquors they serve. Among the choices, I remember one called “rocket” that was a lettuce liquor. Radicchio. It was delish. But I’ll stick to making limoncello at home since I’m not too confident in what would happen if I stuck a bunch of lettuce in a liter of vodka.

So, next time you’re driving home from a long day and you’ve done the equivalent of schlepping heavy baggage down bumpy dirt roads … and then traffic is bumper-to-bumper… and the guy in the lane to the left of you is picking his nose … and you glance up in the rear view mirror and notice the lady behind you putting on mascara while driving … and some annoying song that you’ve heard 100 times is playing on every radio station available … just think, “I could be in Italy right now and the traffic would be 10 times worse. Though, there would be the decedents of Roman gods driving vespas shirtless weaving in and out of traffic passing you by as they said, ‘ciaoooo bellaaaa.'” And after that thought you get even more ticked. You let out a sigh. Then, go home and make some limoncello.