Puebla is widely considered the gastronomic capital of Mexico. Named a World Heritage Site by UNESCO in 1987, the city has a rich blend of history, architecture, cuisine and art. The complex dish, mole poblano, is the most famous from the area, but it’s far from being the only delectable local dish visitors should sample. The cemitas, chalupas, chilaqueles and cremitas are all worthy fare, and will leave you craving more. However, Puebla also produces some fabulous soups. Here are a few I sampled during a recent visit, and a recipe for one of my favorites, sopa de ajo (garlic soup) with quail egg and baguette toast. Enjoy! 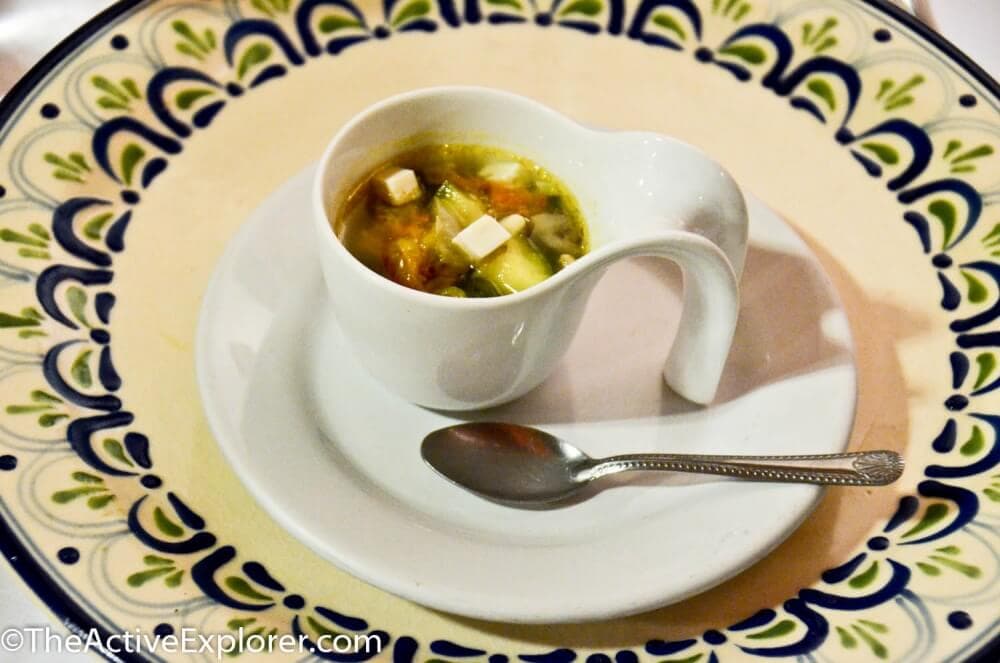 Sopa de Elote (corn soup) – The version of this soup served at Casareynaincludes a brothy base filled with kernels of young corn, vegetables and a dollop of mayonnaise (surprise!), served with lime. Together, the combination had our whole group cleaning their bowls.

Sopa de Ajo (garlic soup) – This light broth based soup packs lots of flavor thanks to arbol chilies, garlic and tomato. In this part of Mexico, it’s often served with a poached egg and toasted baguette round. The version served at La Noria used quail eggs, which were just the right size for a perfect bite. As soon as I got home, I went on a quest to recreate this fabulous soup. The recipe below was inspired by Karen Hursh Graber’s post on Mexconnect. With a few tweaks, I created a version reminiscent of the original soup I tried at La Noria.

I made my version using vegetable broth and the flavor was excellent, however I’m almost certain La Noria used chicken broth.

Find arbol chilies at a Spanish market. I looked unsuccessfully at my local grocery store. If you can’t find them, use whole dried cayenne.

Look for quail egg at an Asian market.