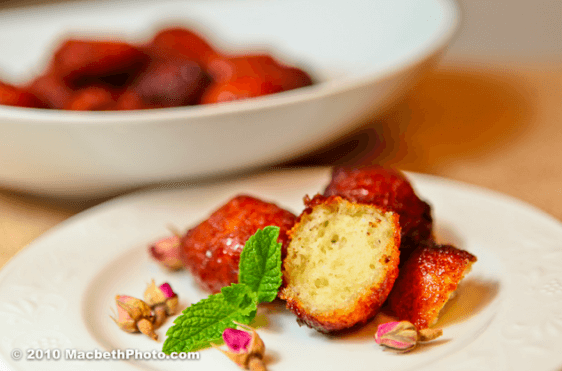 If heaven on earth existed … in my mouth … it would be this. The land of milk and honey. Sinfully sweet and smelling of roses. I encountered this delightful desert during a dinner at a trendy Indian restaurant, Nirvana Beverly Hills, with other bloggers … so they didn’t mind at all when I whipped out my phone at the dinner table to tweet that I was having some sort of delicious Oh-My-Gawd experience. It was like falling in love for the first time and I wanted to proclaim it to the World. You must be thinking that I’m over-reacting to a simple meal. I admit, it could have been the sensual atmosphere of Nirvana which is candle-lit and oozing not-so-subtle hints of Kama Sutra with their artwork and menu descriptions. Appetizers are called “Foreplay.” Entrees … “Loss of Innocence.” And dessert … “Sensuous Pleasures, Sin committed, but quickly forgotten.” Whoa. I have to remember, this is Beverly Hills.

But I do believe that even if I wasn’t under the glittery influence of LA, upon savoring this treat I still would have closed my eyes, left the earth and had a moment. The taste of sweet roses … not the scent of a flower, but it’s flavor. By the time I regained my senses the menus had already been lifted from the table and I didn’t know my new lover’s name. I tweeted that I was having a sweet honey and rose flavored dessert. Someone immediately responded, “you must be having Gulab Jamun.”

I tried saying that out loud, but it sounded like I was trying to speak with a mouthful. (Try it. Right now. Go ahead. Say … Guuuulaaaab Jaaamuuun. See?) So I just made a mental note of the roses and honey. Later when I went to post about it again, in my insecurity of the language, I described them as honey rose donut holes. Big mistake. HUGE! My Middle Eastern friends quivered at the comparison. “Gulab Jamun are not donut holes!” they proclaimed. But … uhm … they certainly look like donut holes? Fancy rose scented ones at that! Wikipedia describes them as waffle balls. I once called them O.M.G. balls. That didn’t quite sound right either. So let’s just learn how to pronounce it correctly. According to MacMillan Dictionary, it’s /ɡʊˌlɑːb ˈjɑːmən/.

And here’s how to make them …

Start with some honey, powdered milk, and roses. 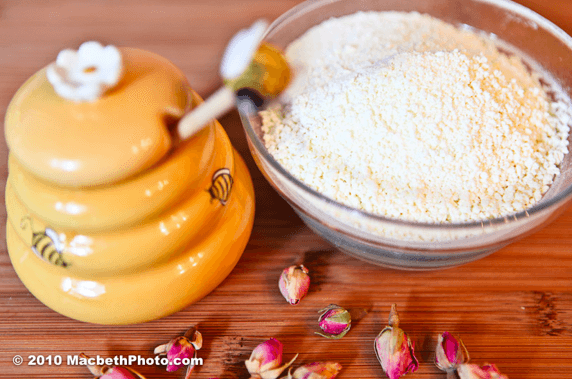 I actually used the roses to make tea.  Nirvana did give me a recipe for making rose water at home (posted below).  But I found it at my local grocer in the spice section as a natural gourmet flavoring … or perfume? 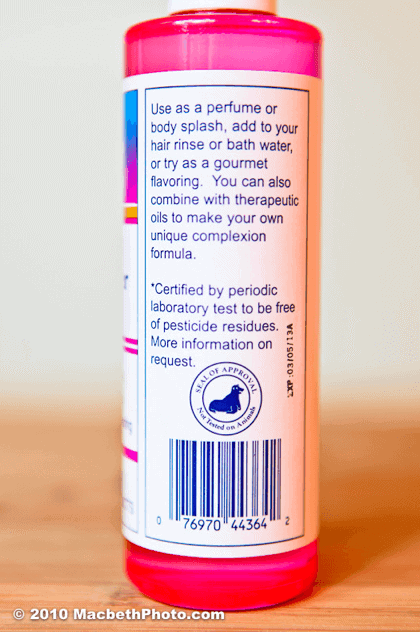 The dry milk I was a little iffy about.  One of my chef friends suggested using  all whole ingredients (i.e. nothing powdered or dried).  So I looked up other recipes online for gulab jamun and all used powdered milk.  So I decided to stick to the recipe.  Doesn’t look appetizing … but works like a charm! 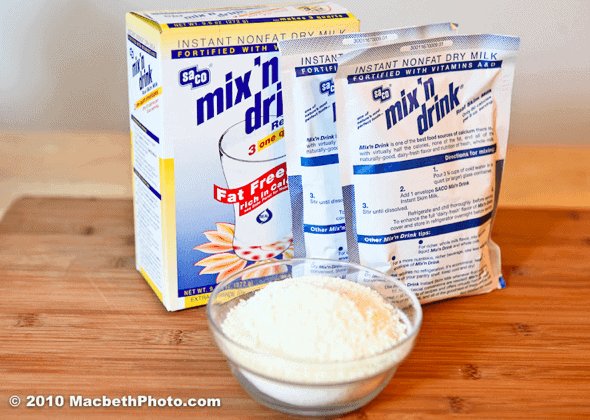 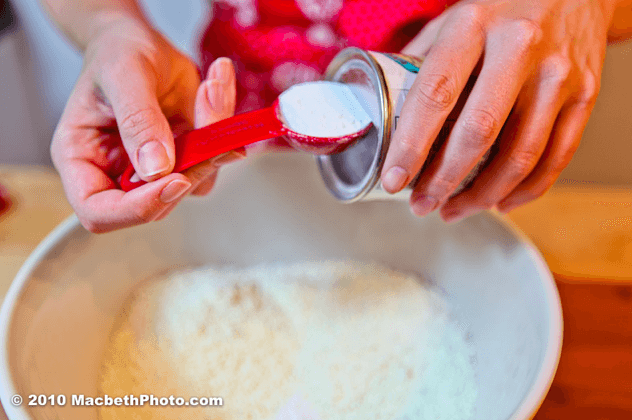 As if the powdered milk wasn’t enough … add to that 2 1/2 cups of heavy cream.

Yeah … these donuts …I mean …. gulab jamun, are rich and creamy little cakes. 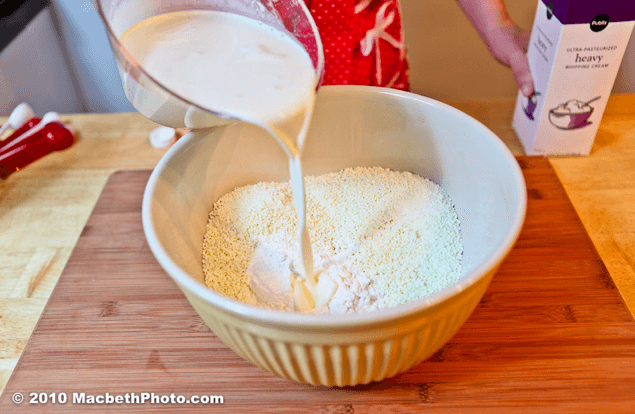 Mix together with a wooden spoon.  (It gets a little sticky.) 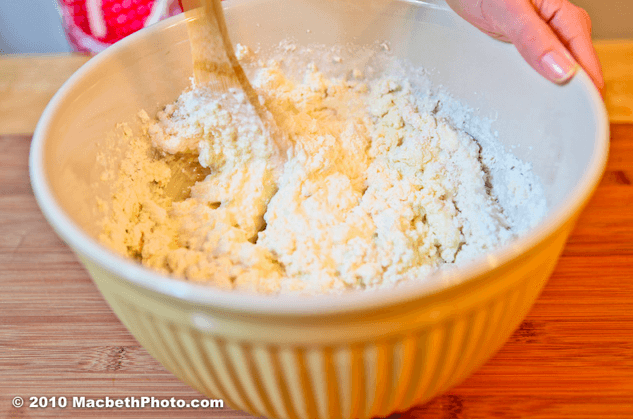 Cover your hands with flour and roll into 1 inch balls. 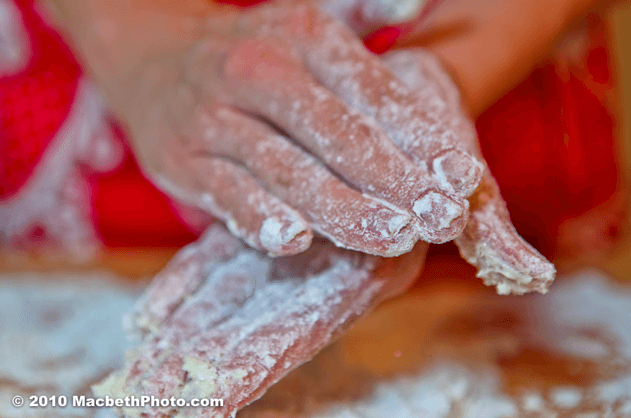 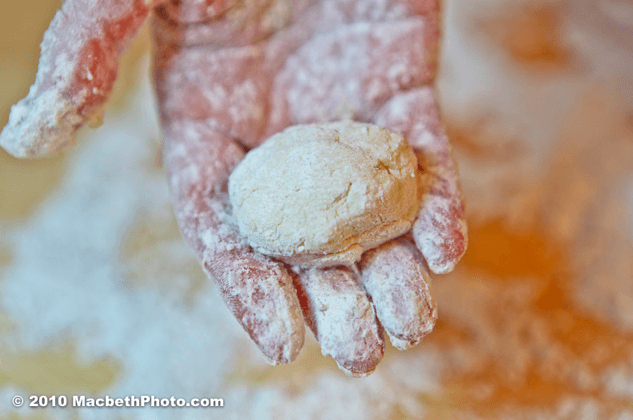 Confession: here’s where I went wrong the first time around.

I’m a runner, so I don’t cook/eat/prepare fried foods.  Ever.  I don’t have a deep fryer.  I’m also the kind of cook that sometimes just throws from the hip and says, “let’s try it!” without properly researching.

Google is at my fingertips.  I should have looked up “heating” and “boiling points” of oil.

But instead I followed the advice of Julia Child, “The only real stumbling block is fear of failure. In cooking you’ve got to have a ‘What the hell?’ attitude.”

So, “what the heck!”  Let’s pour some oil in a pan and turn the temperature up to high!

(By the way, I don’t recommend this!) 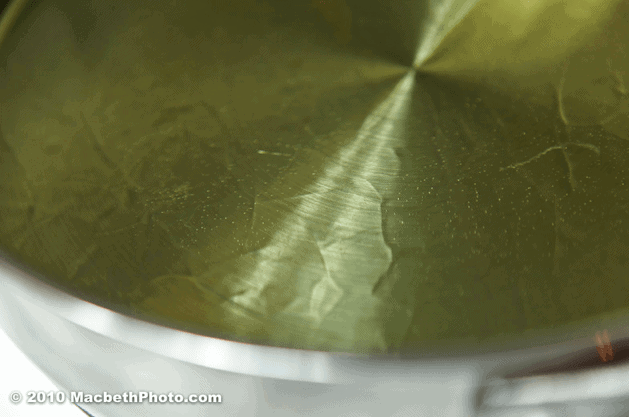 And the first one goes in … 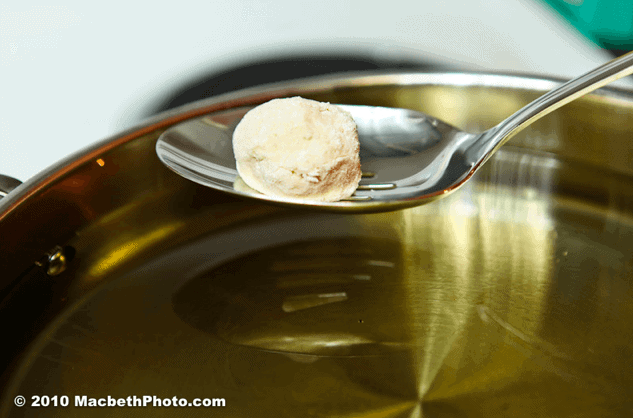 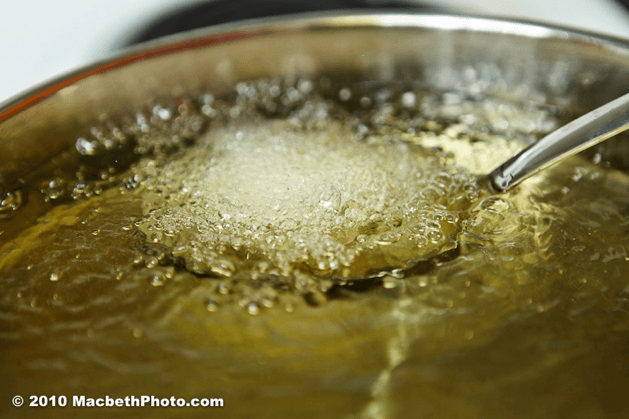 This happened in all of 3 seconds.  Seriously.  The recipe calls for them to reach a “rich mahogany color.”  But somehow I don’t think this fits that description.  Especially since it happened so fast that I doubt the inside cooked.  So … we turned the heat to medium and waited a bit.  Learn from my mistake. 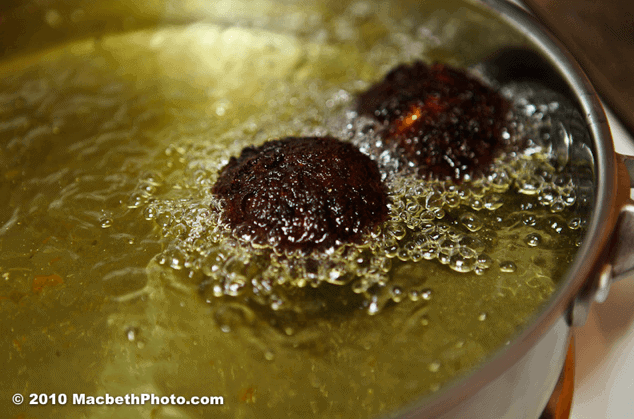 After the oil was at a sufficient “cook-instead-of-burn” temperature , we started getting some golden brown results. 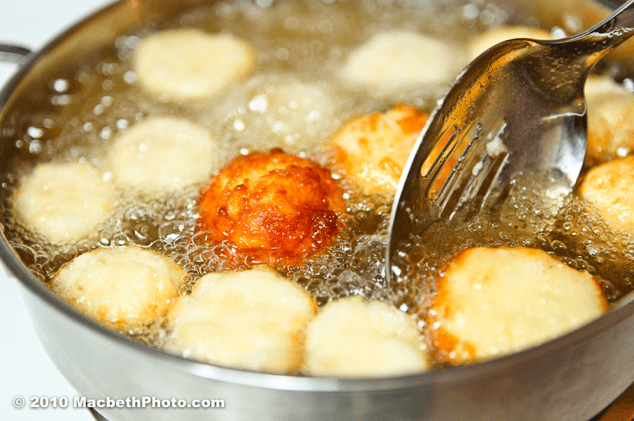 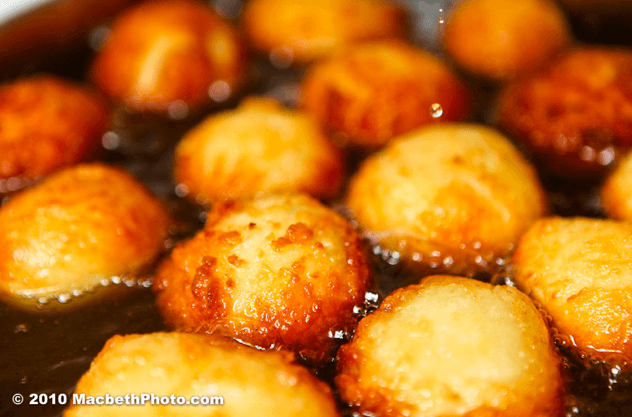 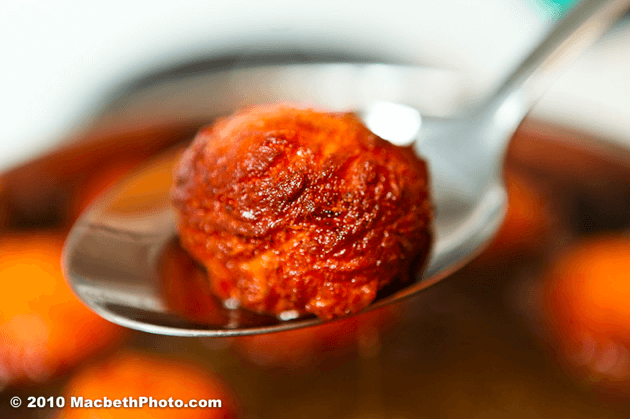 The syrup is being made.

This is similar to a simple syrup used in drink making … only with rose water and honey.  Bring sugar and water to a boil, then add 2 tablespoons of rose water.  I also added two tablespoons of honey after it cooled. 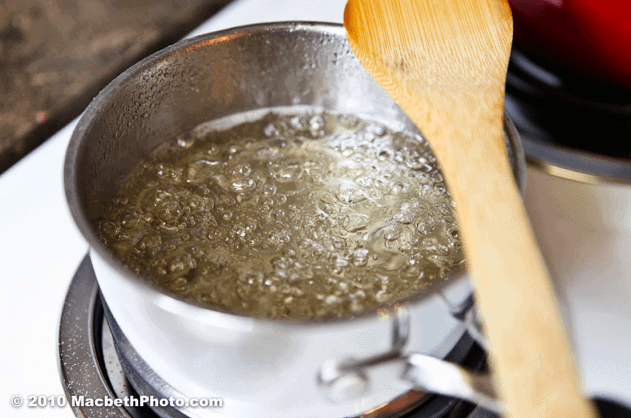 Pour the sugar water over the gulab jamun and let it soak in. 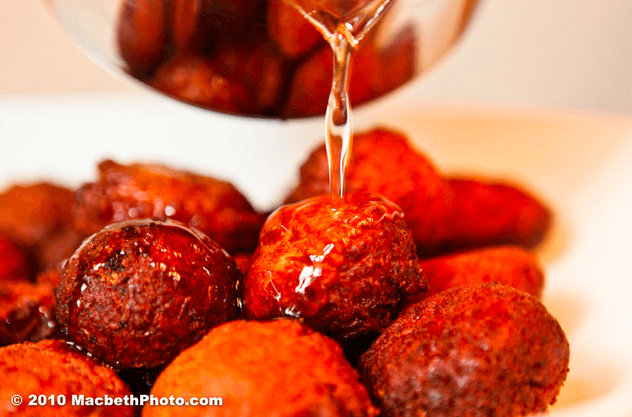 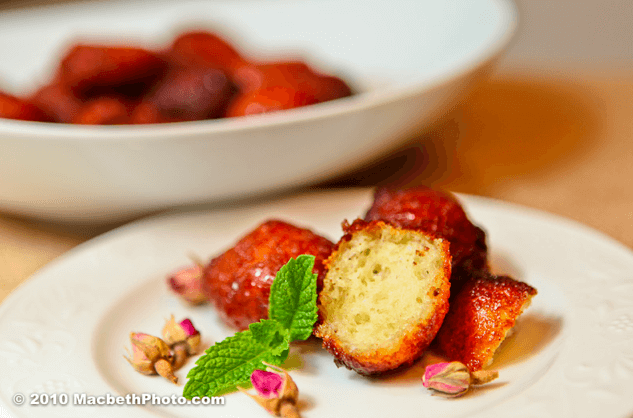 from the kitchen of Nirvana Beverly Hills

3 pints of oil for deep frying

Make the sugar syrup first: In a heavy saucepan bring the sugar and water to a boil, then let it thicken by cooking over medium heat for about 20 minutes. Add the rose water and keep the syrup warm at a low simmer.

In a large bowl mix the ingredients for the dough thoroughly to make a still batter. Let mixture sit for 10-15 minutes to set. Take a pinch of dough a little smaller than a golf ball and roll it between your palms to round it into a neat ball.

Repeat with the rest of the dough.

In a wok or heavy skillet, heat the oil over high heat until a haze begins to form, just before it begins to smoke. Carefully add the balls until the surface is covered. (If necessary cook the balls in more than one batch.) With a large spoon, start turning the balls just as they begin to take on color. After about 3 minutes, turn the heat down to medium-low, and continue to turn the balls until they acquire a rich mahogany color.

When the sweetmeats have achieved a luscious, deep color, turn the heat up to high for 2-3 minutes to add still more color and to firm the crust. Drain onto paper towels.

When drained, put the balls into a large bowl and pour the sugar syrup over them. Let them rest until the syrup reaches room temperature. They can now be eaten – but they will taste even better if allowed to “tighten” until the next day.

NOTE: Gulab Jamun will keep a week or more, stored in the refrigerator.

Wash roses thoroughly in cold water. Pick off all the petals, reserving a few for garnish; put the remainder in a large ceramic jar. Pour the cool water over them and set them aside in a dark place (away from any sunshine) for at least 4 hours. Strain the rose water and discard petals.