Have you been hearing a lot about mirrorless cameras lately?  If not, you’re in for a treat.  They’re very similar to a DSLR, with an interchangeable lens and great image quality, only they’re a lot more light weight without the mirror and optical viewfinder.  After lugging around my three pound DSLR on a trip earlier this year, and barely using it since it was such a hassle to pack/unpack/repack during our hectic travel schedule, I decided right then to start researching mirrorless cameras.

Right away, I found that most have all the manual controls and optional lenses of a DSLR, but with the lightweight portability of a point-and-shoot. Professional quality photos from a compact camera that can practically fit in your pocket?  That factor alone had me instantly sold!  Most mirrorless cameras also now have built-in wifi capabilities and really impressive video recording options too.

When it came time to research the different cameras available before investing in a new purchase, I must confess, it got a bit mind numbing trying to discern their difference in their features in order to find the right camera to fit my needs.  I spent hours comparing all the technical specs and the model numbers start looking like garbled “@!%^&*” to me.  So, to try and help you avoid the same eye strain and headache I went through, I’m posting my mirrorless camera research here to help make your shopping a bit easier.

A FEW THINGS TO NOTE ABOUT MIRRORLESS CAMERAS

Most mirrorless cameras now are pro-sumer grade with a good mix of automatic as well as manual controls.  There are also a few professional options that have a full frame sensor and weatherproofing that would be worth the investment if you’re a professional photographer.  My notes here are for the pro-sumer lines that are perfect for travelers, hobbyists, and bloggers.

Also, the technical specs on the cameras listed below were all about the same, so it really came down to their handling and placement of manual controls, with a few minor differences between each. I went to our local camera shop and tried them out before purchasing, but took notes of the pros and cons for each that I’ve included below.

FEATURES THAT ARE SIMILAR IN THE FOLLOWING MIRRORLESS CAMERAS

First, let’s talk about what they have in common.  Here’s a list of their similar features:

— All are super lightweight, making them perfect for travel.
— Wi-Fi connectivity that works with your phone or tablet.
— All have optional interchangeable lenses, though some more than others.
— Tilting Display (not all are touchscreen).
— Shoots both JPEG and RAW
— A selection of fun creative modes including panoramic shots and handheld night scene modes.
— Most have great style options, either coming in a sleek all-black or a more retro edition with silver and leather trim.
— All pretty comparable when it comes to video recording, with the exception of the Fuji which has an external mic output which is a great bonus feature for vloggers.

Two More Things To Note:
— Olympus and Panasonic are both Micro Four Thirds, so you can interchange the lenses between the two.
— Canon has come out with a mirrorless camera recently, but it was a bit too point-and-shoot to me.

They’ve come quite a long way since I’ve last invested in a new camera and have so many great features that I might just end up using my new mirrorless camera exclusively.  I’ll let you know which one I ended up purchasing and why below. 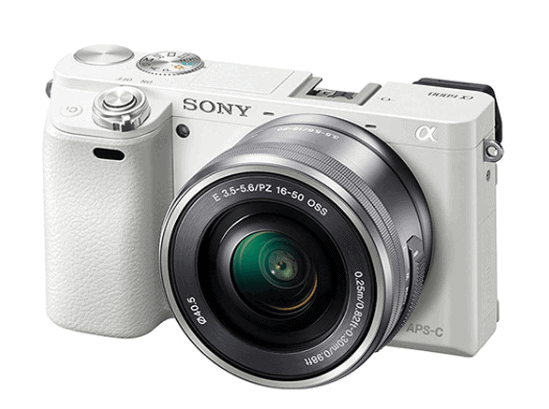 My Take:  I tested this SONY Alpha a6000 out at our local camera shop, and I have to confess, I let out an audible “whoa” when I saw how fast the focus was.  When I took a photo, so many detection points lit up that it looked like a spider web had caught the image.  And it was fast!  On the downside, the menu options on the screen were not very intuitive, and coming from a DSLR, I found this to be a bit frustrating.  Also, the shutter is pretty loud, which is okay if you’re outside or at a sporting event.  But if you’re planning a trip to Europe and want to sneak in a few shots of the beautiful stained glass in a cathedral, this is not a quiet camera.  I was told that Sony’s APS-C Sensor in general will be better in low light than a Micro Four Thirds camera, but after using the Olympus OM-D M-10 II, I don’t find that to be the case.  At least not to the naked eye.

Best For:  Travelers that want a point-and-shoot with great autofocus features for activities like sports.

PROS
— Great price point. Can get camera and basic kit lens for around $700
— Smallest and lightest of the cameras listed here, but still has a great ergonomical grip
— Handheld Twilight Mode
— The Auto Focus uses both a 179-point phase-detection system and 25-point contrast-detection system
— USB Charging 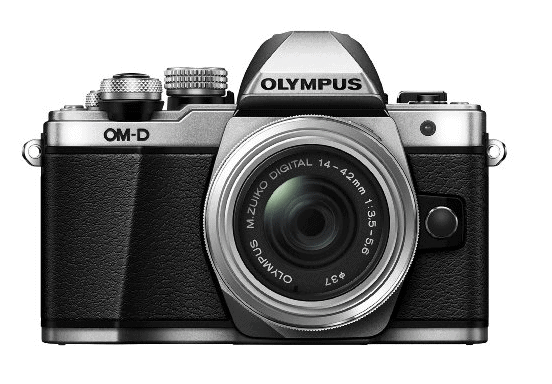 My Take:  I loved the feel of this camera in my hands the most.  The dial controls on the Olympus OM-D M-10 were similar to my Canon DSLR and there’s also a lot you can manually adjust using the touch screen which makes it very intuitive to use.  Both this Olympus as well as the Panasonic below have a Micro Four Thirds lens mount, so there are lots of lens options and they are interchangeable between each other.   For zooming, in general you’ll get more range with a Micro Four Thirds camera versus Sony’s APS-C sensor.  The “big brother” to this camera is the Olympus OM-D E-M5 and is weather proofed and has a rotating screen instead of a tilt screen.  It’s a bit more expensive, but you can usually find better pricing if you go with an all black body versus their silver and black model.

One other thing I was really impressed with is the Scene Select modes available to quickly make adjustments based on the scene at hand, which when you travel, can change several times in just one afternoon.  While I prefer to shoot in Aperture Priority, sometimes it’s nice to be able to make a quick adjustment and go automatic when you’re on a fast-paced tour.  Here are the many scenes available:  Portrait, e-Portrait, Landscape, Landscape + Portrait, Sport, Hand-held Starlight, Night scene, Night + Portrait, Children, High Key, Low Key, DIS mode, Macro, Nature Macro, Candle, Sunset, Documents, Panorama, Fireworks, Beach & Snow, Fisheye Conv., Wide Conv., Macro Conv., Panning, and 3D.

This ended up being the camera I purchased.  I’ll have a full review about it up on the site soon.

Best For:  Photographers that are used to a DSLR, but want something more lightweight. 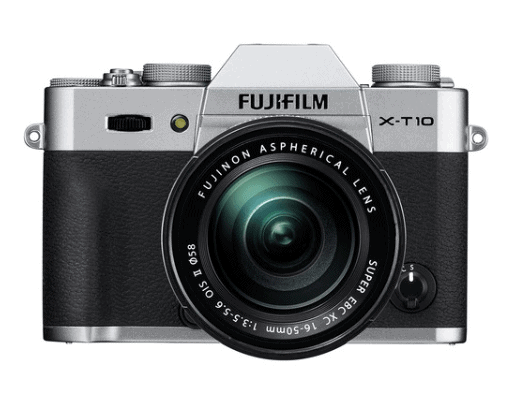 My Take:  I loved the retro design of this one, similar to the Olympus. And the Fujifilm X-T10 has plenty of manual controls, but the dials on this one seemed foreign to me. I’m used to my Canon DSLR, and didn’t think having the ISO or Exposure settings on dial were a worthwhile feature.  I guess it’s just what you’re used too, and when shopping online, I highly recommend looking at photos of these cameras overhead and from the back so that you can see how the dials and controls look.  This camera does have an Intelligent Hybrid Auto Focus similar to the Sony above,  and it also has some fun film simulation modes if you’re into that sort of thing.

Best For: Photographers who want easy access to changing ISO and exposure. 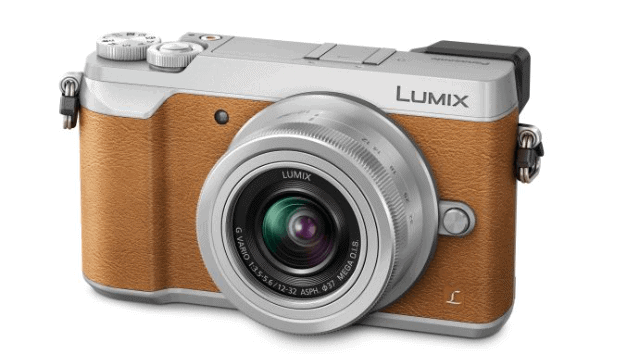 My Take:  My friend Julie reviewed the older version of this one on her blog, The Little Kitchen.  Knowing that she’s a professional food photographer and seeing her have a pocket-sized camera at different events is what really motivated me to start researching mirrorless cameras.  Both this camera and the Olympus have very similar features, with the only big difference being that the Lumix mirrorless camera offers 4K video recording.  Impressive, right?  Especially for such a small camera.  The Olympus has more contrast detection for auto focus points (81 vs the Lumix’s 49 points), but overall, they’re pretty similar cameras.  At least since they’re both Micro Four Thirds, I’ll still be able to share lenses with my friend!

Best For:  Photographers used to a DSLR, but want a lightweight compact camera. 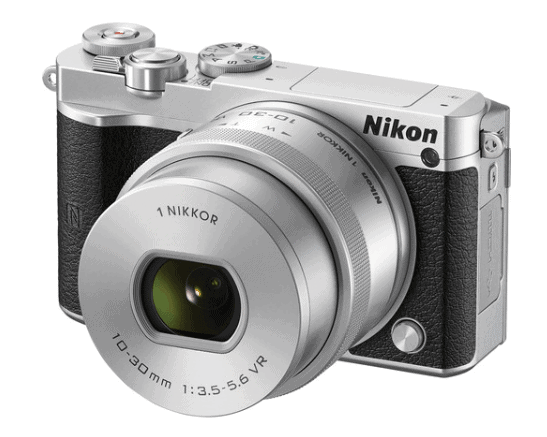 My Take:  This one still just isn’t evolved enough for me as it seemed more like a point-and-shoot than a DSLR.  However, the image quality specs still look great, and I think if you’re primarily vlogging or shooting video, this camera is definitely for you as the screen flips up a full 180 degrees so you can check your shot, selfie-style, before recording.  This camera also has Glamour Retouch modes for making automatic adjustments to faces such as softening skin, and whitening eyes and teeth.

Best For:  Vloggers due to it’s flip screen and Glamour Retouch.  You can easily set it up and see your shot if you’re on camera.

They’ve come quite a long way since I’ve last invested in a new camera and have so many great features that I might just end up using my new mirrorless camera exclusively.  The only downside I’ve read about with mirrorless cameras is shorter battery life since it’s used to power the screen and sensor.  I’ve used my Olympus now on two trips and found that the battery lasted all day when shooting photos and uploading them to my phone via the wireless connection.  That might change a bit if I was shooting video, though.  It’s always a good idea to have one or two backup batteries when traveling anyway.

Disclosure: Some of the links in this post are “affiliate links.” This means if you click on the link and purchase the item, I will receive an affiliate commission. Regardless, I only recommend products or services I use personally and believe will add value to my readers.

Want to save these ideas for later?  Pin it! 🙂 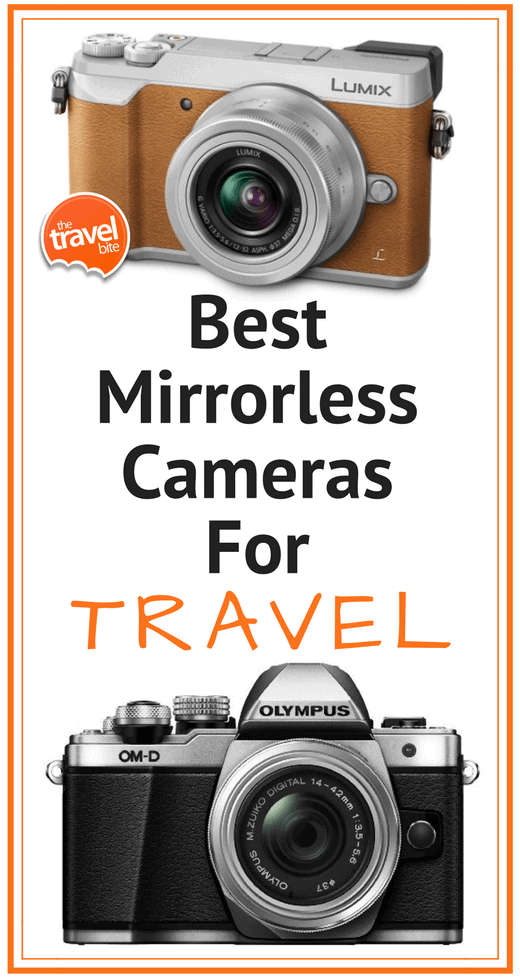