Time Warp Back To 1990-Something – The Travel Bite

Get my free travel planning guide full of helpful travel tips and packing lists.
You are here: Home / Blogging / Time Warp Back To 1990-Something

Spawned by an old photo that Jeremy Branham (Budget Travel Adventures) posted on Google+, I started flipping through an old photo album to find my first international trip.  It was pre-digital anything. There was no Facebook, Twitter, Instagram or blog to share experiences with family, friends, and the world.  Just a teenager with an extra large suitcase and a couple of roles of film. 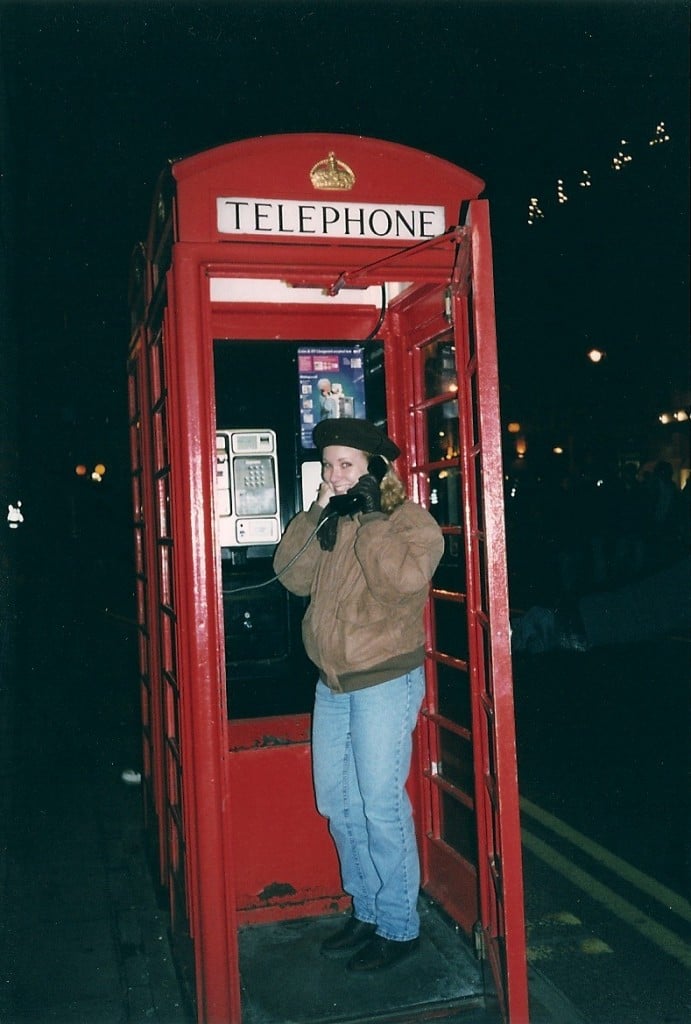 This is me, circa 1990-something.  (Diggin’ the dorky hat, bleach blonde hair, and bulky 90’s leather bomber jacket?)  I had just spent my birthday on a Continental flight to Birmingham, England, leaving the United States a sweet 17 years of age and landing in the UK as an official ‘adult.’  It was over the holidays, and I thought I was pretty clever planning to spend New Years Eve in a country where I could legally drink.  Heh.

My roundtrip flight cost $389 and I purchased it on campus at the university’s travel agent.  Purchasing flights on the web was unheard of.  In fact, my first email account was only about a year old at the time.  I used to say I was going to the computer lab to ‘play’ email.  This was back when your inbox was 20 stupid jokes and there were TV ads still promoting use of the internet as the ‘information super highway.’  Remember those?

As for luggage, I brought one big suitcase that had tiny little wheels.  If I didn’t roll it in straight line, it would tip over.  And that was hard to do with the little dog collar-like handle that was built in for pulling the thing.  The bright side was the airline didn’t charge me extra to bring it.

As for photos, my cell phone certainly didn’t take any.  It was a Nokia the size of a brick.  I do remember bringing 3 rolls of film and there were 36 shots per roll for a total of 108 pictures.  I thought that was a lot.  Now I usually come back home from a trip with 800+ new photos on my iPhone.  The three rolls of film cost me about $50 to develop and I had to wait a whole 2 days to see them since 1 hour photo development was too expensive for my college budget. 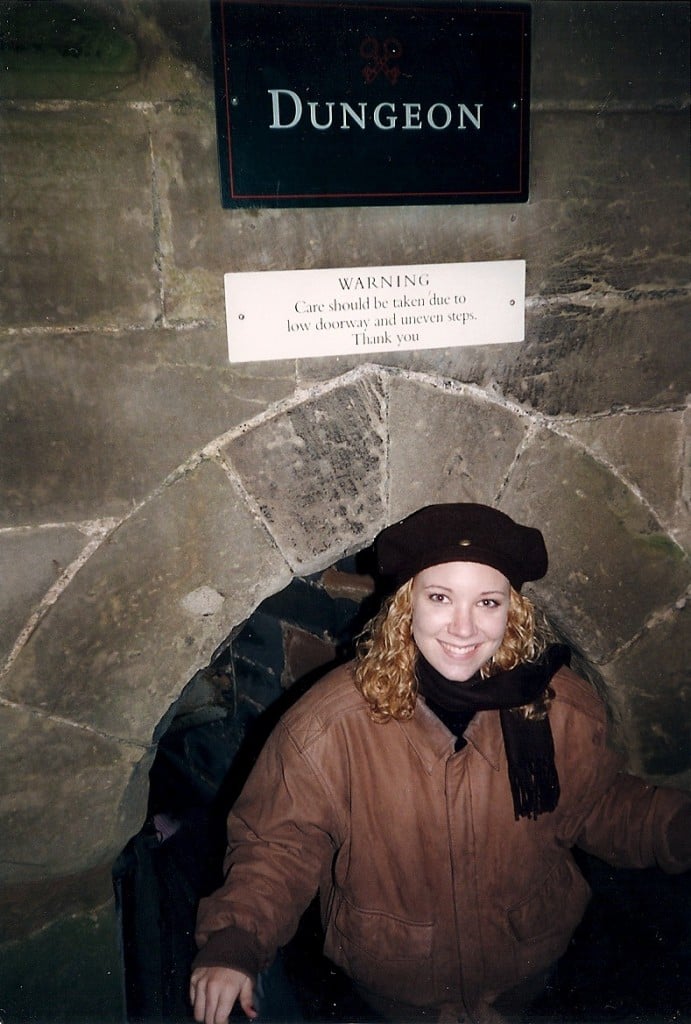 And forget about making a call!  Just leaving the city racked up roaming charges, let alone leaving the state or the county.  Instead of a text message or quick email, my parents checked on my safety by listening to the news and being thankful they didn’t hear of any plane crashes that day. (Remember, this was before you could instantly look up flight information at the click of a button.)

Am I old?  Naaaaah.  Technology is just improving that much quicker.  Wonder what we’ll be talking about just 10 years from now?  Perhaps we’ll just have to double blink to take a photo or say “beam me up to Paris Scotty!” in order to get from NYC to France.

Back in college, I was taking classes such as Women In Film and Screenwriting 101 while preparing to enroll in a new program for “PR.”  I wanted to work in the TV and travel industry, I just didn’t know what capacity.  I have to say, life has turned out better than I could have imagined!

If I had blogged back then, I imagine this is what I would have said …

I arrived just about a week ago and already feel like I’ve seen so much.  We climbed the turrets and crawled through the dungeons at Warwick Castle and visited Stratford-Upon-Avon to see Shakespeare’s birthplace.  The scenery is great, but the food is horrible.  Everyone looks at me funny for not adding milk to my tea.

We spent an afternoon up at Cambridge, but didn’t run into any cute guys. (Remember, I’m 18) I bought myself a t-shirt and found an old map in an antiques store that I purchased for my Mom.  It had a slight tear in it, so I was able to bargain down the price. 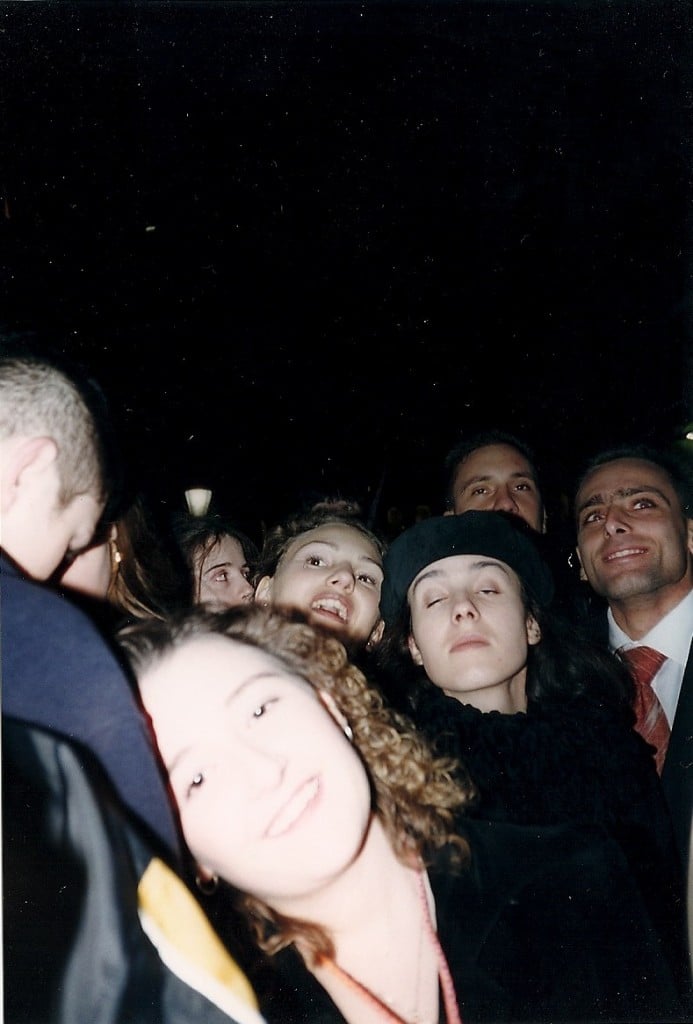 New Years Eve was disaster … but still quite fun.  We took the train down to London and walked over to Trafalgar’s Square.  My friend said it would be the perfect place to count down to midnight, but she must have been mistaken.  There was absolutely nothing but a bunch of pooping pigeons.  As the night progressed, it did get packed elbow-to-elbow full of people all standing around waiting for something to happen.  The police lined up along the edge of the fountain which was drained empty without even a drop of water.  Turns out, some drunken fool drowned in the fountain last New Year’s Eve, so that explains the police but not the lack of eventful activity.  There was no music, countdown, or ball drop.  We all started joking that the police were going to whip off their uniforms for a ‘full monty’ kind of show at midnight.  I met a pretty cute Italian and dreamed I’d get to kiss him at midnight.  He was a bit older than me.  All I got was this lousy picture through the crowd.

After midnight, there was a weird silence … no ball drop or announcement of any kind for the New Year.  After awhile, people started cheering and hugging and kissing perfect strangers.  (I should have been closer to that Italian guy!)  It was an imperfect night that turned out to be just perfect.