During our latest cruise on Carnival Vista, I was excited to visit a new-to-me destination: Aruba! Just off the coast of Venezuela, Aruba is a Dutch island with rocky, desert-like landscapes along the northern side, and sandy beaches and coconut palms along the southern coast. With such a variety of picturesque landscapes, we booked the North Coast Jeep Safari excursion to explore the whole island during our day in Aruba. 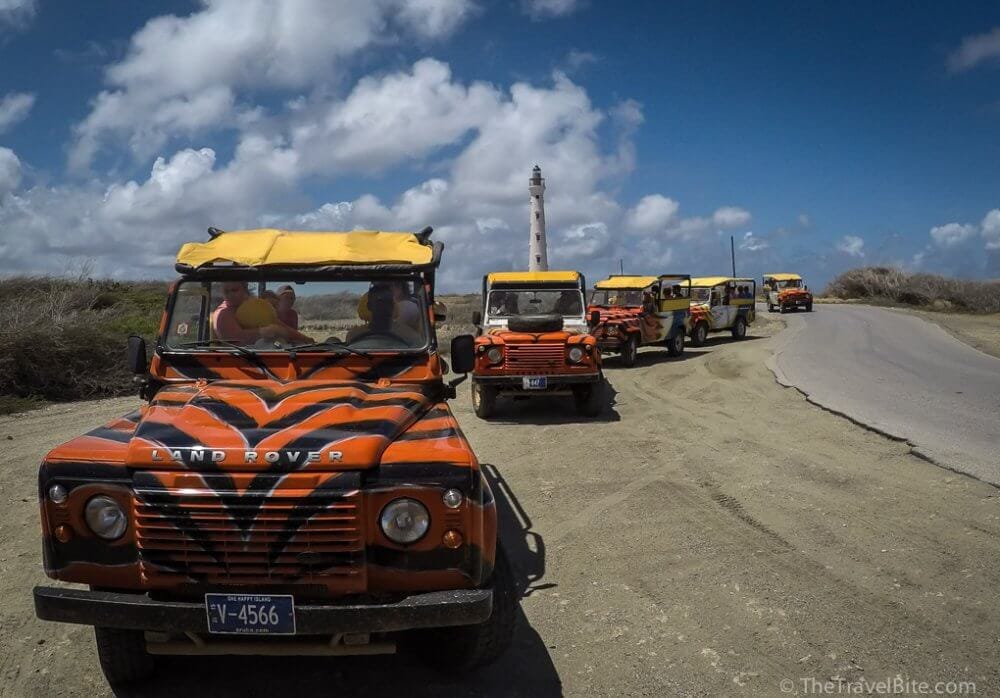 Once we arrived in port, we met our group at the dockside shops and walked half a mile to a large parking lot full of 4×4 safari-style vehicles. After a quick drive outside of the city, we rode out onto rolling hills of dirt roads for a bouncy theme-park-like ride into Aruba’s rocky wilderness. It was really fun to experience what our vehicles were capable of when off road, and even more so when we saw the normally inaccessible places they could take us to. 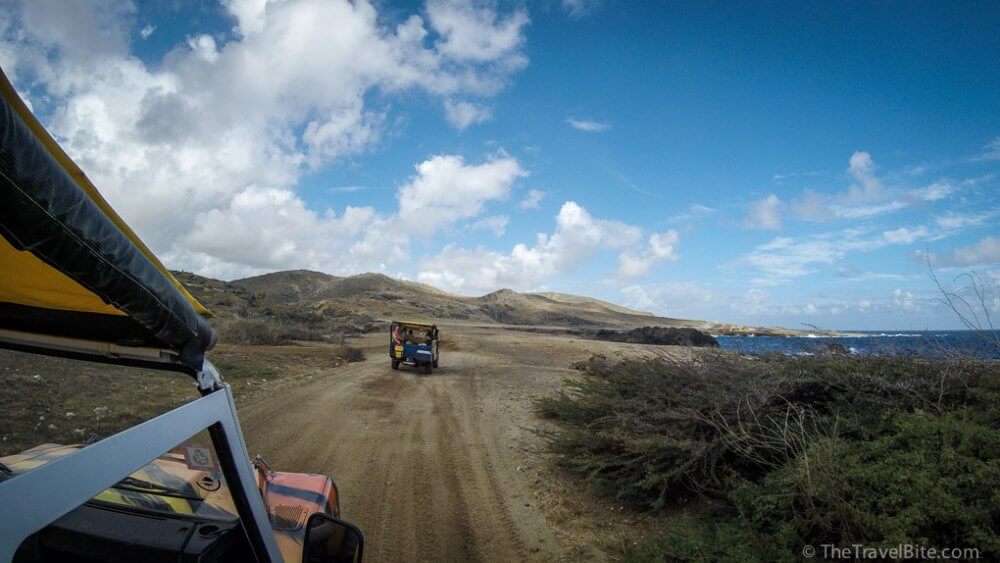 Here are some highlights from our excursion as well as a few tips about what to wear and bring in your day pack.

We heard two different stories about how Aruba got its name: one, that it came from Spanish and native slang, “oro ruba,” which means “red gold,” and the other that it was “oro huba,” meaning “there was gold.” Either way, adventurers have been traveling to Aruba for quite some time, and at one point their attraction wasn’t the cerulean water and beautiful beaches, but a gold rush!

Bushiribana Gold Mill Ruins are remnants of this part of the island’s history. Located right on the beach, it looks like a stone fortress surrounded by a Rock Wish Garden where visitors place stacks of stones balanced on top of each other. 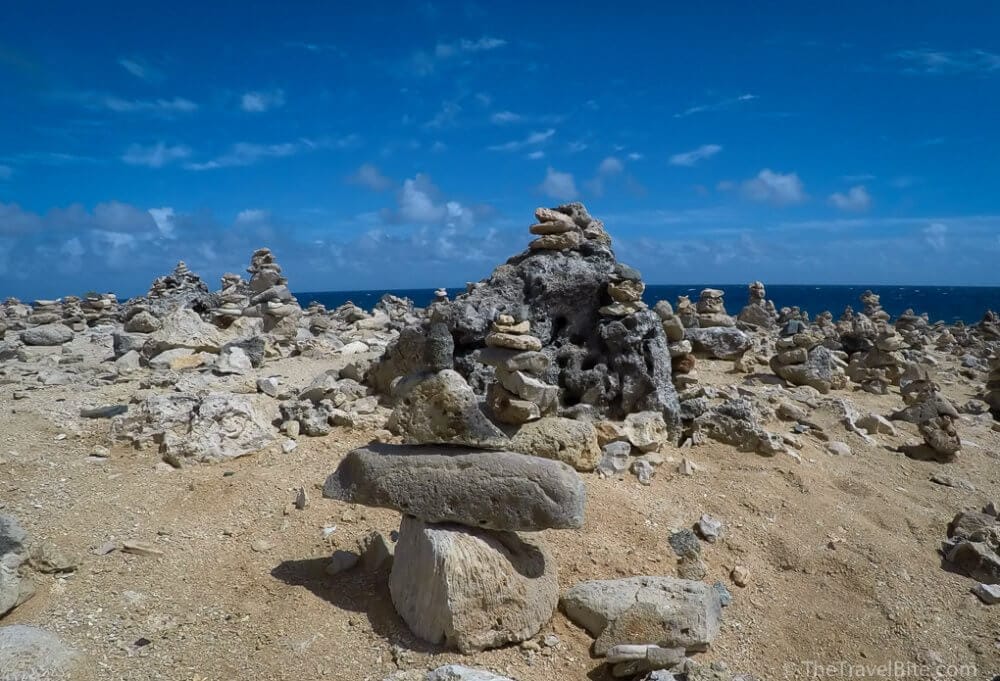 One of our stops was at a farm, Aruba’s Donkey Sanctuary, a rescue organization committed to providing care for Aruba’s wild donkey population. Donkeys were brought to the island over 500 years ago by Spanish explorers as a mode of transportation for the rocky island. Now, the ancestors of those original island donkeys are well cared for and spoiled at the Donkey Sanctuary. They were so cute to see!

Aruba is known for natural ocean-carved limestone bridges along the north coast. The largest of these bridges collapsed in 2005, but there are still so many breathtaking formations to see. I found the bridges to be a gorgeous setting for photographs, and we loved watching the ocean waves ebb and flow along these limestone caves. 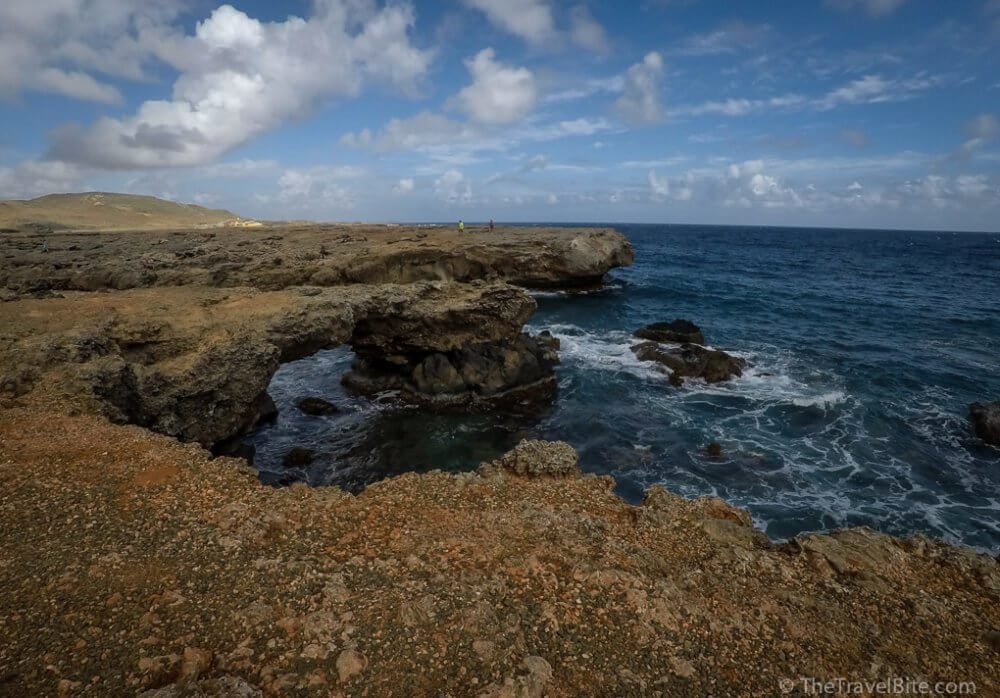 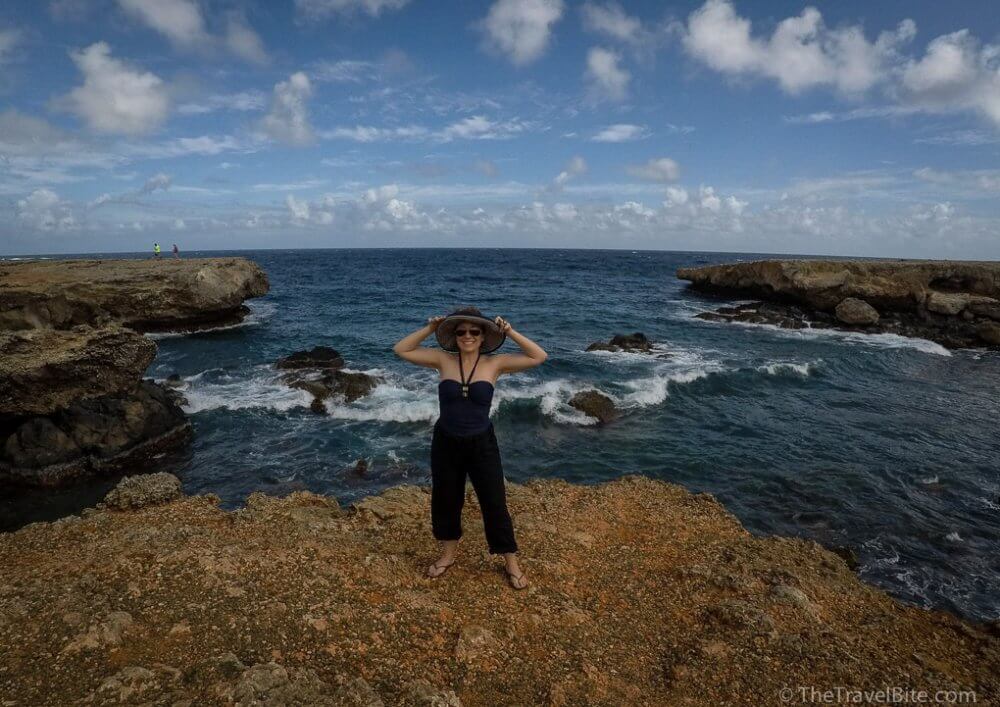 Set high above the sea with an incredible view of the ocean is Aruba’s first Roman Catholic Church, the Alto Vista Chapel. The original was built in 1750, but was reconstructed in the 1950s. Just outside the chapel, street carts sell fresh coconut water straight from the palm trees. It was the perfect spot for rest and reflection. 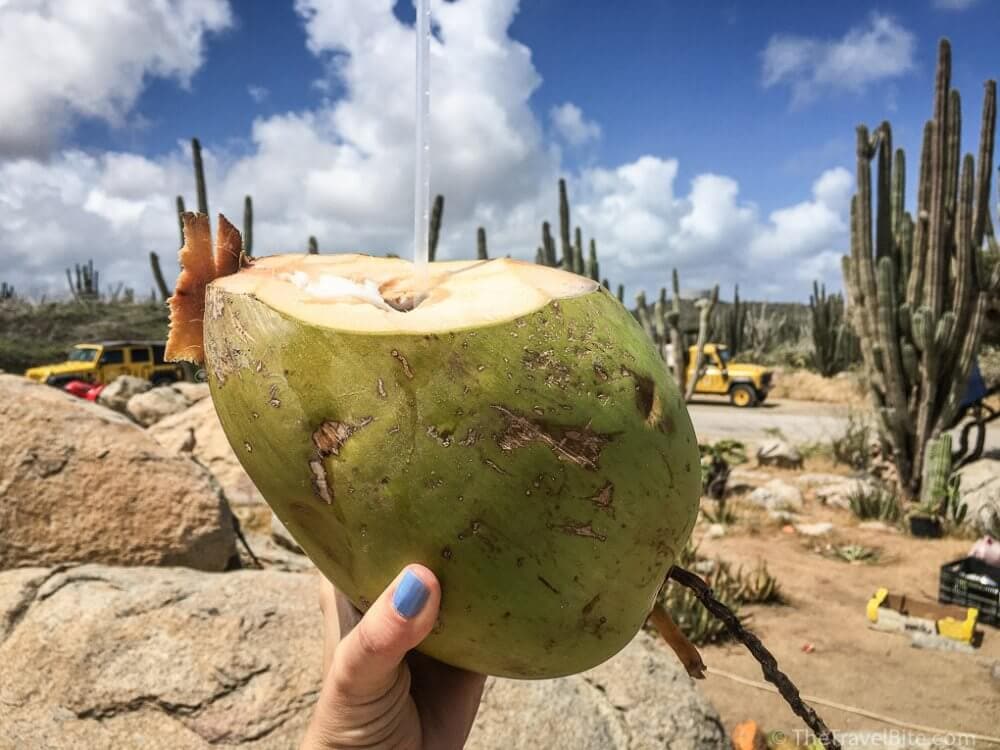 Once we arrived at the northern tip of the island, we immediately saw one of Aruba’s most iconic landmarks, the California Lighthouse. It was named after a ship that sunk before its construction in 1910, the S.S. California. Today, it is a popular spot for visitors, not only for photos of the lighthouse, but for the view of the sandy southern coast beaches below.

After a morning full of adventure, it was nice to end our tour at Arashi Beach for a little rest and refreshment. Always on the lookout for new foods to try, I sipped this non-alcoholic carbonated drink made with barley and hops. It had a flavor I’d describe as a cross between carbonated ice tea and the slightest hint of cocoa. What a treat! 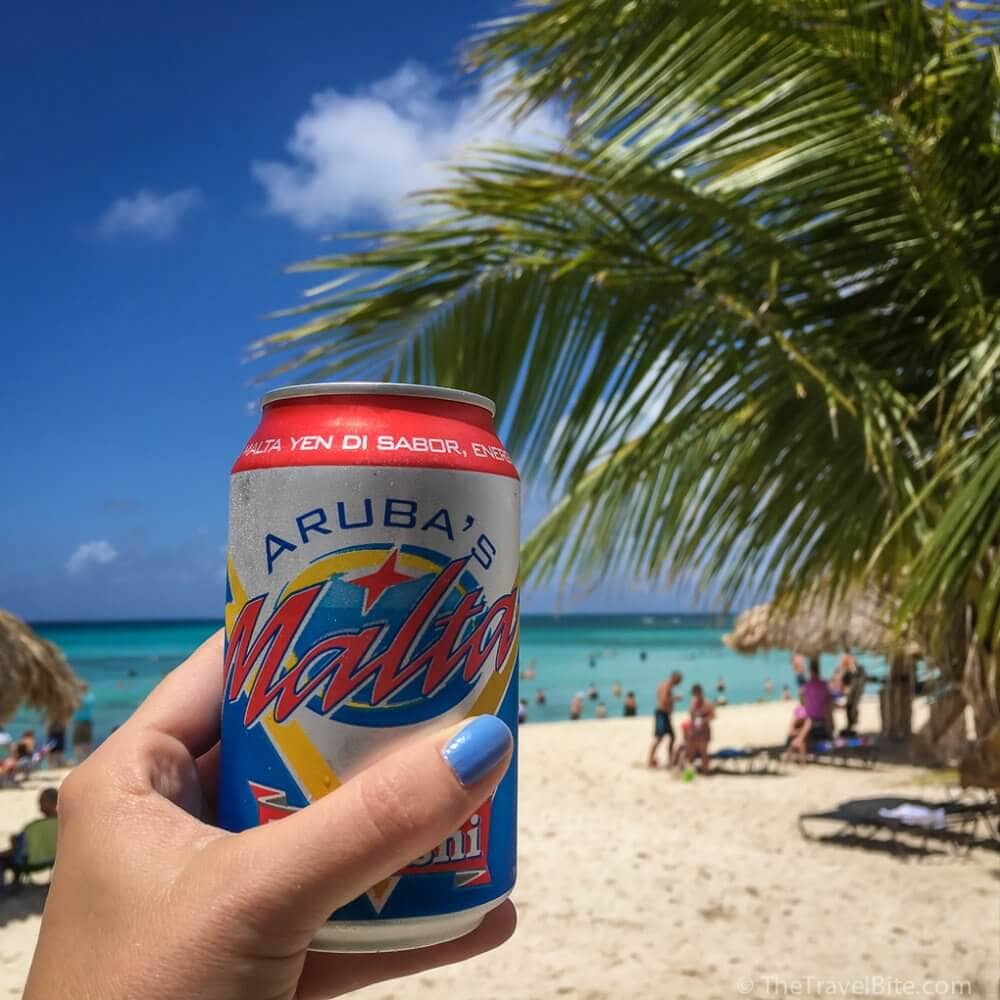 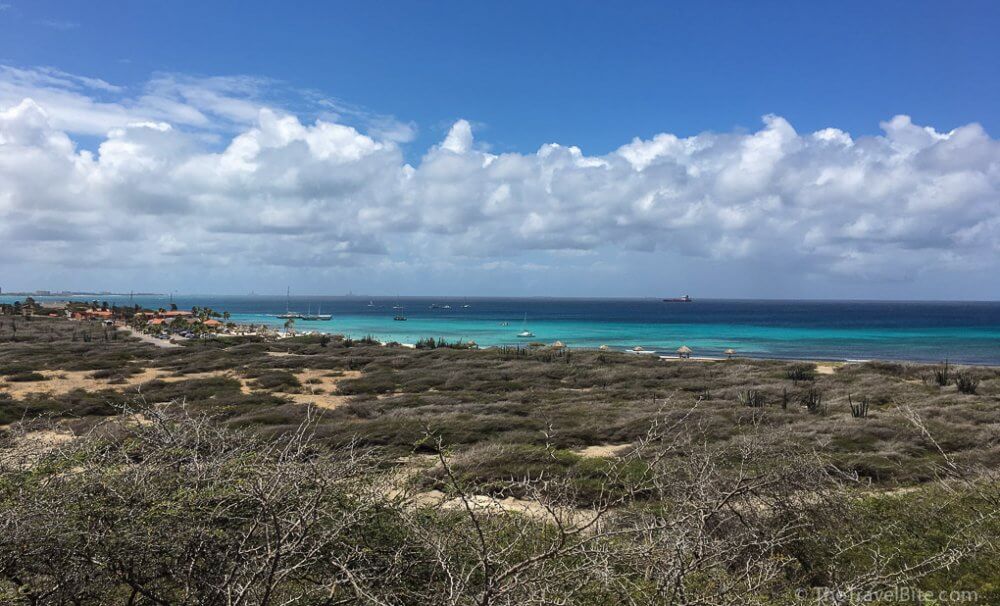 Planning on taking this Jeep Safari Excursion in Aruba? Here’s what to bring:

This post was created for Away We Go with Carnival, the destination for getting in the getaway state of mind.