Going on a Cooking Safari in Cape Town – The Travel Bite

Get my free travel planning guide full of helpful travel tips and packing lists.
You are here: Home / Destinations / South Africa / Going on a Cooking Safari in Cape Town

Going on a wild game safari to see the Big 5 is on everyone’s list when visiting South Africa. But, did you know you can also go on a cooking safari?  There’s plenty of delicious foods to taste here that you won’t find anywhere else in the world and I’ve got a new “Big 5” to add to your list of Cape Town must-sees.

Our safari began in the colorful former township of Bo Kaap at the Bo Kaap Museum, known for being the historical center of Cape Malay and Islamic culture in Cape Town. This is where my new friend Natalie and I met up with our guide, Sabelo.

Now, what exactly is “Cape Malay?” you might ask. Cape Malay is a community of people whose ancestry is from the Melayu Kingdom which is now Malaysia and Indonesia. Brought here as slaves by the Dutch East India Company, Cape Malays gained their freedom and developed a rich multicultural community full of it’s own traditions and flavors that are as diverse as the vibrantly colored homes of the neighborhood.  The quaint museum is located in a nineteenth century home and displays the transformation of this community exhibiting their struggles, triumphs, celebrations, and even cooking. It’s a great place to start and get a sense of the area’s history and culture.

After an introduction to Bo Kaap at the museum,  we walked across the street to the spice market to take in the rich aromas and learn more about the spices used in Cape Malay cooking including fennel, cumin and coriander.  Because there are so many spices, it’s customary to get a special blend, or “masala,” to make the curries and other flavorful Cape Malay foods.

Sabelo tested our foodie knowledge by having us close our eyes and identify individual spices just on scent alone.  Natalie aced it!  Unfortunately, I failed at this quiz multiple times.  I’m not sure if I was just overwhelmed by the exotic scents, but I took comfort in the fact that we’d complete our safari with a Cape Malay cooking lesson where I could learn more about this cuisine.

Right next door to the spice market is the Rose Corner Cafe, known for having the best koeksisters in town.  Not only do I love the taste of these sinfully sweet treats, but I also adore that the pronunciation of them sounds like “cook sisters.”  I joked with Natalie that by the end of the day we
would indeed be “cook sisters.” 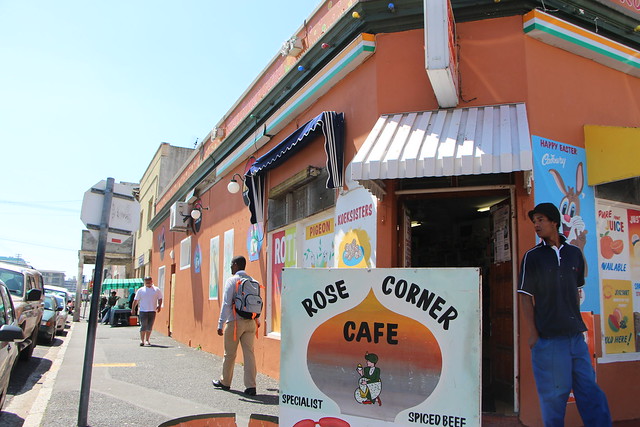 Now, while in Cape Town I saw two different varieties of koeksisters.  One was hard and sticky like a candy twisted into the shape of a pretzel.  The other variety, which my new Malay friends said were the “true” koeksisters, were more like cinnamon spiced donuts soaked in honey and sprinkled with shredded coconut.  They are indulgent in every sense of the word. 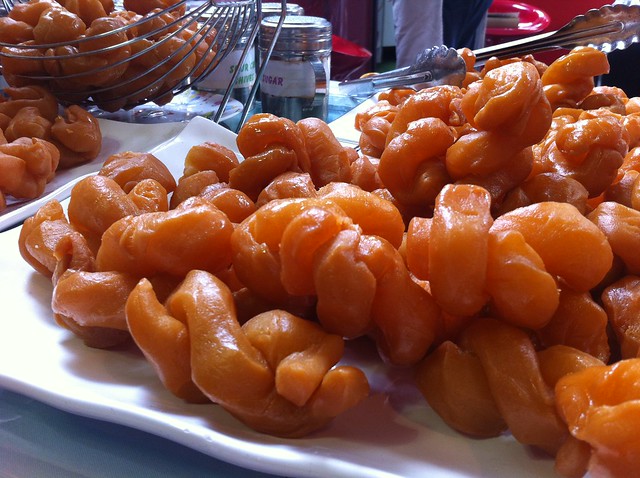 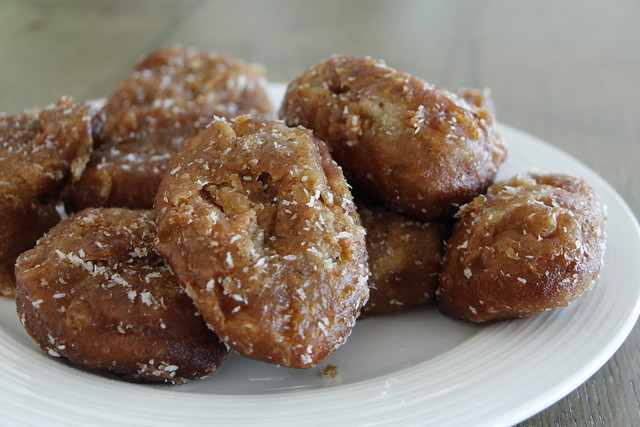 After nibbling on some koeksisters and going for a walk around the colorful homes of Bo Kaap, we finally made our way to the private residence of Amina, our host for the afternoon cooking lesson and lunch.  She greeted us with a “falooda,” a sweet milky drink of rose syrup, milk, and tukmaria (kind of like tapioca).  It’s a welcome drink and it’s customary to say “biesmillah” when receiving it as a sort of cheers that means “blessings and gratitude.”

Amina also taught us another important word in their custom, “ubuntu” meaning “Humanity.  I am because we are.  Coexistance.”  Ubuntu is the perfect way to describe this experience as I feel that we Americans are timid and sometimes fearful of Muslim culture because of the way our media portrays the Middle East.  Amina’s warm smile and delicious smelling kitchen instantly bridge that culture gap.  There’s no better way to make friends than to break bread with them and learn about their culture through sharing in the experience of a tasty meal.

We rolled up our sleeves and joined Amina in the kitchen to make curried chicken as wells as samosas, a type of savory stuffed pastry, and roti, an a flaky and buttery flat bread that Amina taught us to make from scratch. 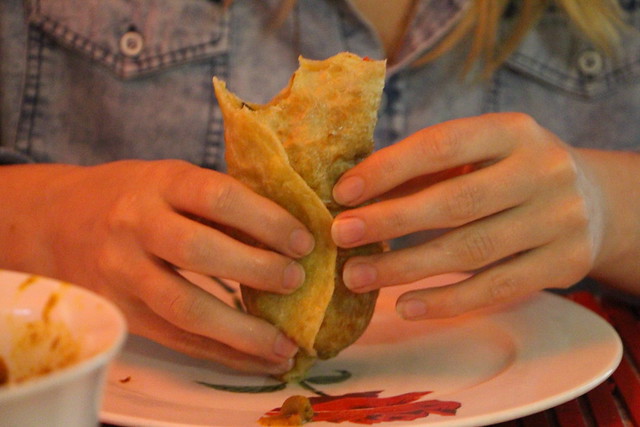 In addition, Amina had pre-prepared for us some chili bites,  fried breaded dumplings made with chick pea flour, spinach, potatoes, onions, eggs, garlic, and curry spices.  As I discovered, the best way to eat the curry was to roll it up in a roti like a burrito.  By the end of the day, Amina gave us our last language lesson and taught us to say “barakat,” which is essentially a doggie bag to take home leftovers. 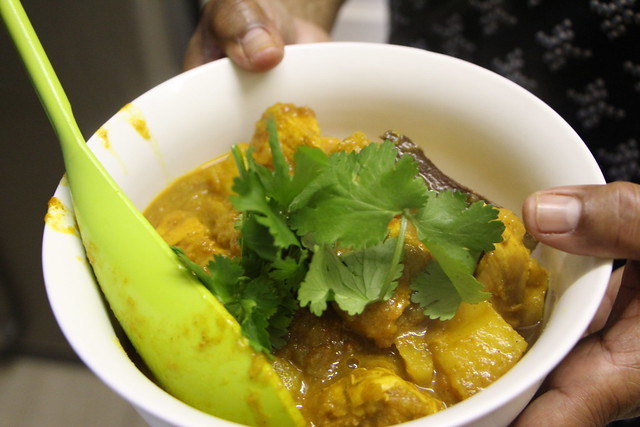 Even with our bellies full of food, we still had one more stop to make to make our foodie safari complete. The corner restaurant and deli right across the street from Amina’s house advertised Gatsby’s in their window.   When I first arrived in Cape Town, I got lots of tweets and messages that said, “You must try Gatsby!”  Considering F. Scott Fitzgerald’s book and the recent movie, I thought it might be a classy cocktail.  Instead, it’s a colossal sandwich!   Imagine the biggest American hoagie our sub piled high with everything imaginable, including French fries; that’s a Gatsby.  So ordered one to save for later and share, though instead of taking a big bite I only ended up taking pictures of this legendary sandwich. 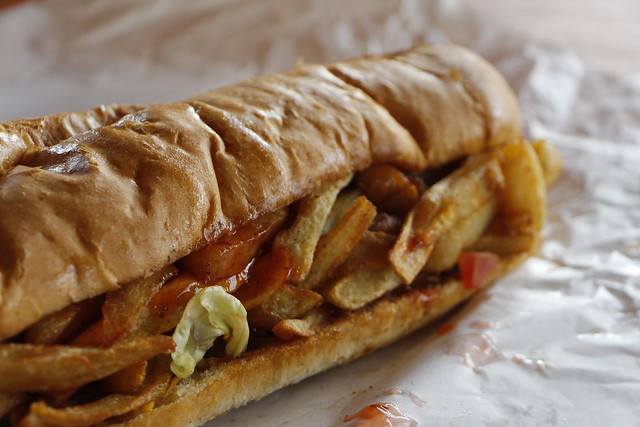 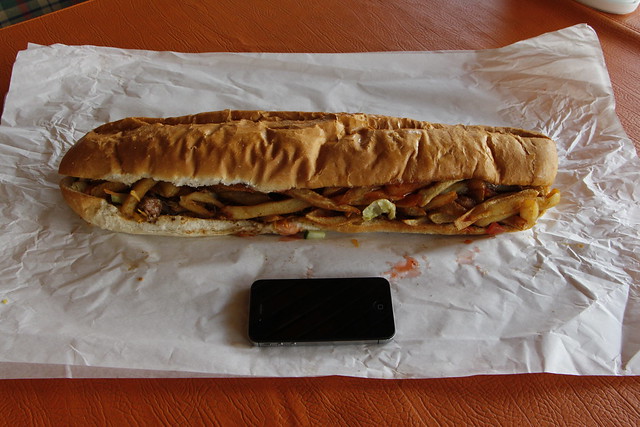 The next day, Natalie surprised me by posting a  video of our day exploring Bo Kaap and cooking with Amina that captured the essense of our fun experience.  Cook sisters forever!   There certainly is a lot to see and taste in Bo Kaap, so to re-cap, here’s the cooking safari “Big 5” you’ll want to be sure not to miss:

– A cooking lesson and lunch of falooda, curry, samosas, roti, and chili bites. (That’s a tasty “Big 5” right there!)

If you’d like to book a Cooking Safari, check out Andulela.com 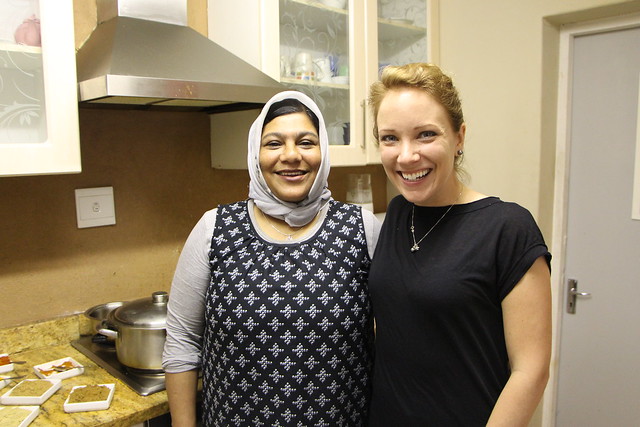 My visit to Cape Town was sponsored by the Cape Town Tourism Board as part of the #LoveCapeTown campaign by iAmbassador. As always, my thoughts, opinions and enthusiasm for travel and food are entirely my own.

Want to save this idea for your travel planning? Pin it! 🙂