This decadent recipe for a bourbon peach bread pudding originally appeared on my bed and breakfast blog! It is SO good. Bread pudding is one of those desserts (or breakfast, not judging) you can usually make with items already in your pantry and refrigerator. 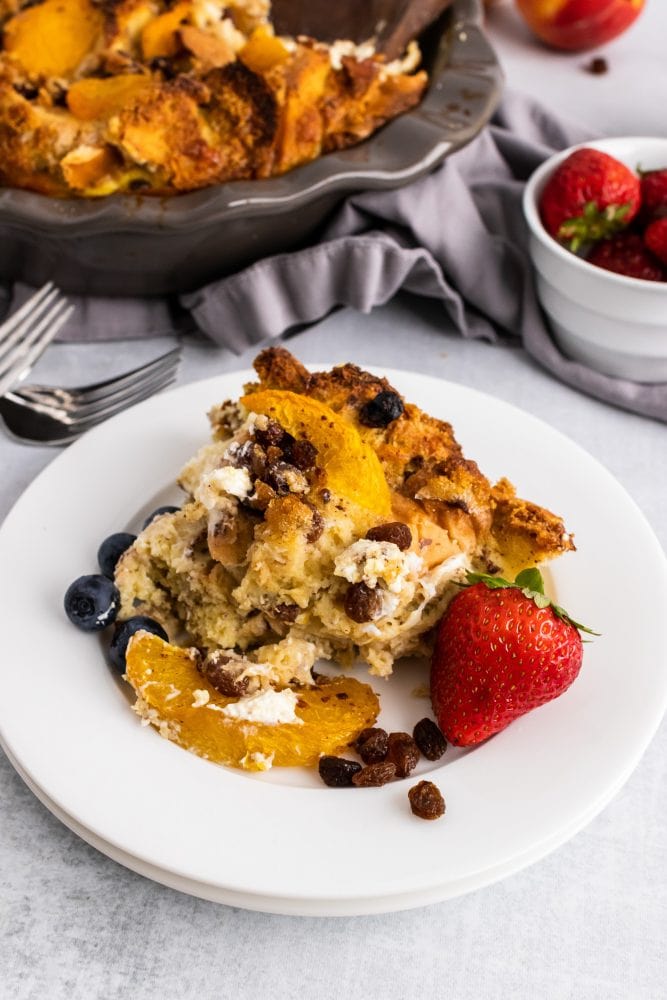 Add to that a bit of bourbon and peaches, and you’ve got a crowd pleaser. I’ve kept the innkeeping story below just for my own memories. But feel free to just click the button above to skip to the recipe. 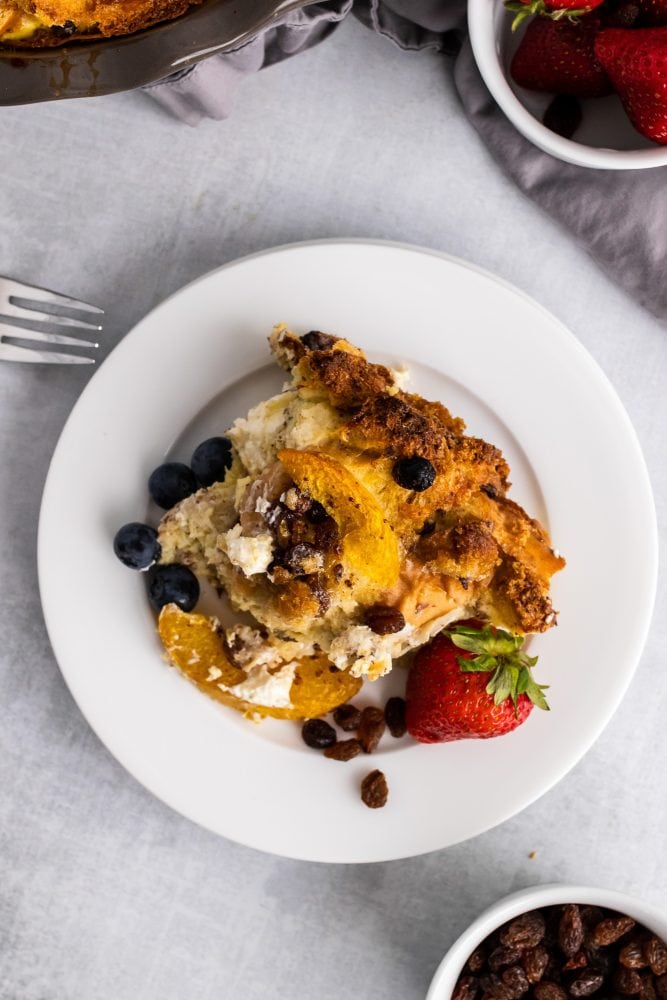 I guess I’ve gotten to the point now, after creating many a recipe (and screwing up a few dishes to boot) where I can take a peak in my fridge, throw together some ingredients and make something good. Of course, one can never go wrong with bourbon. It just sounds good.

This got me thinking about a southern accent. Does talking about bourbon and bread pudding sound more delicious with a southern drawl? Now, I live in the south. I say “y’all” a lot. But I don’t have much of an accent beyond that. However, I used to work with a girl from Alabama that could insult you seven different ways to Sunday. But her tone would have you tricked into thinking she just invited you to her house for coffee.

Out of sheer curiosity, I Googled “southern drawl” and this is what I found on Wiki. They actually label it “Southern American English” or SAE.  It’s characterized by dropping the R at the end of words and instead using the circumfix -in’. They also describe gliding vowels as a diphthong. My thought was, “a what?  a dip-a-thong?” I’m just gonna leave that alone. But we’ll make today’s post fun by writing in an SAE accent. It will sound sweeter. And will probably make you hungry. Play along with me now y’all and read it aloud.

The weekend of the Kentucky Derby, some friends were makin mint juleps an had a gigantic bottle of whiskey on hand. It was so enormous, that, despite the fact there were at least 10 people at their derby party coolin’ off with a mighty minty drink, I didn’t think they’d mind (or even notice!) if I stole their normal sized bottle of Jim Beam for some recipe experimentation.

So, here we go. Grab y’all some peaches, bourbon, eggs, and a big ole loaf a bread and let’s get started. 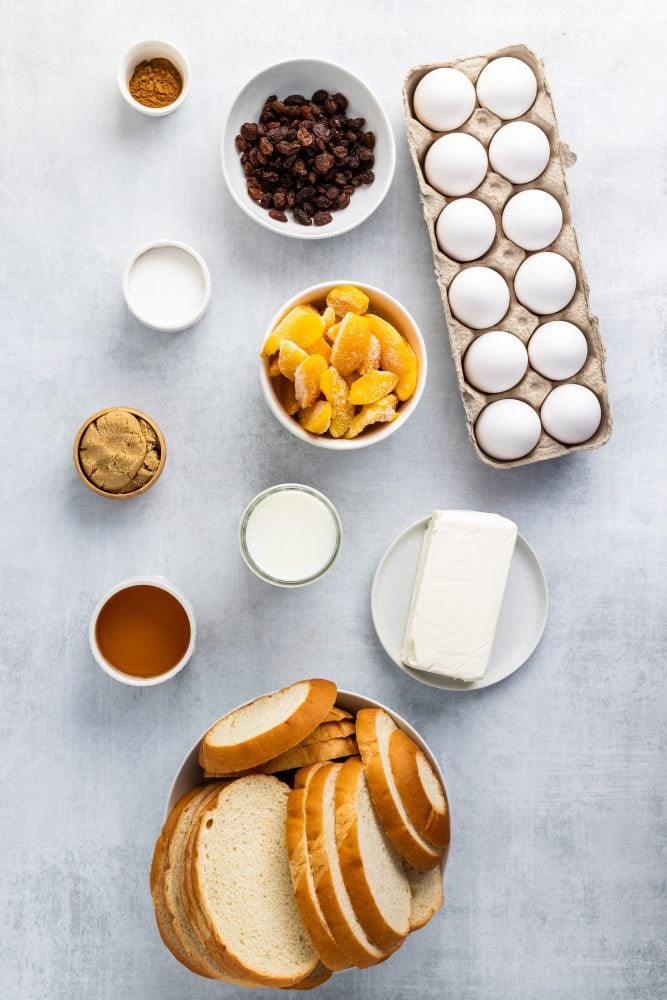 Start layerin the bread in a large bakin dish or pie pan. (This reminds me of my former boss and friend that would say “pah” instead of “pie.”  She said I pronounced it “pye” instead of the proper “pah.”  I do admit though, the way she said “pah” sounded like it had less calories and tasted better than pie. 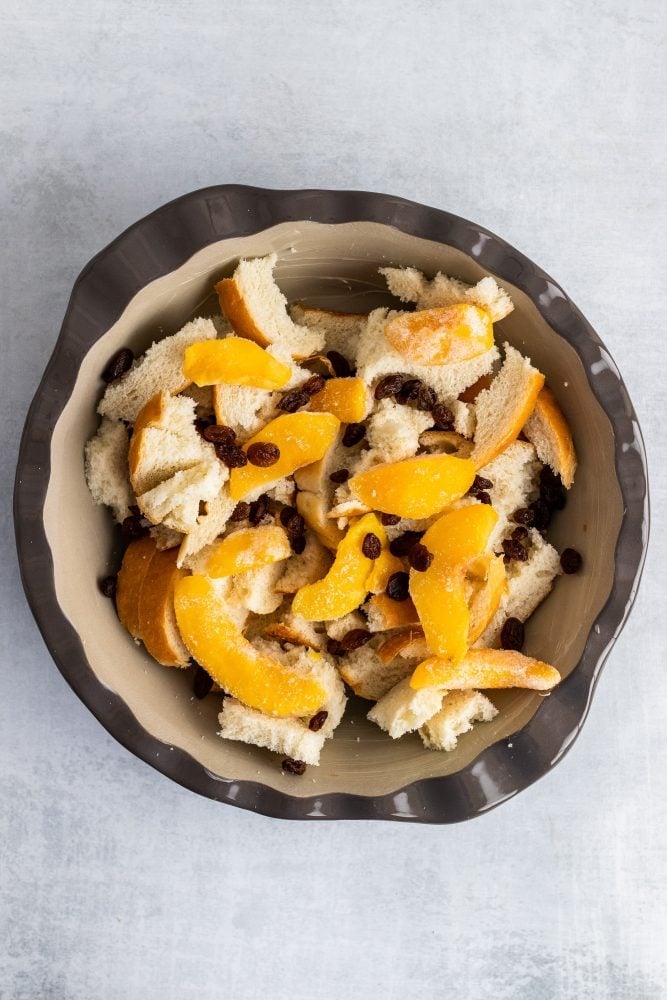 Now, you can omit the cream cheese. But I kinda like the way it makes the bourbon bread pudding creamy. 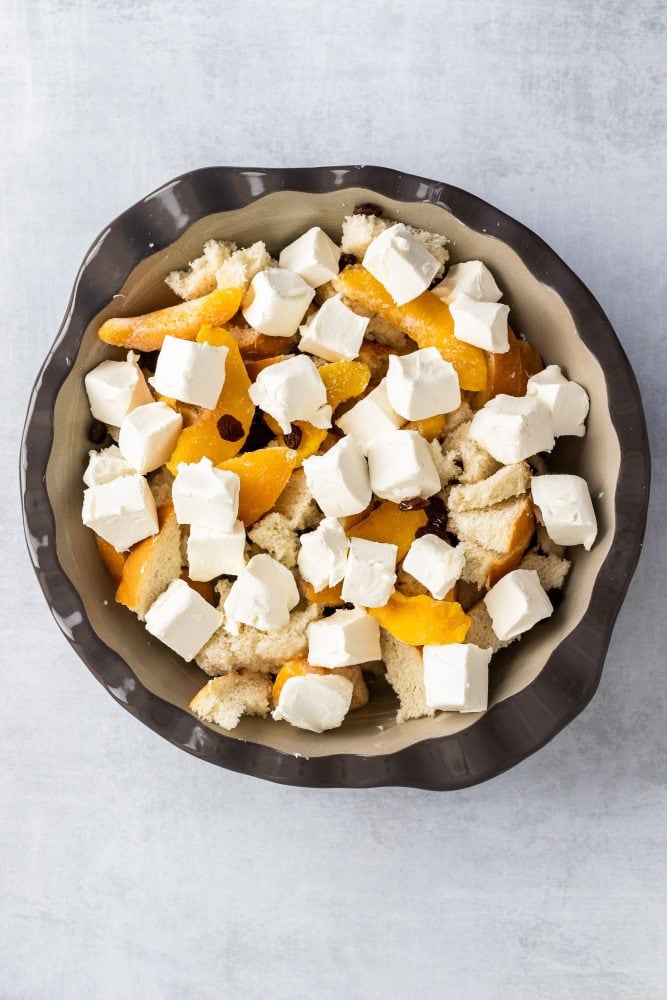 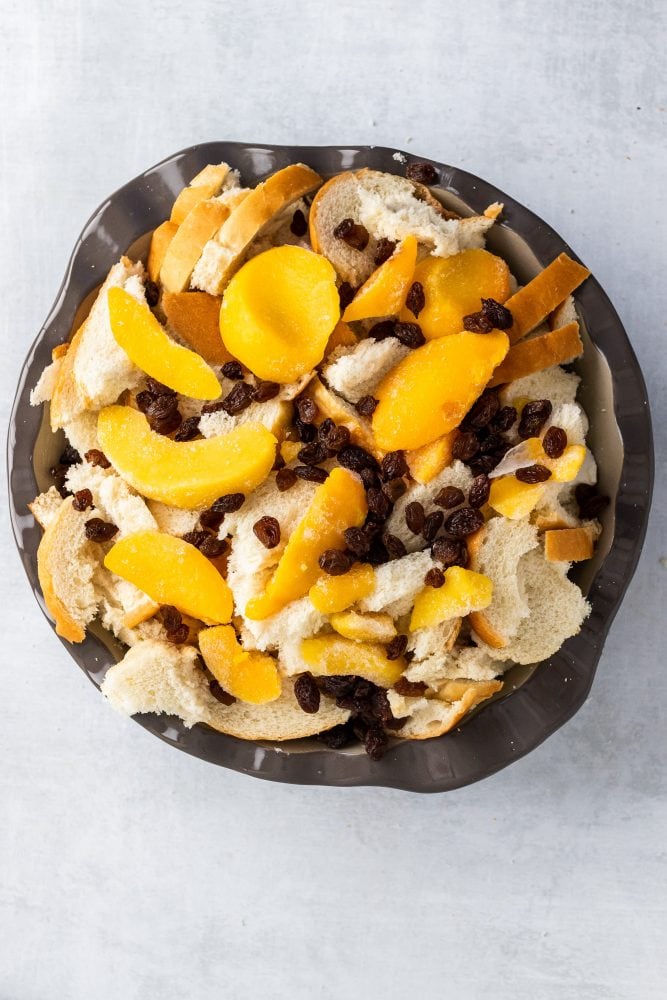 Then whip togethah about a dozen eggs, a cup of milk, a cap of vanilla, some sug-ah … (is this writing in a SAE accent tiresome? I hope not, I’m having fun.) 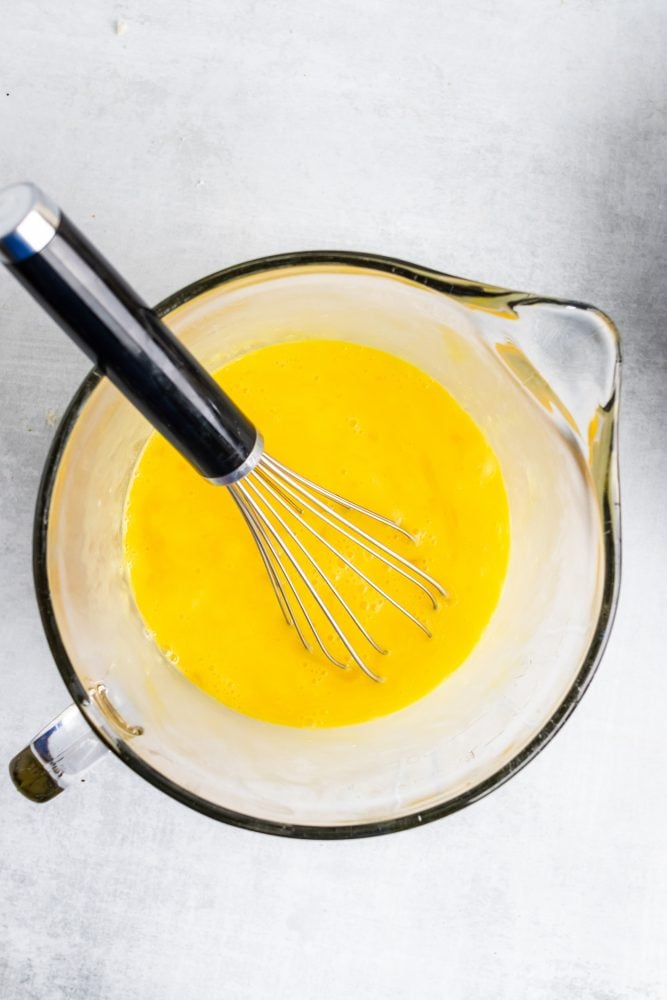 Add your spices and a splash of bourbon. Okay. Maybe a little more than a splash. 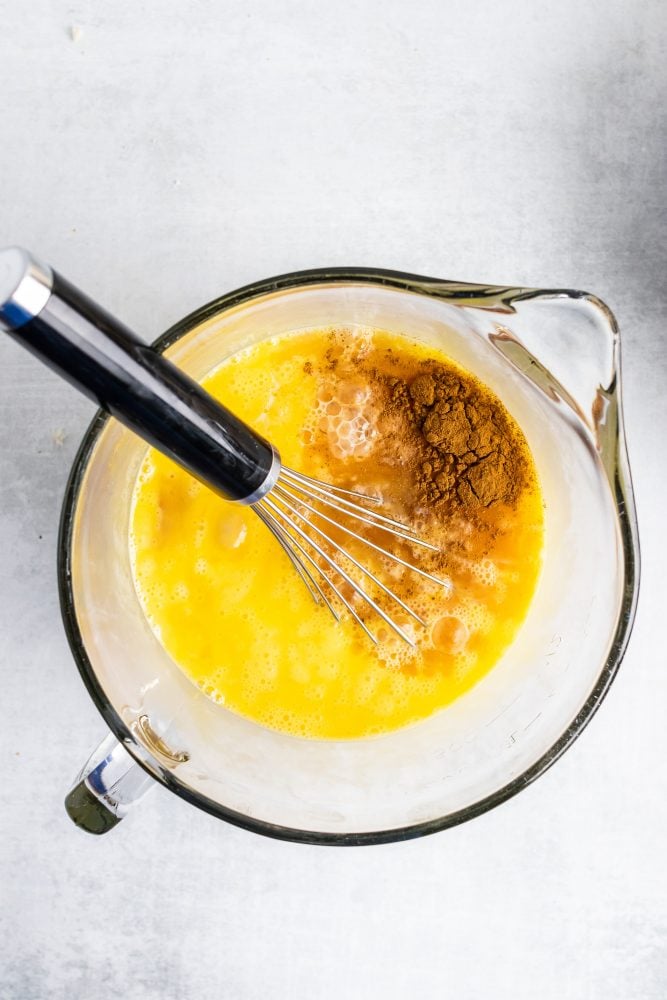 Pour the whisked whiskey egg-y mixture over the bread and make sure all the dry ingredients get good and soaked.  You can even make this ahead of time, cover it, and let it sit in the fridge to allow the bread to absorb every last drop of the egg-y mixture. 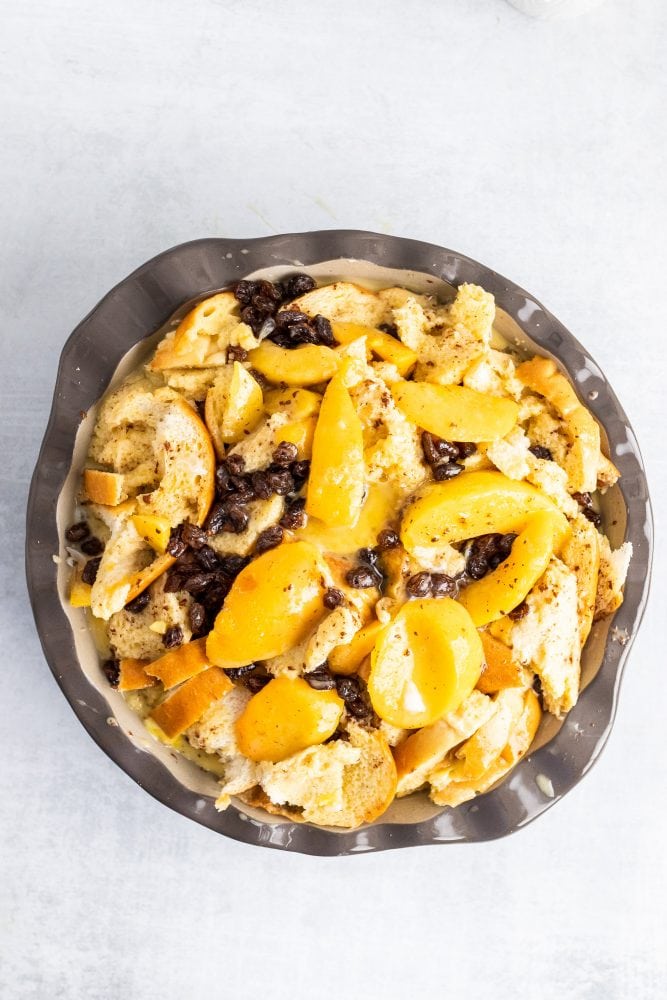 If you are pressed for time, press the bread down with your finger.  Sprinkle with some brown sugar. Oh, wait … I meant brown “shug-ah.” 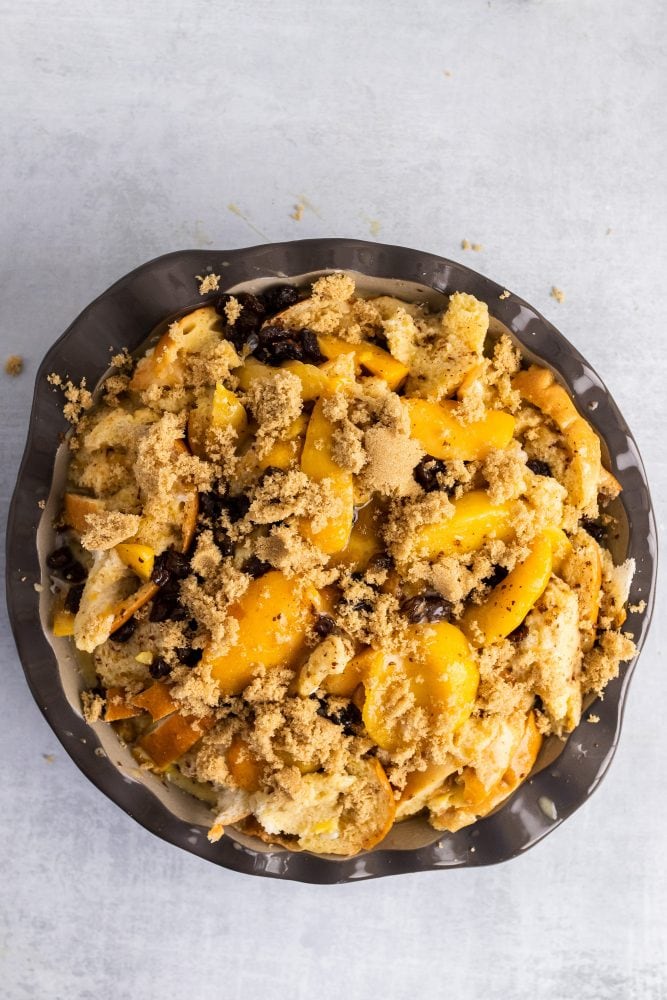 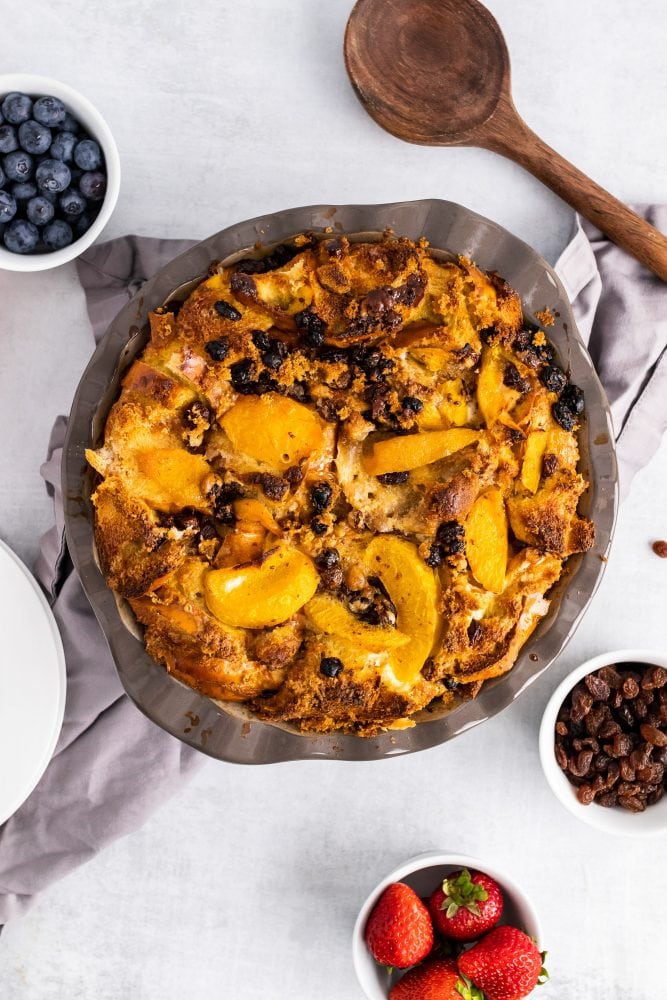 Several friends had texted, Facebooked and tweeted me about entering the cream cheese recipe contest, and this is one dish that could definitely get better with cream cheese!