I’ll never forget the time I introduced a couple of my girlfriends to my one of my favorite Italian desserts, an affogato. We walked into a little ice cream shop, and I read it on the menu board above the cashier and gasped, “They have affogatos!” To which they replied, “an affo-what?” Knowing that they both loved coffee, I knew they were in for a treat. Read on to find out more about affogatos and its history, or just scroll down to the recipe to learn how to make one at home. 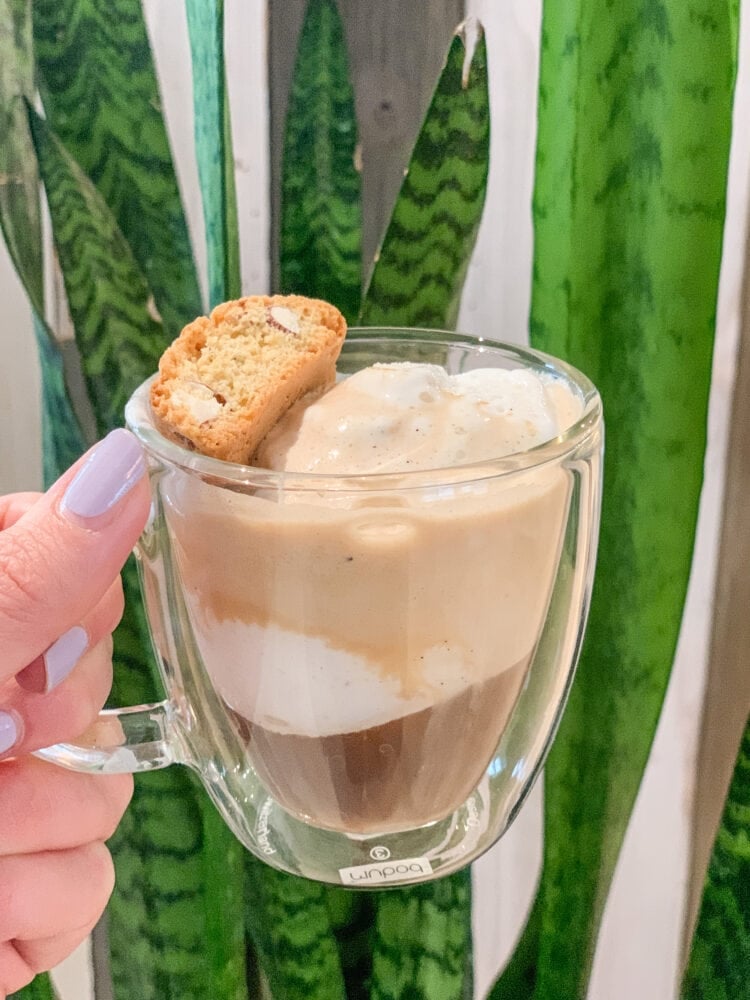 WHAT IS AN AFFOGATO?

Some affogato recipes also include a shot of liqueur such as amaretto. Which would make it the perfect after-dinner sweet! We love having them after lunch when we need a pick-me-up to finish the work day. Afternoon affogatos have definitely become a regular at our home office. 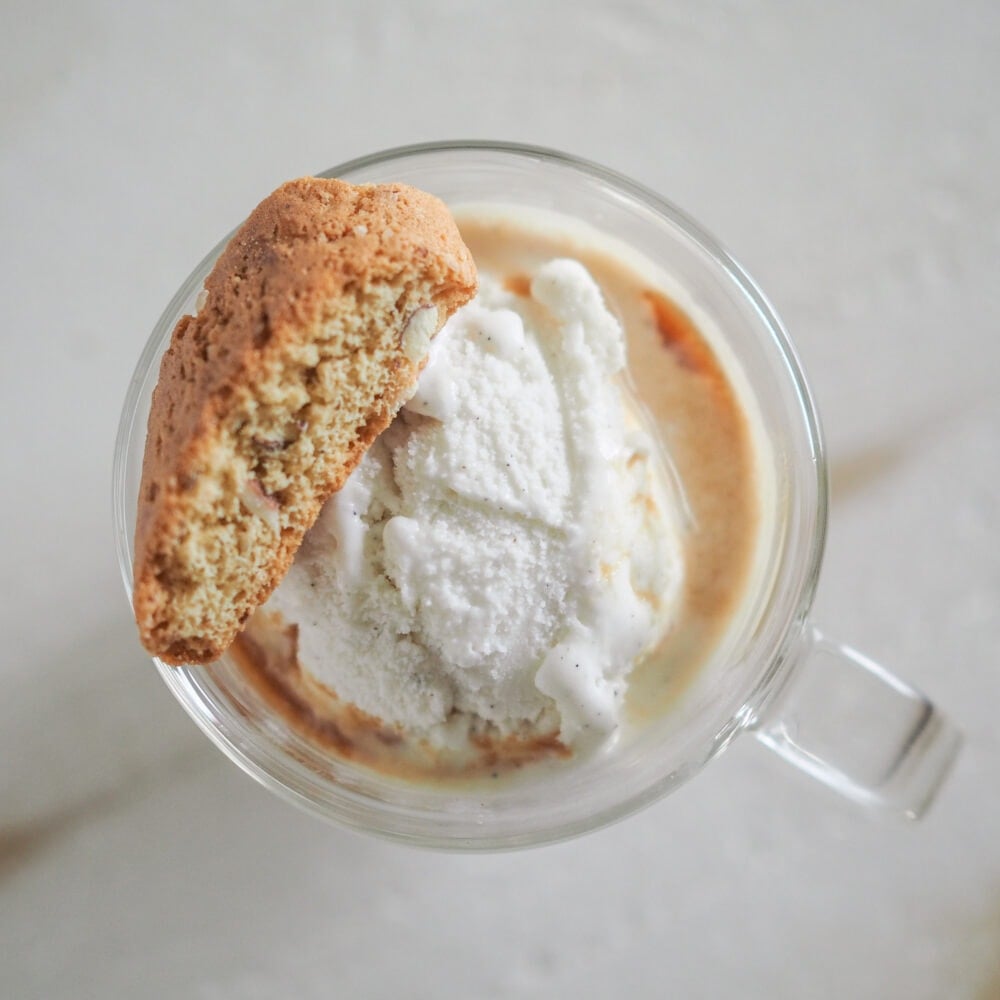 DOES AN AFFOGATO HAVE ALCOHOL?

Typically, a basic affogato recipe is just espresso and ice cream. But some affogatos are served with alcohol too! If you’re making them at home, add a half shot of your favorite liqueur. Some of my favorite Italian liqueur flavors to pair with coffee are nut-flavored, such as the almond-flavored Amaretto or the hazelnut-flavored Frangelico. But Kahlúa, Baileys, and Amarula compliment espresso nicely too! The orange-flavored Grand Marnier is also nice with a chocolate or vanilla affogato. 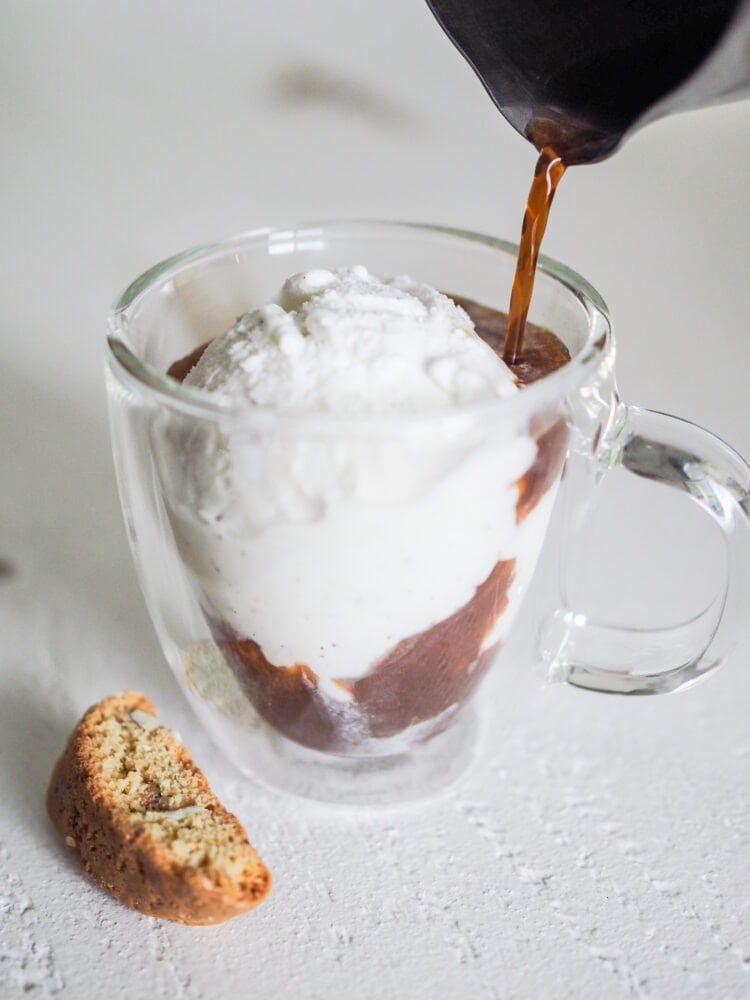 IS IT HOT OR COLD?

Here’s the beauty of affogatos. They’re both hot and cold. It’s simply ice cream topped with coffee, creating a tasty combination of different textures and temperatures as it melts into a creamy cool coffee drink to sip once the ice cream has melted. Usually, the espresso is allowed to cool just a bit before pouring it over the gelato. I also like to pour it just around the outside of the gelato scoop, creating a sort of gelato island floating in coffee. If you pour the espresso over the ice cream or gelato while it is too hot, you’ll just end up with a creamy iced coffee.

HOW DO YOU EAT AN AFFOGATO

Sip or spoon, it’s up to you how you’d like to eat an affogato. Typically, it’s served in a small cup with a spoon. Sometimes there will be a little extra treat such as a small biscotti or cookie. Personally, I’ll eat the ice cream and then sip the creamy coffee combo that’s left over. But dipping a biscotti or cookie into the creamy espresso left at the bottom of the cup is heavenly. Sometimes restaurants or cafes will add a little whipped cream, but I don’t think that’s necessary. The ice cream drowned in espresso is delicious enough.

SHOULD I USE GELATO OR ICE CREAM?

This is a great debate. Since it’s an Italian dessert, I should say gelato. But, personally, I prefer ice cream since it doesn’t melt as quick. You could use either ice cream or gelato, really. 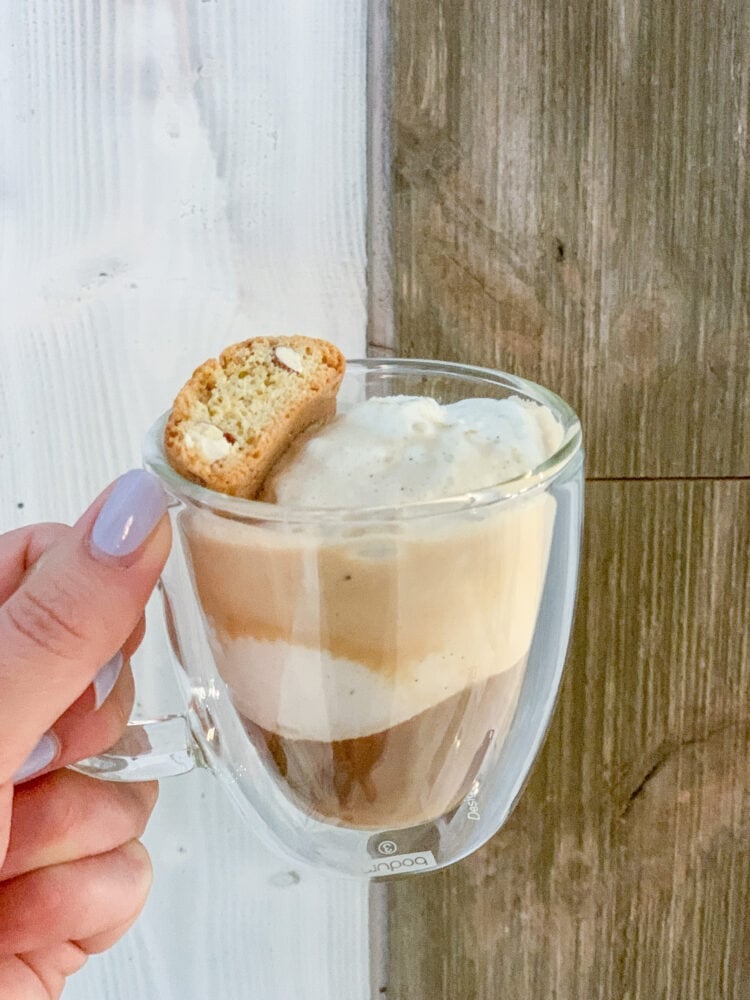 WHEN WAS THE AFFOGATO INVENTED?

While gelato dates back to 16th century, some say in Florence by Bernardo Buontalenti to impress Catherine Medici. Coffee has an even longer history, beginning in the 15th century in Yemen. Then, Angelo Moriondo patented the first espresso machine in Italy in 1884. But as for who first married the two together, gelato and espresso, it seems no one knows! According to Merriam Webster Dictionary, the word affogato was first used to describe a dessert in 1992. So it must be fairly recent! Whoever it was should be sainted. 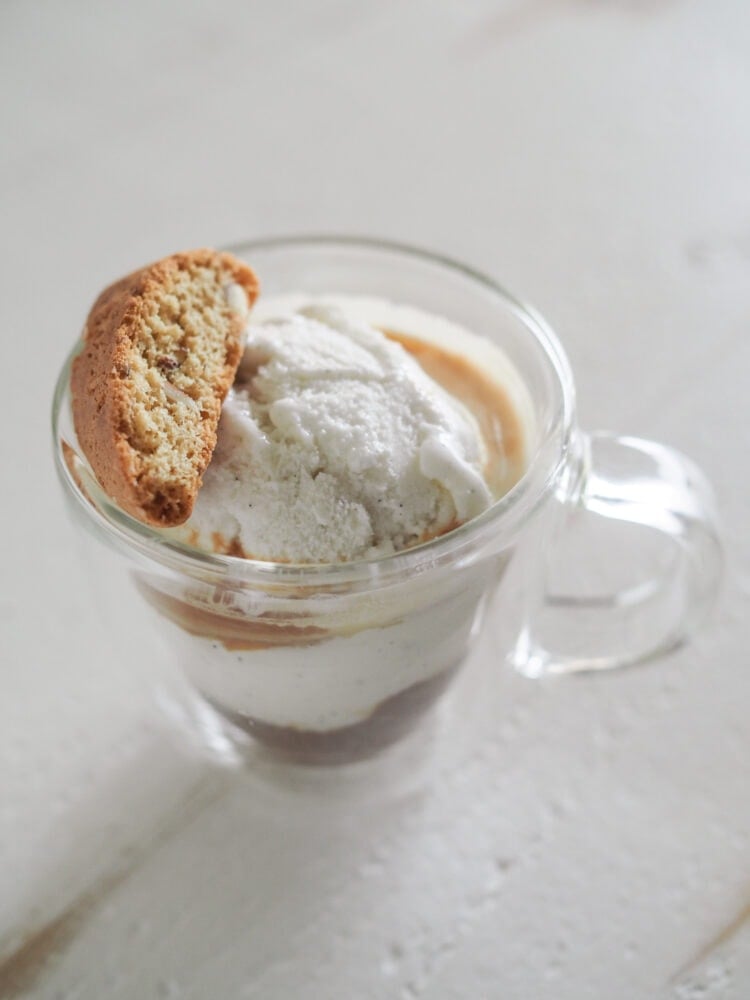 HOW TO MAKE AN AFFOGATO

To make an affogato, you need only two ingredients: espresso and ice cream. At home, you don’t need a fancy espresso maker (although, they are really nice). A simple moka pot will make a single shot of espresso and it’s what we used while spending summers in Italy.

As for serving, small clear glass cups or mugs are best. Simply add one scoop of ice cream or gelato to each mug, and pour one shot of espresso along side the ice cream. That’s it! That’s how easy it is to make an affogato.

So, what if you don’t have an espresso machine or moka pot? You can use coffee too. Just brew it a little stronger than you normally would, and use about one third to a half cup of coffee per affogato.

I have a printable below if you’d like to add this to your recipe box at home. But here are quick and easy instructions for how to make an affogato:

Brew a fresh espresso in an Italian moka pot or an espresso machine. You’ll want to make an espresso for each affogato serving.

Add one scoop of ice cream or gelato to each serving cup. I like to use clear glass insulated espresso cups.

Let the espresso cool for a minute or two, then slowly pour espresso down side of cup until cup is full. Pouring down the inside of the cup rather than on top of the ice cream helps keep the ice cream cold and not turn this into a creamy cold coffee.

Brew espresso in a moka pot or espresso machine.

Add one scoop of ice cream to each serving cup.

Slowly pour espresso down side of cup until cup is full.

So, what if you don't have an espresso machine or moka pot? You can use coffee too. Brew it a little stronger than you normally would, and use about one third to a half cup of coffee per affogato.

HERE ARE MORE RECIPES AND STORIES WE THINK YOU’LL ENJOY!