One of my favorite things to do when traveling is visiting the local grocery stores for a little cultural immersion and to purchase some unique souvenirs. Sometimes my favorite treats aren’t always items you can take back home with you on a plane, such as exotic fruit. 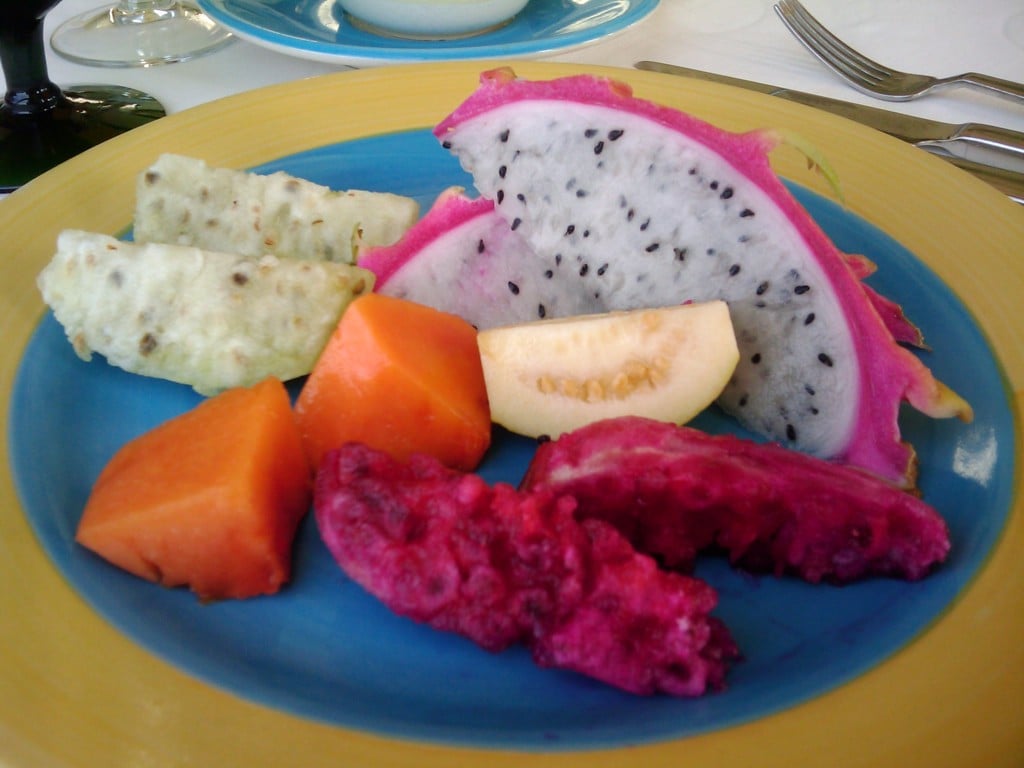 While traveling to Mexico, Costa Rica and Belize, I had the opportunity to taste some delicious sweet fruits. If you find yourself traveling in Central America, these five are definitely worth a try.

Dragon Fruit – This one not only tastes refreshing, it just looks fun!  I’m sure its colors and patterns have inspired a few artists or fashionistas. The skin is a bright fuchsia that contrasts well with the milky white fruit you’ll find inside. Freckled with little black seeds, it reminds me of kiwi fruit in looks as well as flavor and texture.

Cactus Pear – When this was first served to me on a plate in Mexico, I thought it was just a great big glob of hot pink ice on my plate.  It was actually a mild and refreshing, yet flamboyantly colored fruit. When I returned home to the States, I found some cactus pear at my local grocer and was excited to try it at home.  Only, I made the mistake of chopping it like an apple and biting into a slice.  Well, it should be called “prickly” cactus pear as there are tiny little barbs on the skin.  So definitely remove the exterior peel before eating.

Guanabana – This citrus flavored fruit is likely to get a catchy tune stuck in your head.  The pronunciation of this fruit sounds a lot like the Muppets song, Mahna Mahna. It’s a popular ingredient for beverages, and you’ll often hear people singing a variation of the song to order a drink with guanabana in local bars.

Mamón Chino – Imagine the head of an anime character with a bright magenta funky wild hairdo, and that’s exactly my opinion of what this fruit resembles. It’s like a cross between a dragon fruit and lychee. Once you peel back the bizarre exterior you’ll find a soft sweet fruit wrapped around a big seed.  In Asia it’s known as rambutan.

Guaba – The first time I tasted guaba was while hiking to a waterfall in Costa Rica. I kept misinterpreting our guide and thought she was saying, “guava.”  But it is indeed guaba.  It’s like a long pea pod with sweet fuzzy vanilla flavored beans tucked inside. It’s a rare treat.

What fun fruits have you tried when traveling? Comment and let us know below!