What Yoga Is Like In India – The Travel Bite

Get my free travel planning guide full of helpful travel tips and packing lists.
You are here: Home / Travel & Food Blog / What Yoga Is Like In India

Sometimes we search to find the peace within, and instead find it inside a bit of humor. Such was my lesson in learning what yoga was like in India.

While I was visiting Mumbai on assignment for the Four Seasons Private Jet Experience, I had the opportunity to take a yoga class.  Since we were mid-way through a 22 day trip, my muscles and back were aching for some yoga and stretching. Only, of all time times I didn’t pack any yoga pants, it was now. I told the concierge at the Four Seasons Mumbai that I needed to find some yoga clothes and asked where I might be able to get some. (Didn’t see any Gap stores or Lulu Lemon during my walking tour, that’s for sure.) But this is India! Surely there’s some yoga clothes at a shop nearby. The concierge said don’t worry, asked my sizes, and said that she’d take care of it for me. This is what I found in my room … 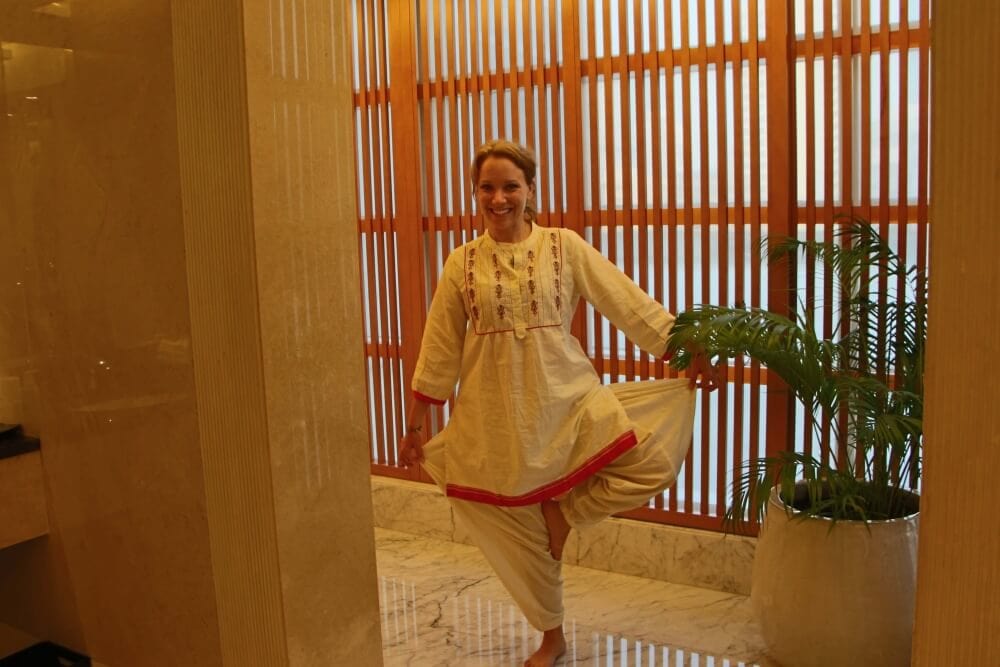 Now I look like a guru. How am I to explain my lack of flexibility and inner peace while wearing this? At least it’s comfy. Though, I do feel a little like MC Hammer.

When it’s finally time for my class, I was running late. The irony of rushing into something that should be peaceful isn’t lost on me. But I’ve learned in India that you can always blame tardiness on the traffic, and sure enough, my excuse garnered a laugh or two in the lobby. After checking in and sipping a small cup of ginger lemon tea, I start to slowly feel the tension in my shoulders release.

Dev, the resident yogi, greeted me in the yoga studio and we quickly got started. Now, guess what he’s wearing. ADIDAS. Yup. A white t-shirt and blue Adidas pants. How American looking. And here I am with my I-Dream-Of-Jeanie costume. At least it’s authentic.

With my toes hugging the edge of my mat, we began with some familiar sun salutations and then moved on to other poses until my body had been stretched and pretzeled into feeling aligned and balanced.  “Breathe, Rachelle.” Dev said. Oops, I had been holding my breath. With a big exhale, I closed my eyes to relax in shavasana. Lying down on the floor with my eyes closed, I hear a distant voice say, “Now, shoulder stand.” I open up my left eye and squint up at Dev. “Huh? You’ve got to be kidding.”  No, Dev was quite serious. He did see that I checked “beginner” on the intro form where it asked for level experience, hadn’t he? Seeing my disbelief Dev let out a little giggle and said, “I’ll show you.” So, with my feet pointed to the ceiling and his gentle guidance (actually, I think he was holding me up by my calves) I actually did a shoulder stand. And for those 5 seconds that I held that position, I remembered to breathe while simultaneously forgetting about everything else in the world.

Check out some of my other adventures in India, including learning to wrap a sari, exploring Elephanta Island, and celebrating Diwali.

Disclosure: This trip was part of an exciting work assignment for Four Seasons Magazine where I was invited on the inaugural flight for the Around The World Four Seasons Private Jet Experience.

Want to save this story? Pin it! 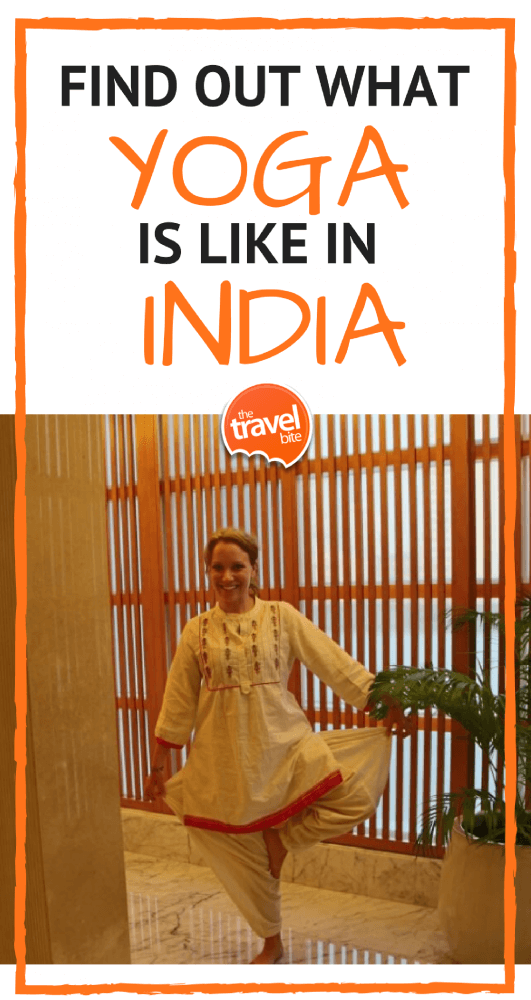 Previous Post: « How To Overcome A Fear Of Flying
Next Post: Alberta Cuisine: 5 Must-Try Foods In Alberta Canada »