While visiting Asia, Pete and I flew from Bangkok to Seoul, and then Seoul back to the United States on Korean Airlines.  And I’ve gotta say, they have some unexpected luxurious touches available in coach.  I’ve got photos of both of our flights below highlighting the amenities, entertainment, food, and extras that you’ll experience with Korean Air.

One of the other aspects of flying Korean Air that I really appreciated is that they have direct flights from Atlanta to Seoul.  Flying to Asia from the east coast of the United States usually involved a couple of connecting flights and is usually a 24 hour travel day.  This Atlanta connection cut our travel time in half and I can’t even tell you how great it feels to have only one more connection (instead of two or three) to get home to Florida.

Also take note, if you’re a Delta fan, Korean Air is part of the Skyteam, so you can collect skymiles with them too.  Perfect for planning for the winter olymics in 2018.  Nice to fly the official airline as it kind of sets you in the mood for the destination as soon as you get in the air. 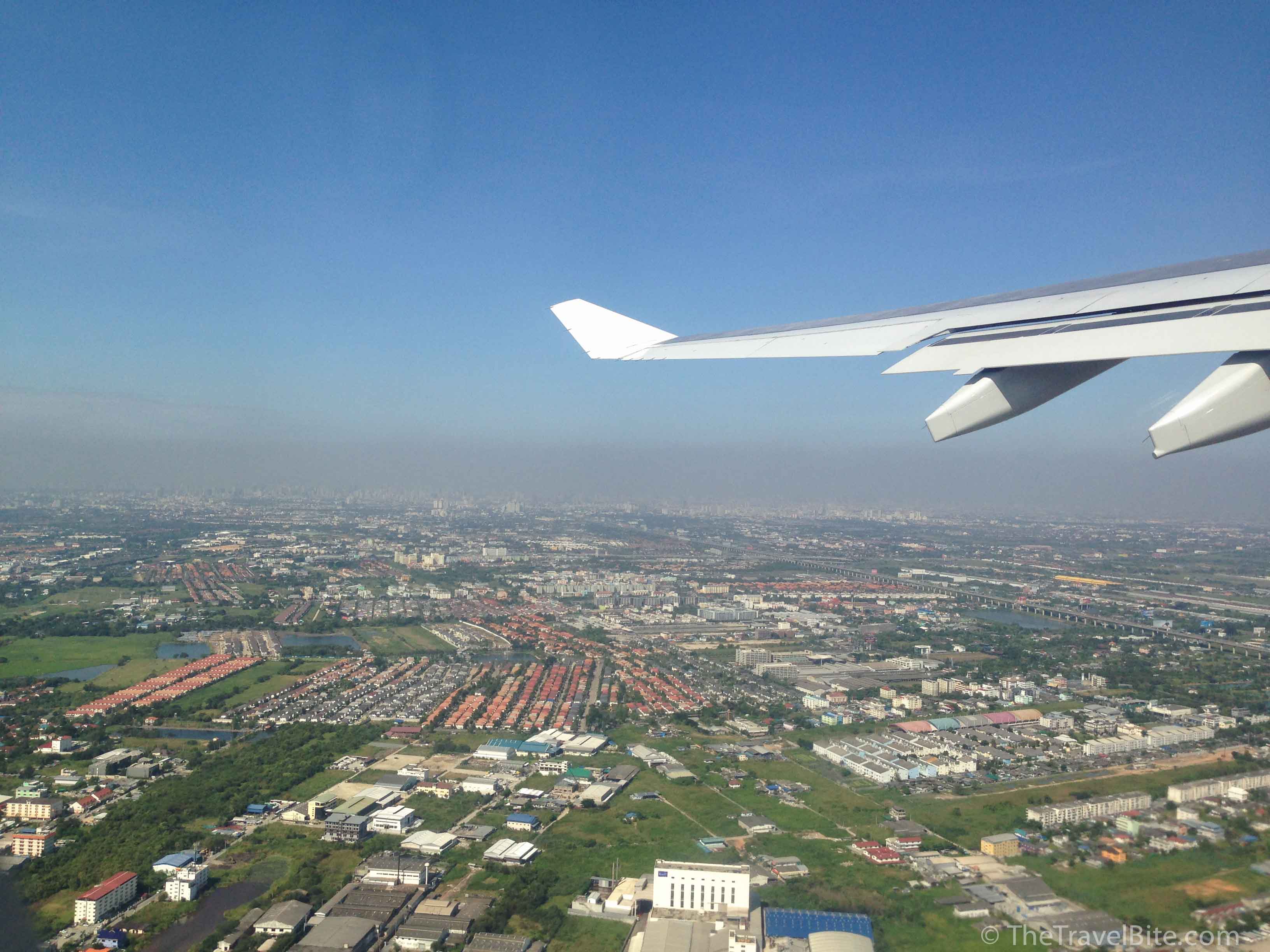 Plenty of leg room.  I’m about 5’3″ and there’s a lot of room between my knees and the seat in front of me. 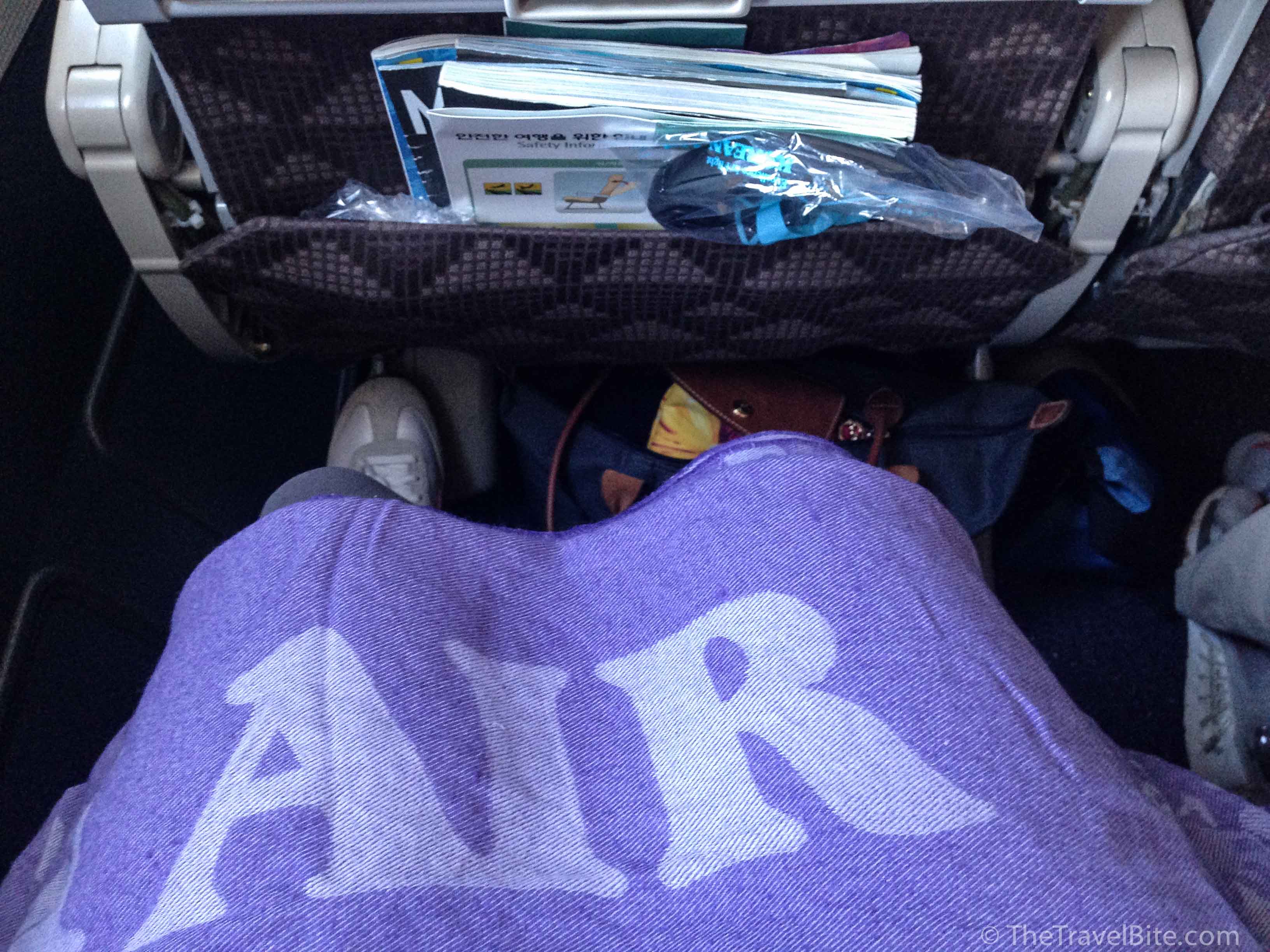 They have a pretty decent entertainment selection and a USB outlet for your phone. 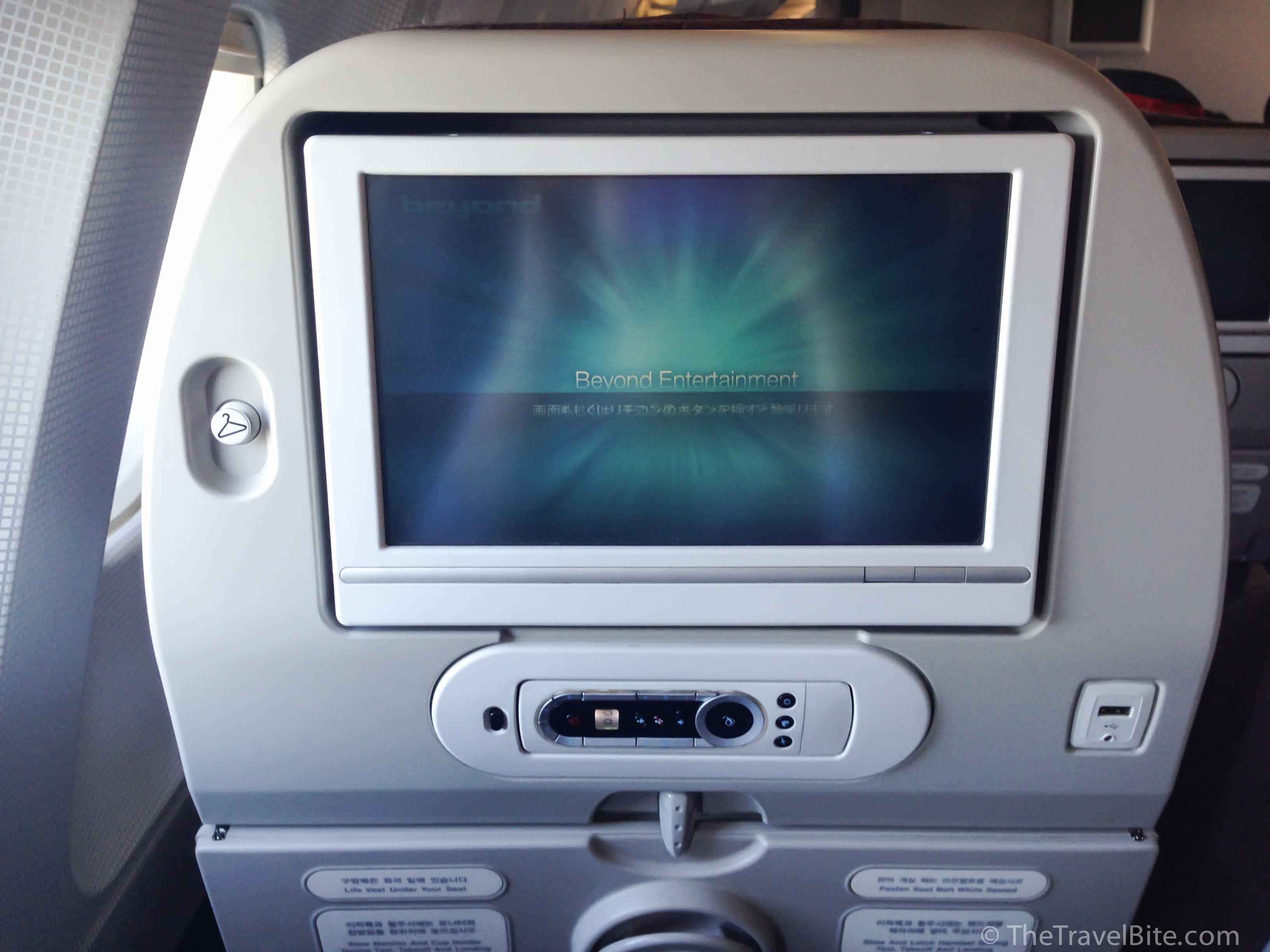 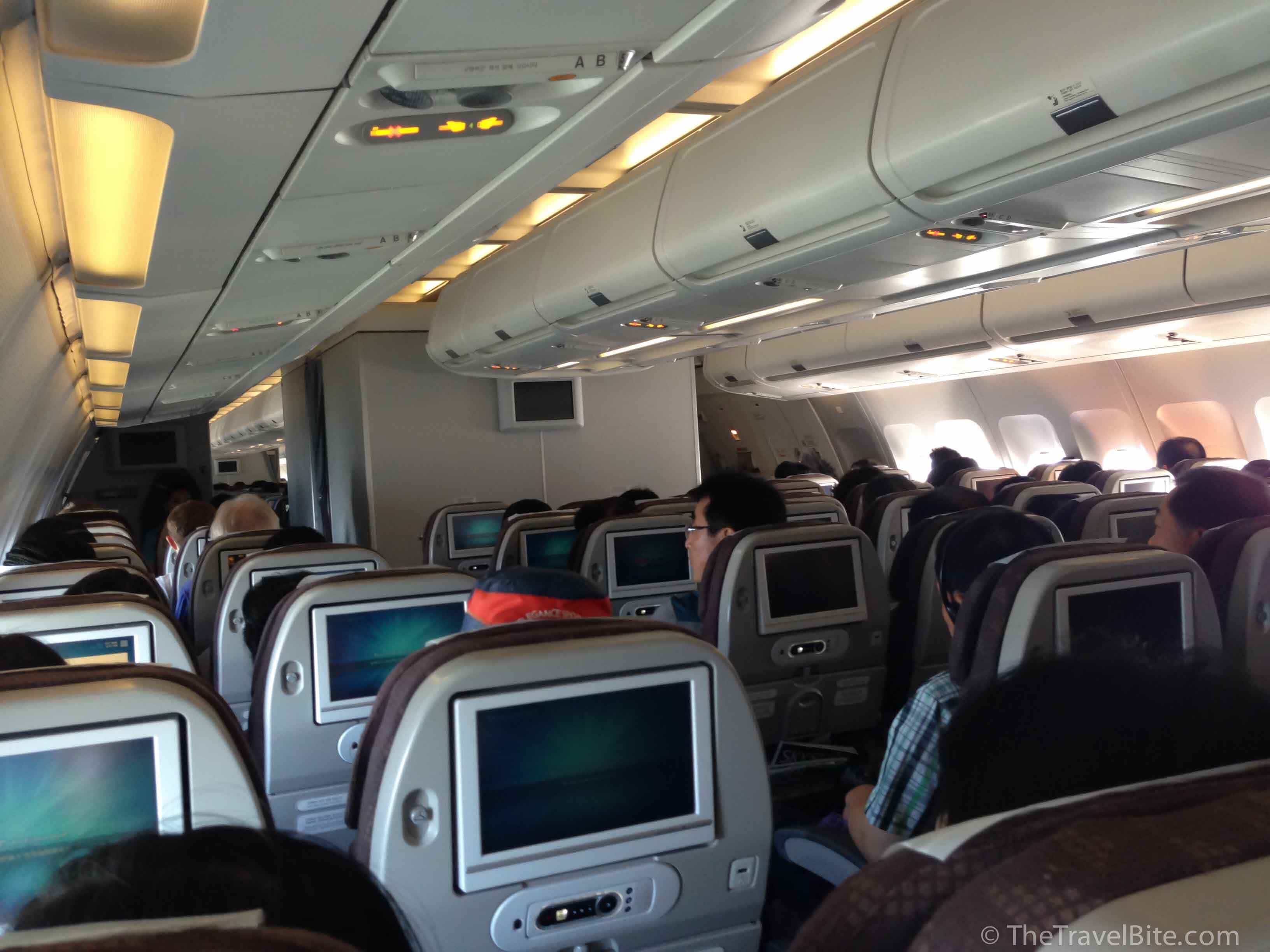 The food from Bangkok to Seoul included a salmon salad, beef and vegetables, and melon and dragon fruit for dessert.  I gotta tell ya, I love the option of having a light dessert for flights. 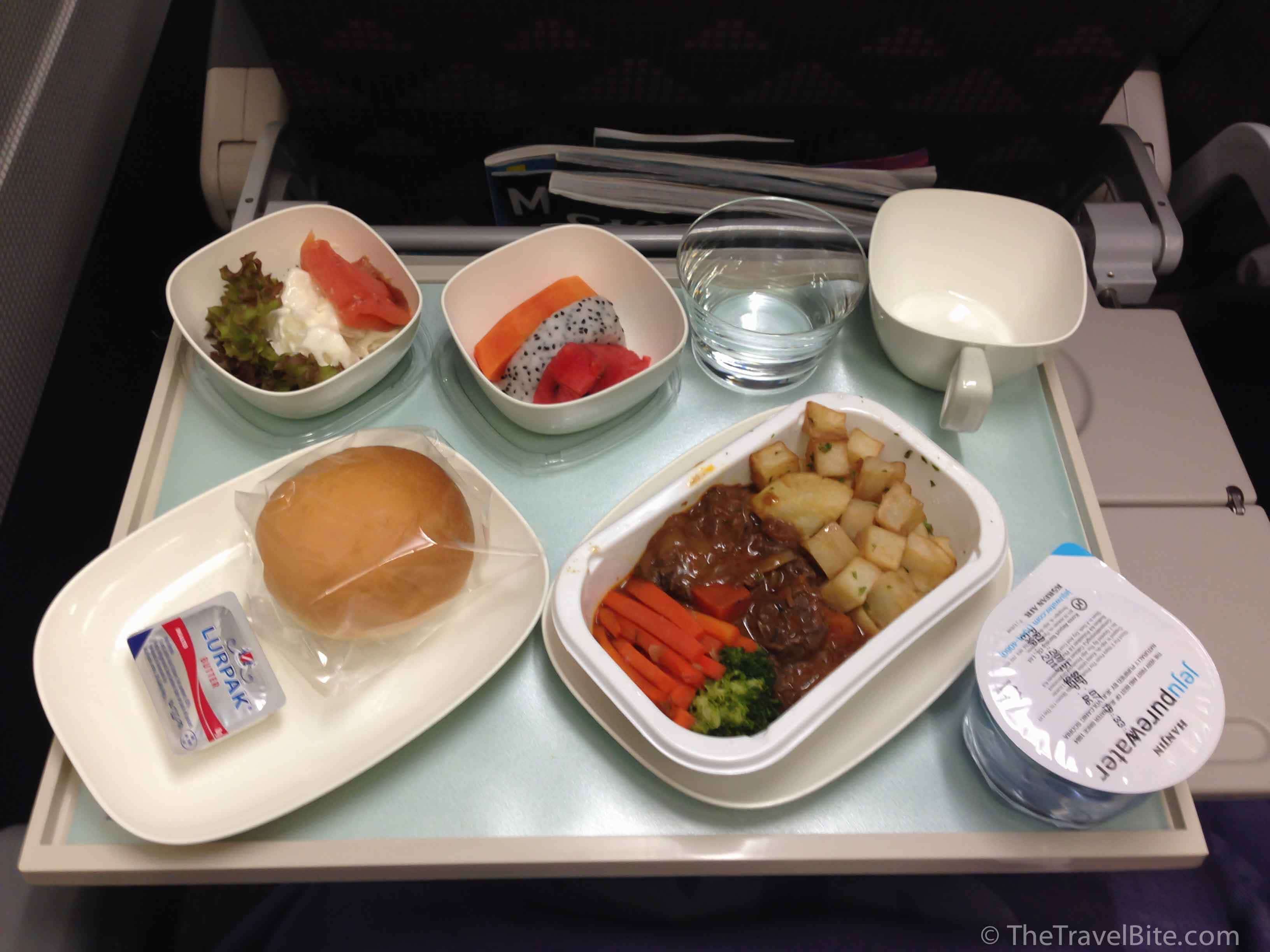 The bathrooms in coach were the most immaculate I’ve seen on any airline, plus they had Jurlique products available for refreshment.  I swear the airline stewards must watch the bathroom like a hawk because it was always clean and there was always a fresh dental kit available. 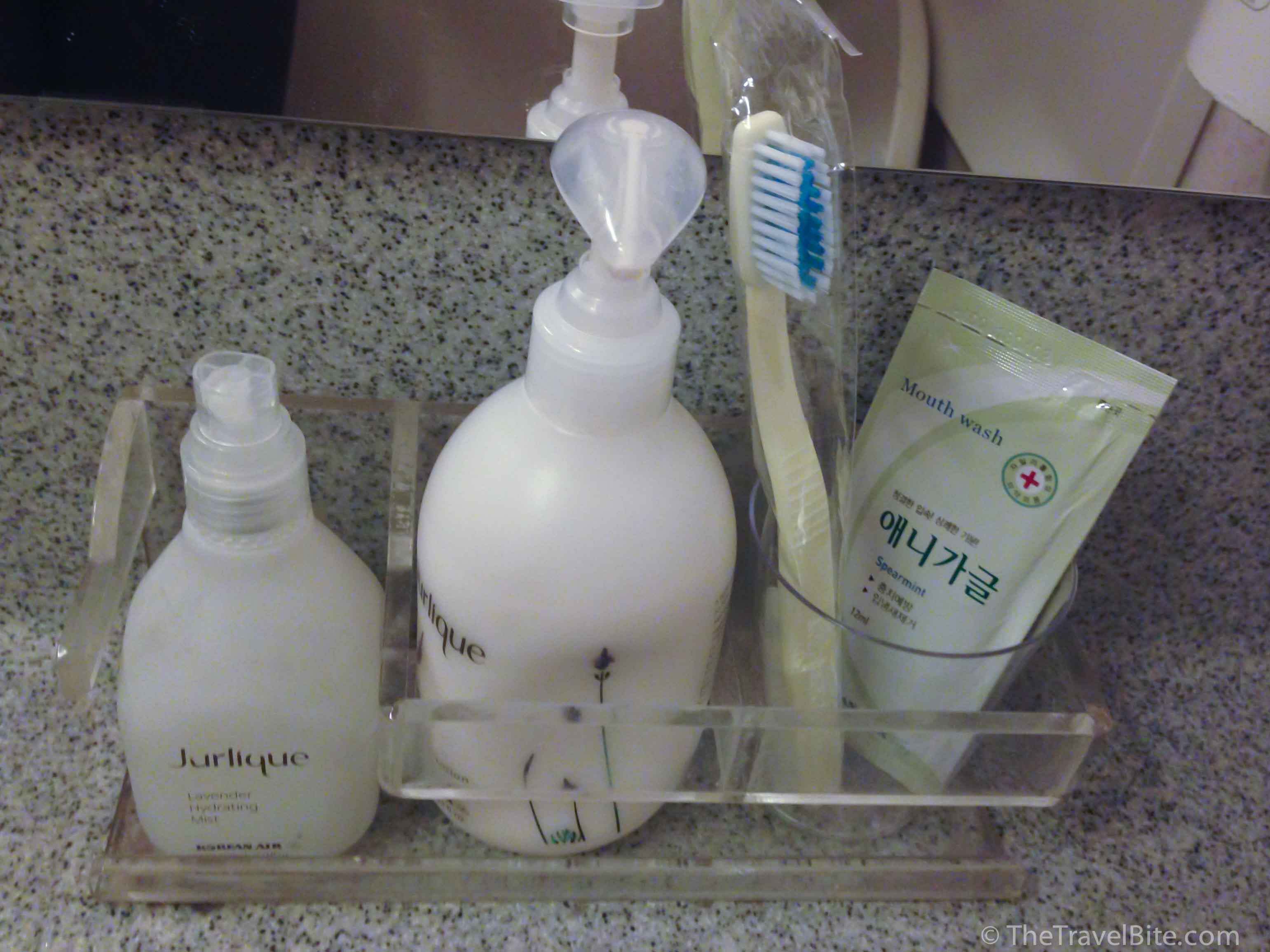 Landing at sunset in Seoul.  Isn’t it beautiful!  If you’re flying this route, be sure to request seats on the left side of the plane to catch this view. 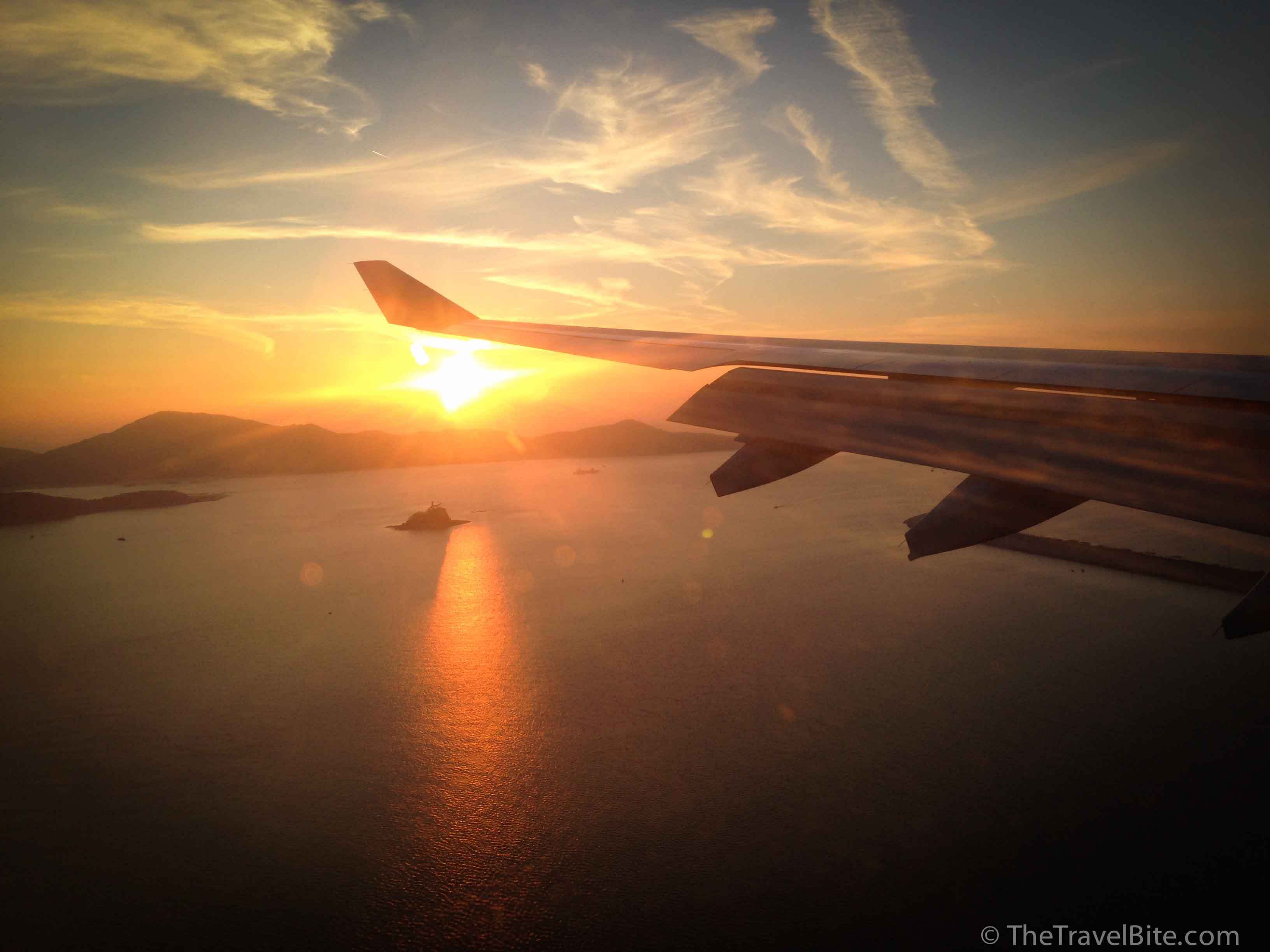 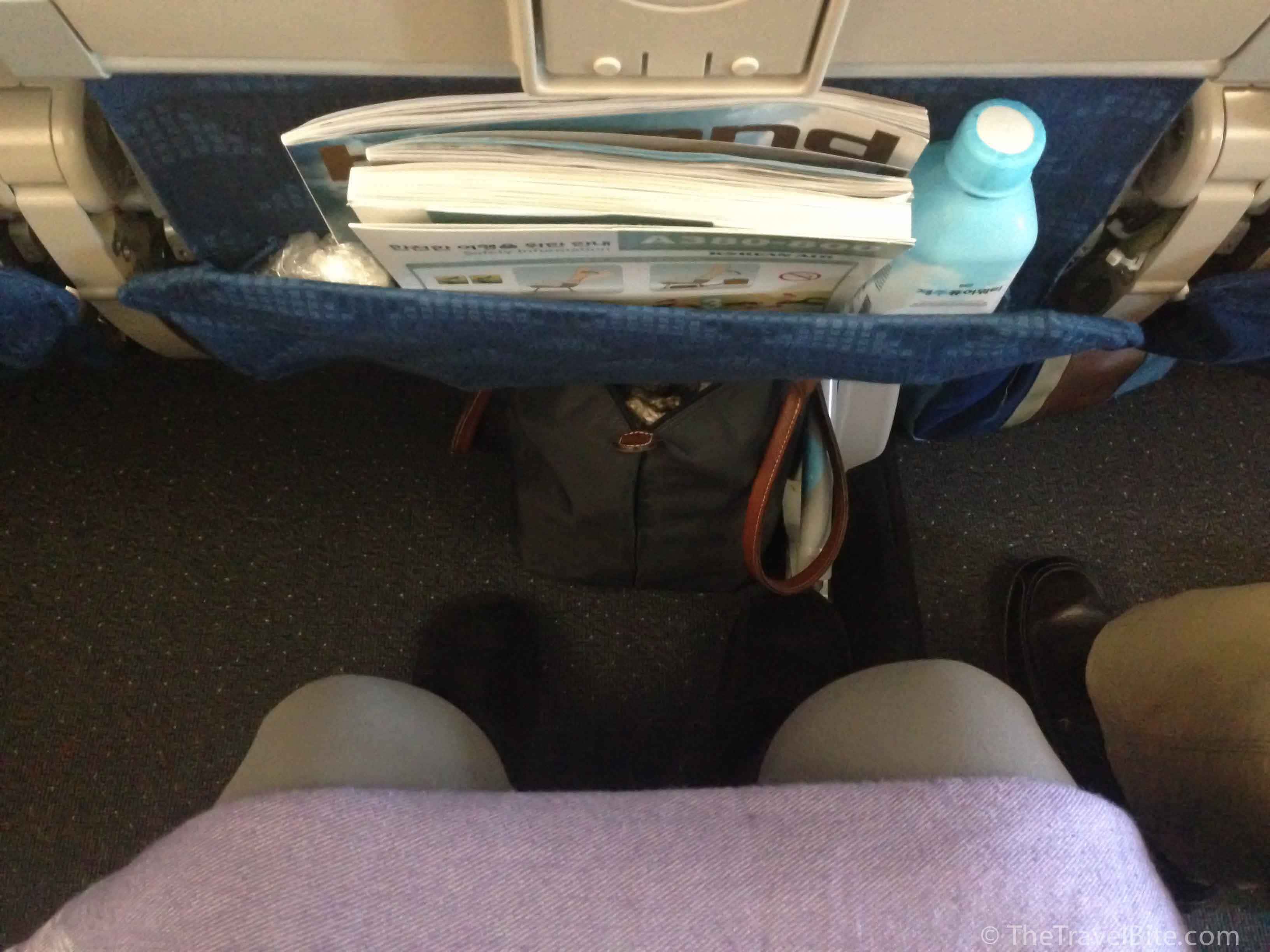 Again, there was ample leg room.  The plane itself seemed to be a bit older than the last one we flew, but still clean.  Because it was a longer flight, they had bottles of water in the seat when we boarded and they also had bottled water available throughout the flight to stay hydrated.  A nice touch, and not available on every international flight. 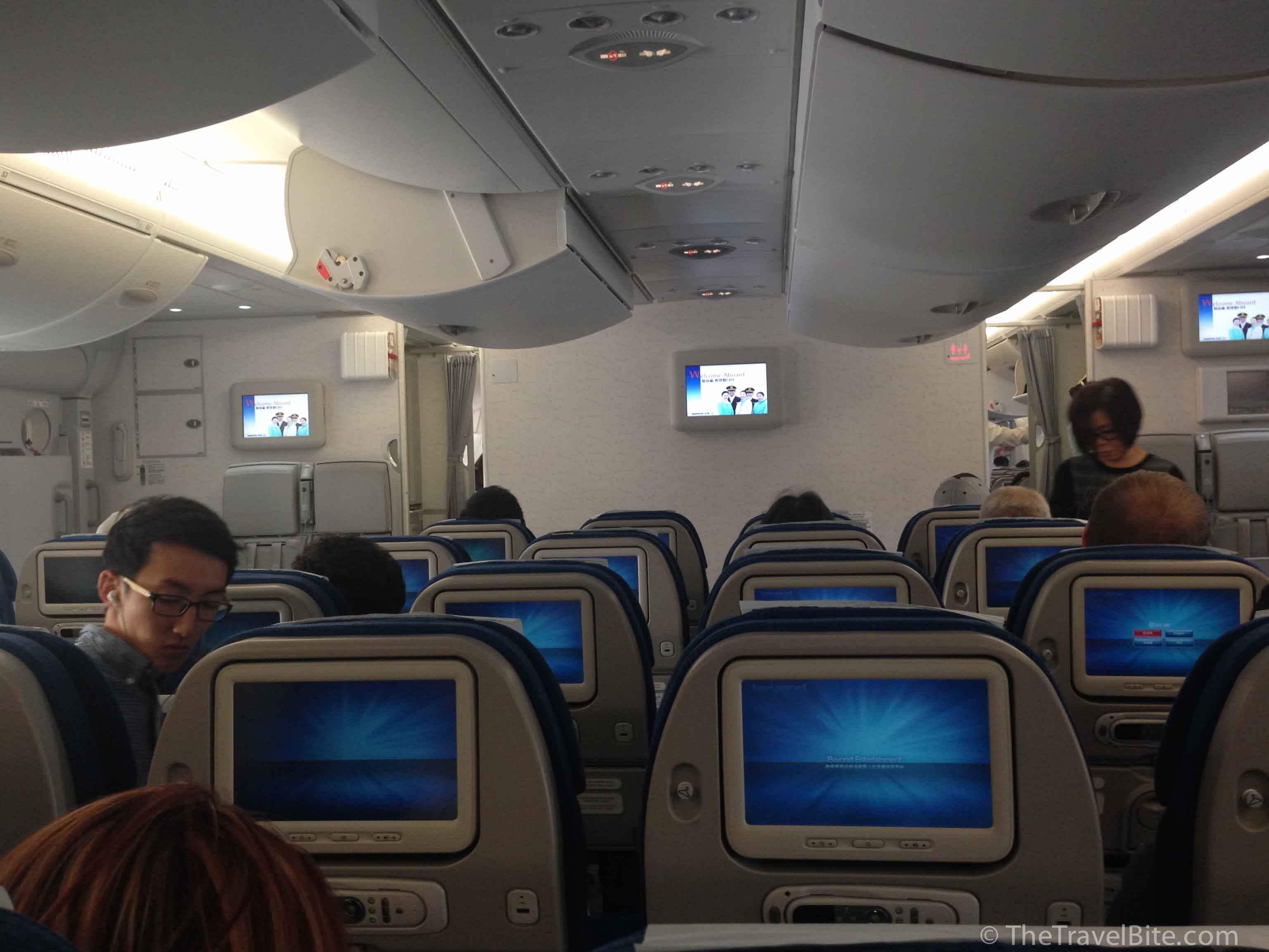 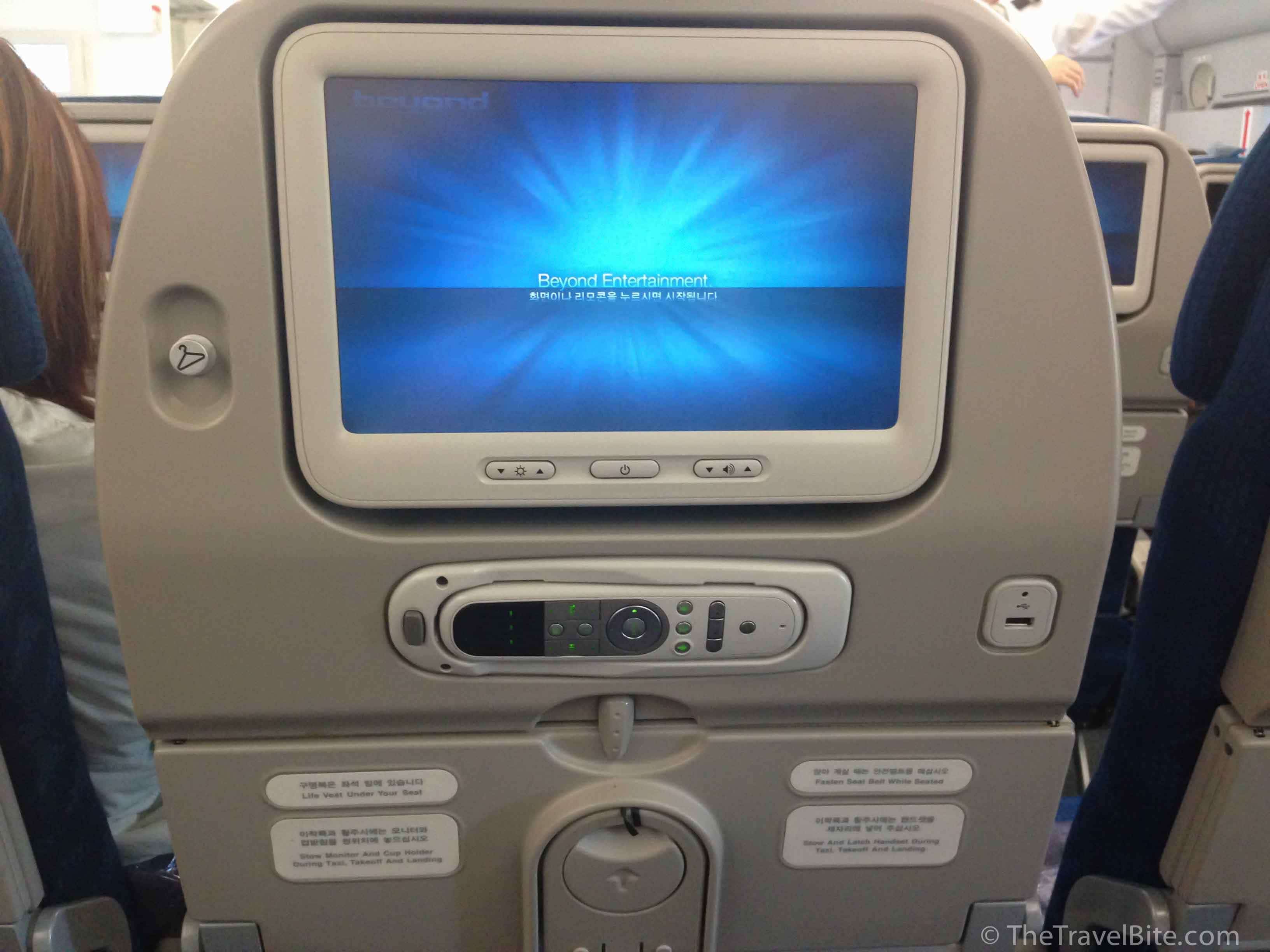 This is the amenity kit for the flight from Seoul to Atlanta.  It included a pair of slippers and a dental kit.  The bag was kind of flimsy and cheaply made.  I wish the bag was a bit nicer as it would be a great souvenir for the 2018 Olympic Games.  I travel so frequently that I tend to save these bags for storing electronics.  This one fell apart, so it wasn’t worth saving. 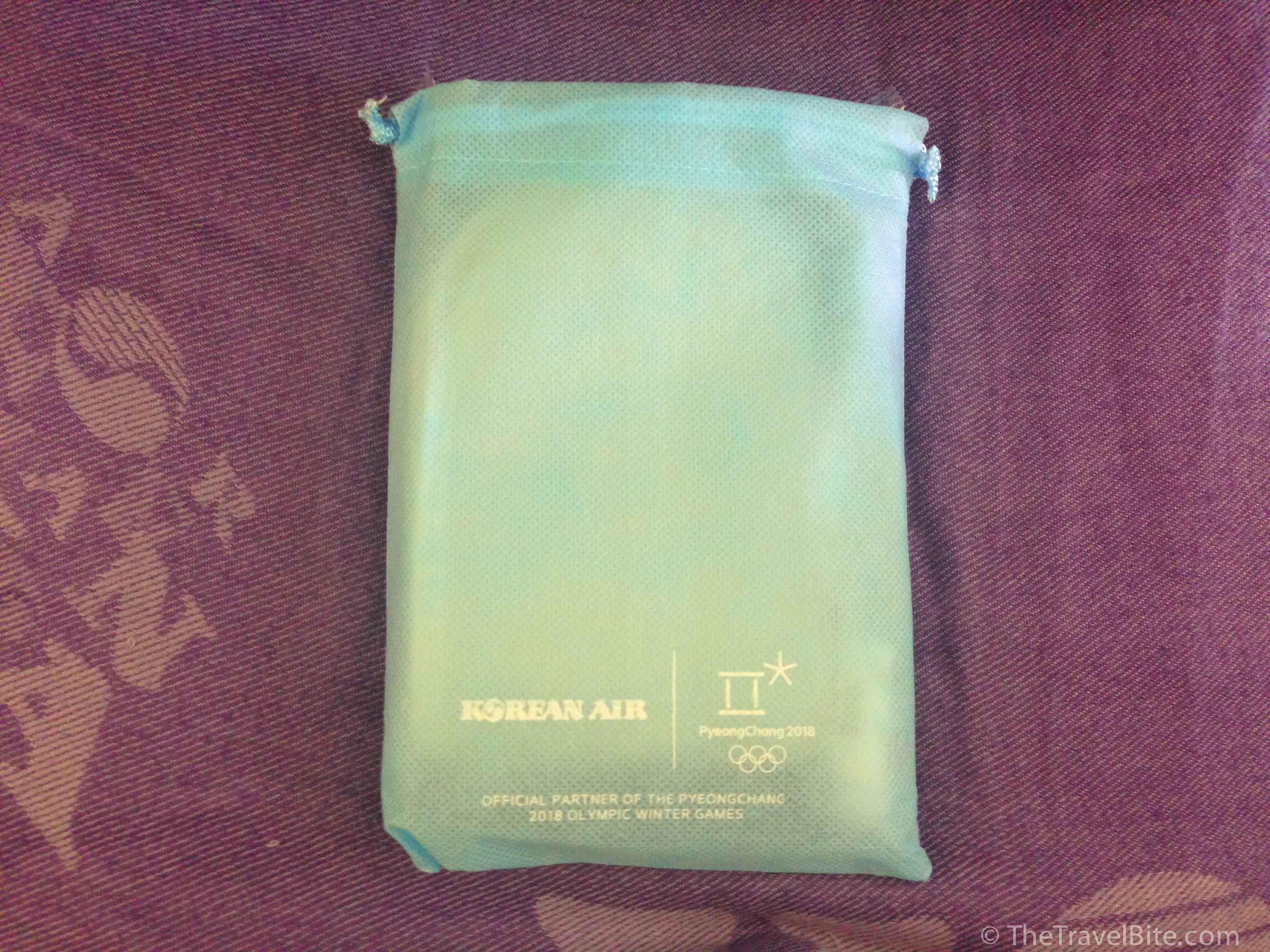 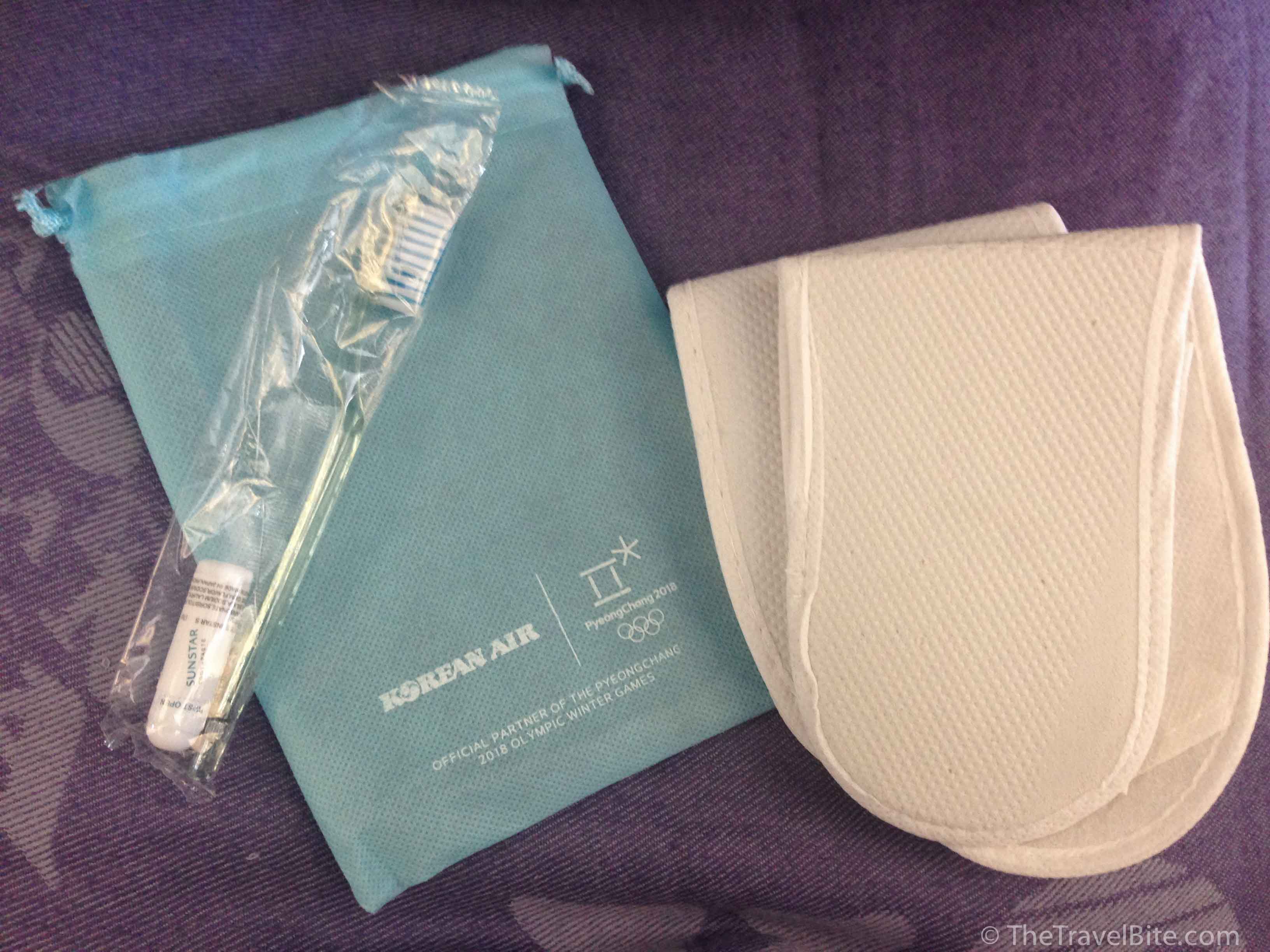 The food from Seoul to Atlanta was impressive!  Having just spent a week in Seoul discovering Korean food, I loved that they had a bibimbap available on the menu.  Int included seaweed rice, kimchi, soup, bean paste and sauce, with pineapple for dessert (again, loving the healthy fruit option!).  My only complaint here is that the ingredients don’t have a list of food allergies in English.  Pete is allergic to shellfish, and since some Asian sauce have shrimp, he ordered something else from the menu so he wouldn’t risk an allergic reaction in the air.  Although, he loves bibimbap!

Also, even though he ordered a beef dish, his salad included shrimp.  They could take a bit of extra care with shellfish allergies. 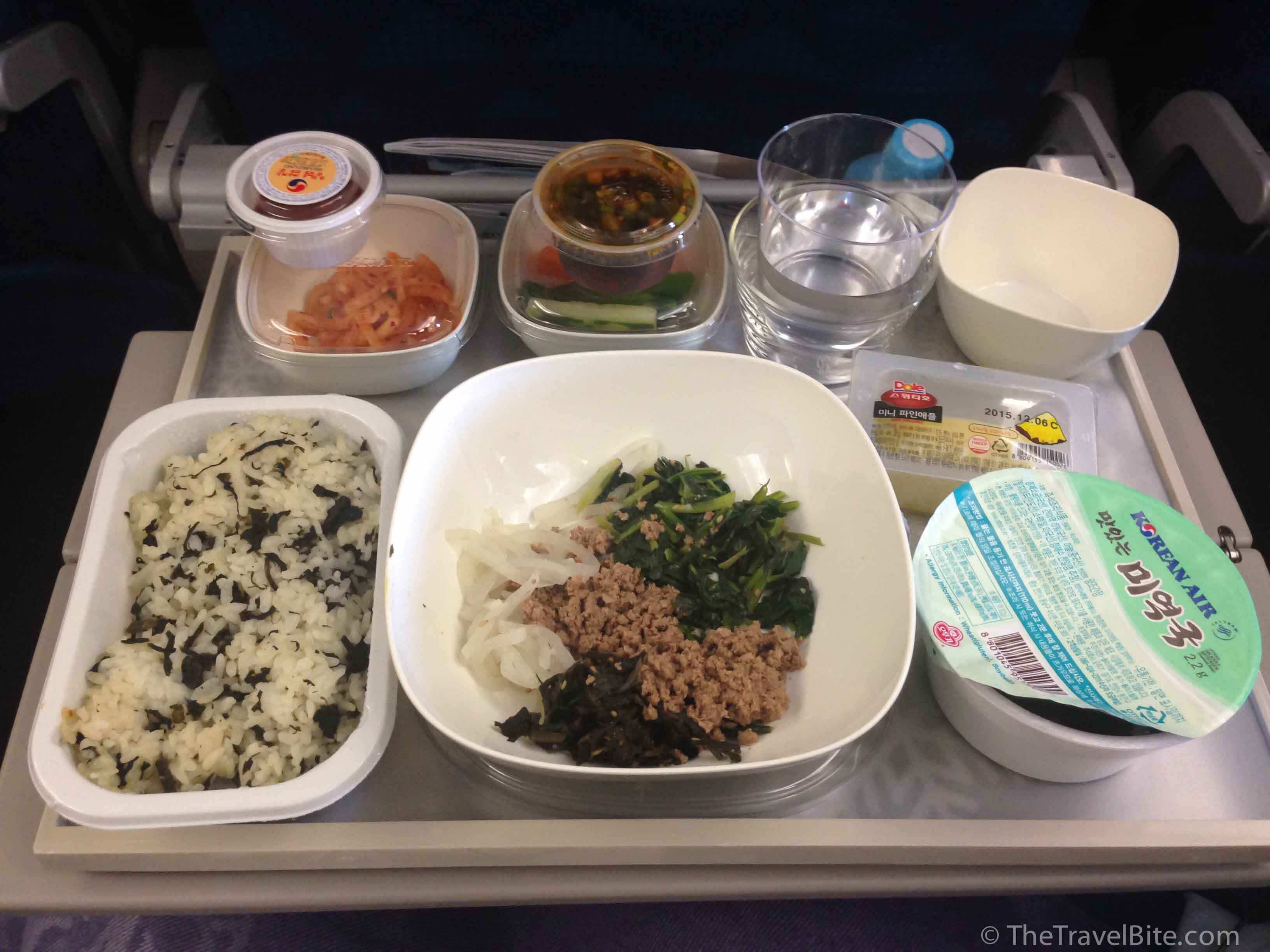 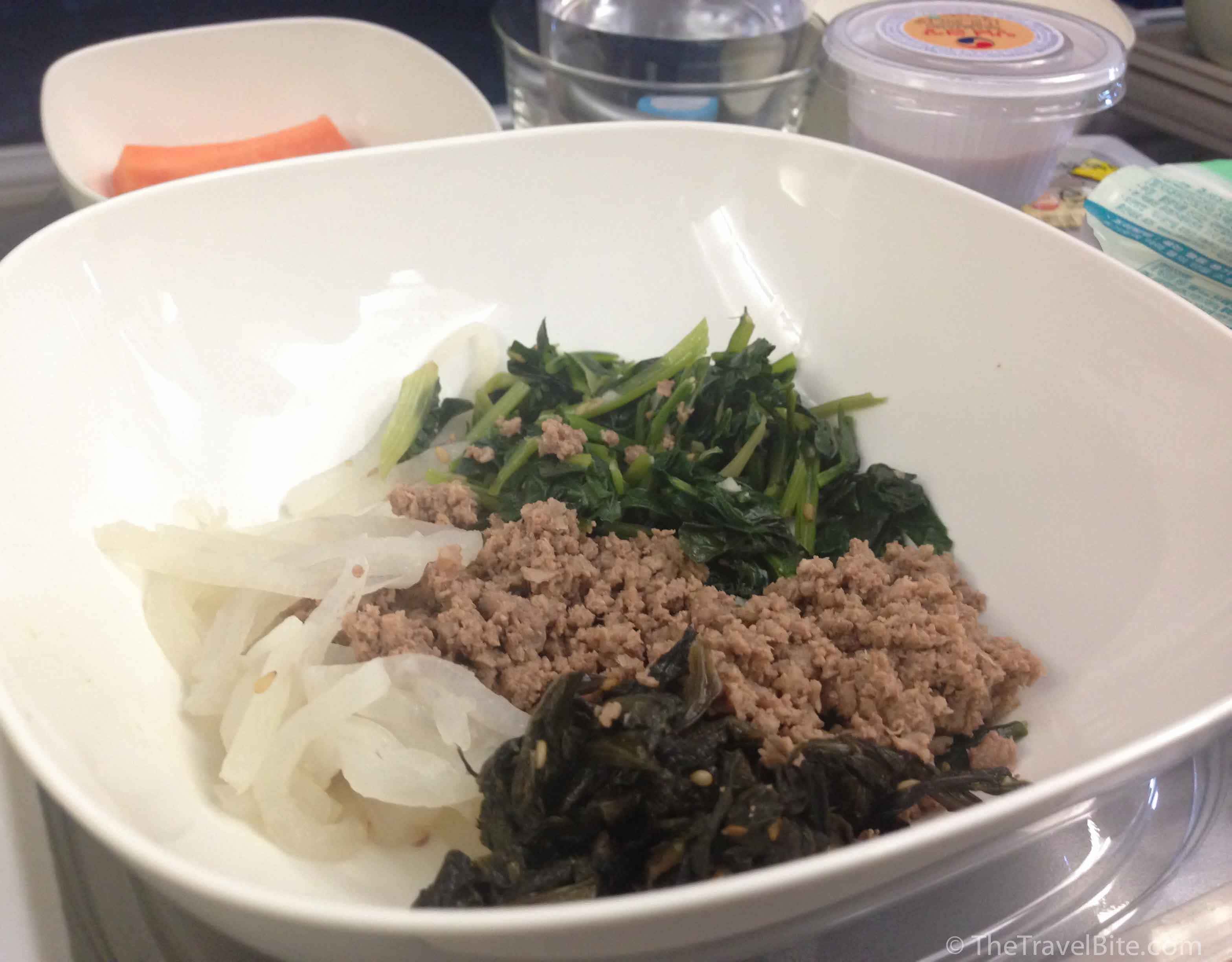 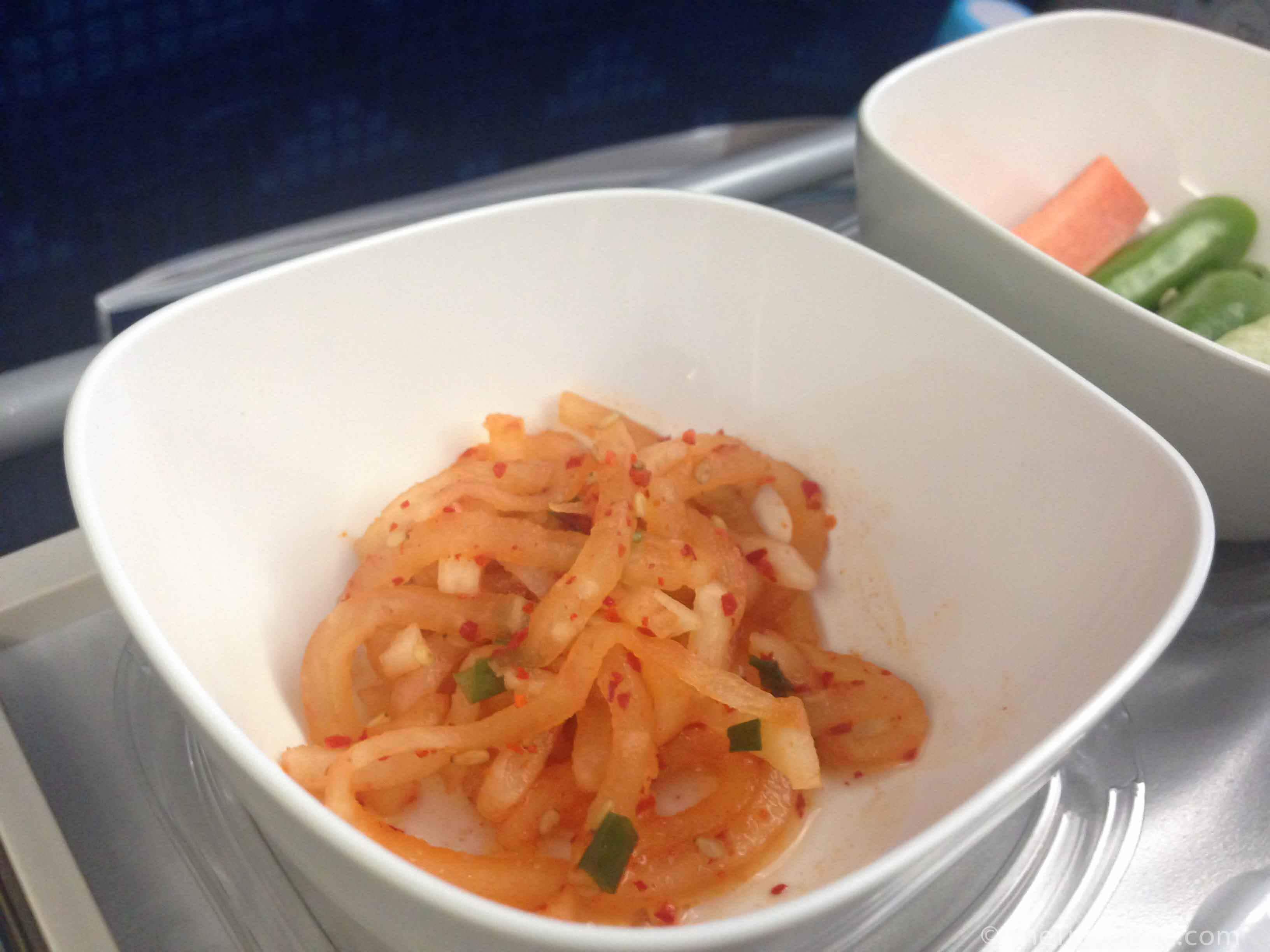 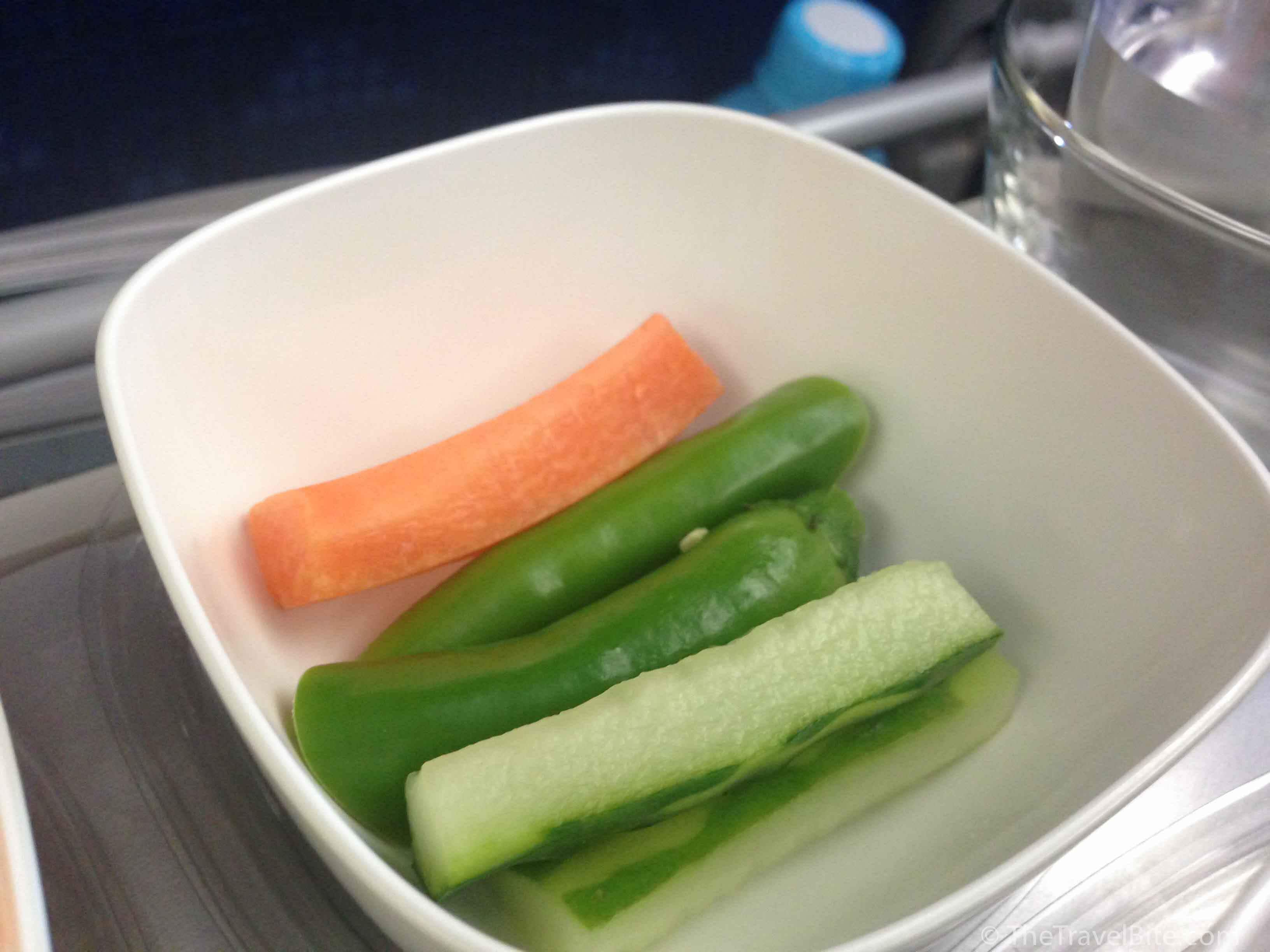 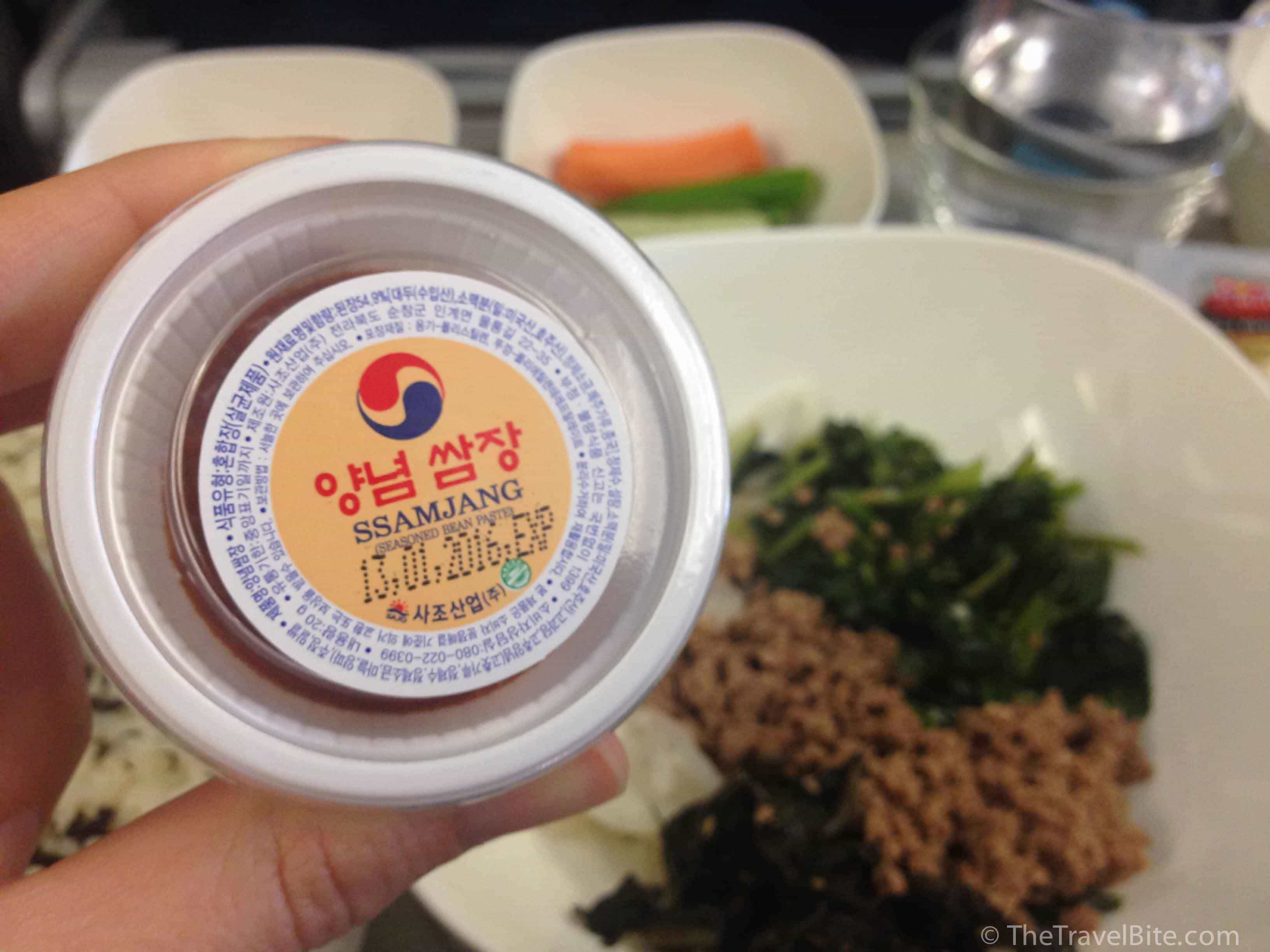 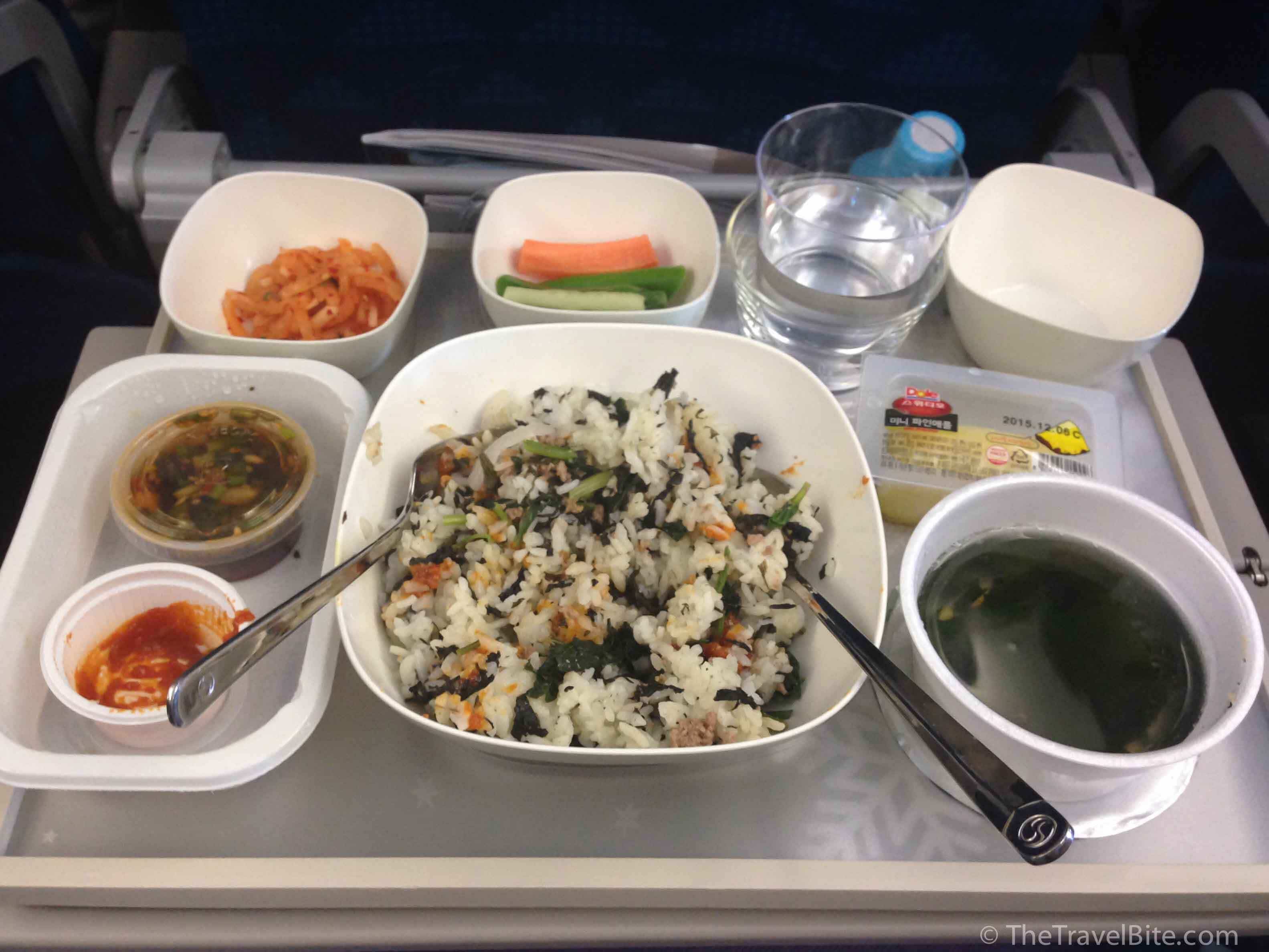 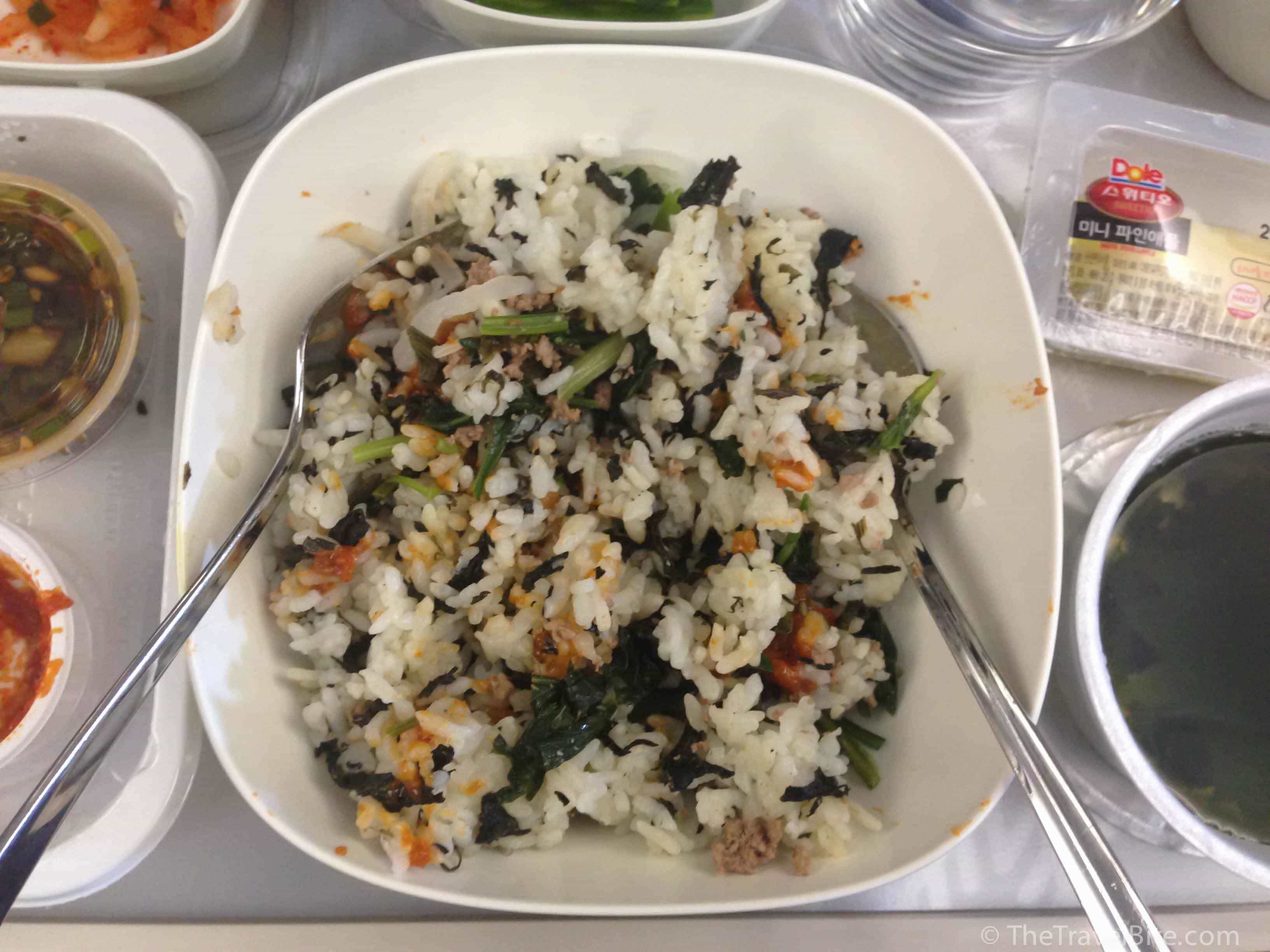 Another fun surprise on the Korean Air flight was the duty free store.  Have you ever seen an actual store set up on a plane?  Usually it’s just the duty free magazine and cart, but this was a completely different level of shopping.  I loved having the ability to test out some of the skin creams and ended up buying some SK-II products duty free and less expensive than the states.  Score! 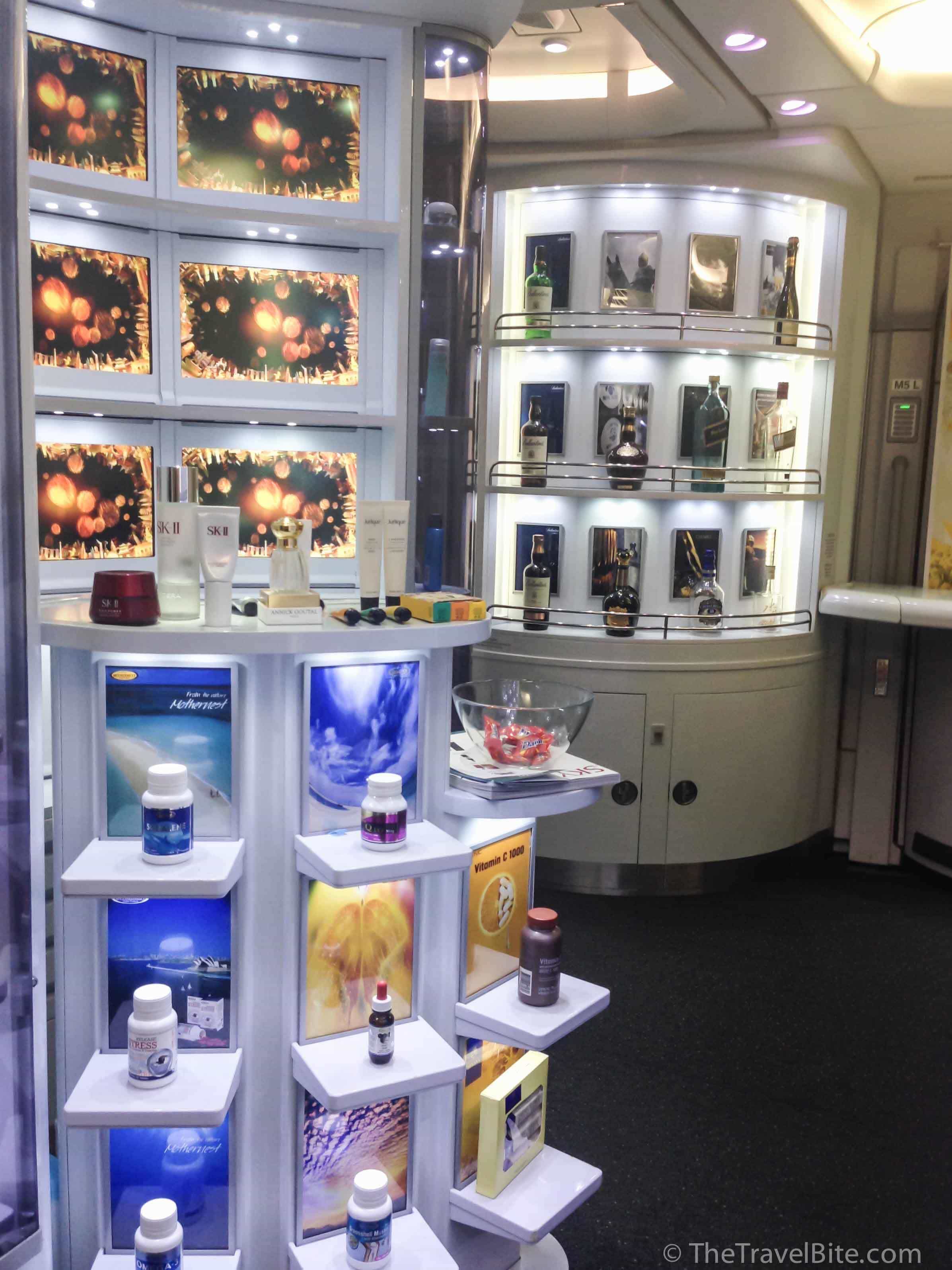 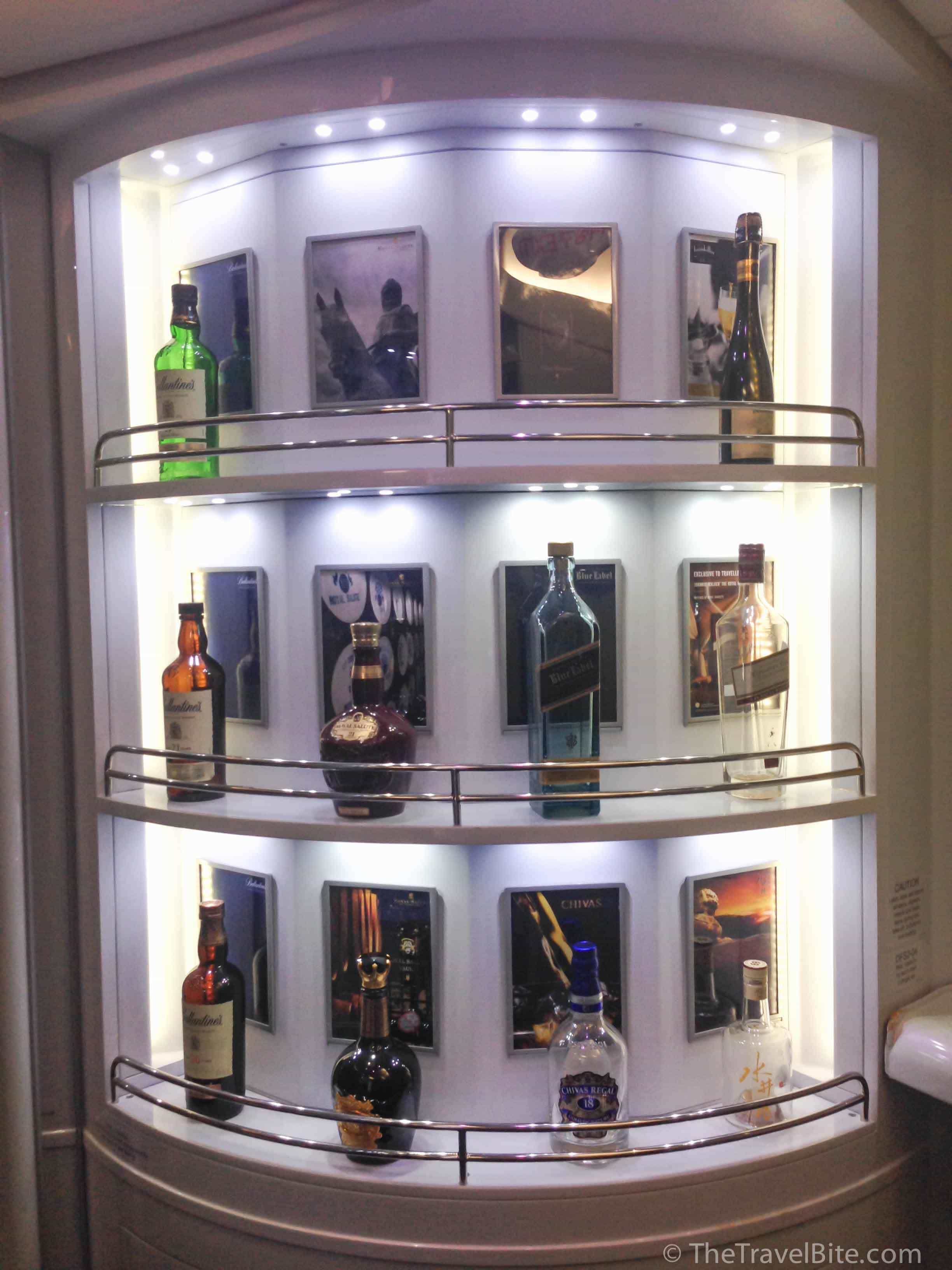 This was our second meal during the long-haul flight from Seoul to Atlanta.  Chicken and rice, Caesar salad, and lychee.  I love lychee, but most Americans I think would wrinkle their nose at this fruit unless they tried it before.  It’s delicious and sweet, just looks a little fleshy when served in a dish like this. 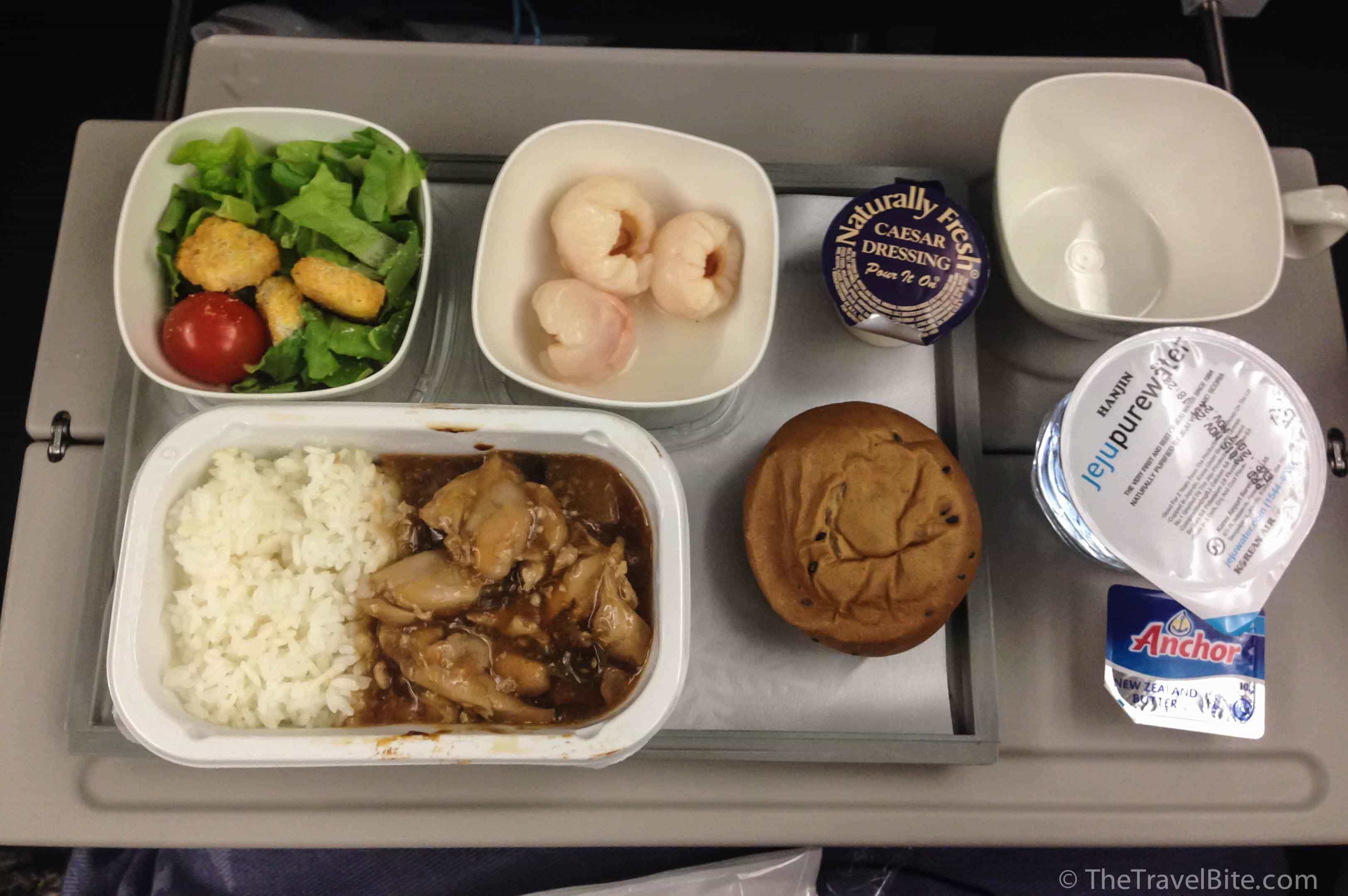 That’s it!  We ate, we watched movies, and we slept. And when we woke up we were in Atlanta with only one other short flight to get home to Orlando.  Have you ever flown Korean Air? What did you think?  Comment below and let us know.

Disclosure:  Our trip to Seoul was sponsored by Korea Tourism Board, however, all thoughts, opinions, and enthusiasm for travel are entirely our own.

Want to save this review for your travel planning? Pin it! 🙂