Inspired by my tea experiences in London, as well as my obsession for all things Downton Abbey, I had to make these easy cucumber sandwiches at home. This British tea tradition is simple to make, but there are a few tricks to get cucumber sandwiches just right. But once you get a little assembly line going of bread, cucumbers, mascarpone (or cream cheese), and salt … you’ll have a party-sized platter of cucumber tea sandwiches in no time!

If you’re ready to make a cucumber sandwich, simply hit the “jump to recipe” button to get started. Or scroll through below for some helpful tips and tricks.

How To Make A Cucumber Sandwich

Cucumber sandwiches are perfect for afternoon tea or hosting a celebratory brunch at home. They’re easy to make, and with just a few simple tricks, you can make a cucumber sandwich just as good as a tea room in London. 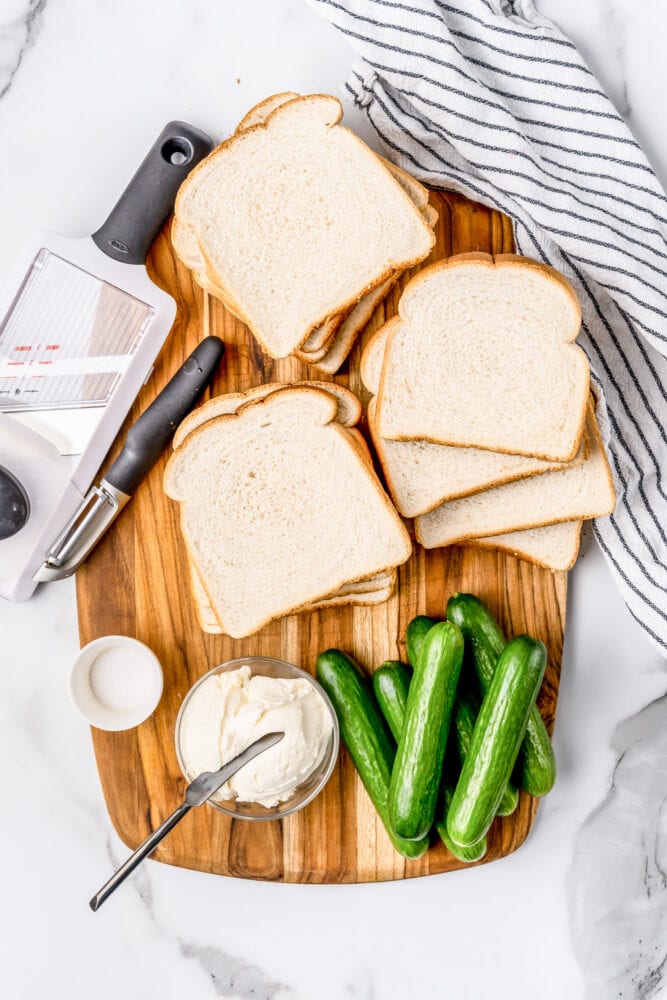 First, you want to get smaller cucumbers, like the kind used for pickling, since they tend to be a bit more crisp and less watery. Second, using a mandolin will help you slice the cucumbers paper thin. Just be sure to use the safety grip provided with the mandolin to protect your fingers.

Typically, cucumber tea sandwiches are made with paper thin slices of cucumber, white bread with the crusts removed, and butter. Instead of butter, I like to use mascarpone cheese since it still gives a nice creaminess and is easier to spread. You could also use a softened cream cheese.

When you’re shopping for bread, choose a loaf that has a pretty square shape (like Pepperidge Farm) to make it easy to cut and remove the crusts.  Also, I found that sprinkling a little salt on the cucumbers brings out their flavor, otherwise it can taste kind of bland. 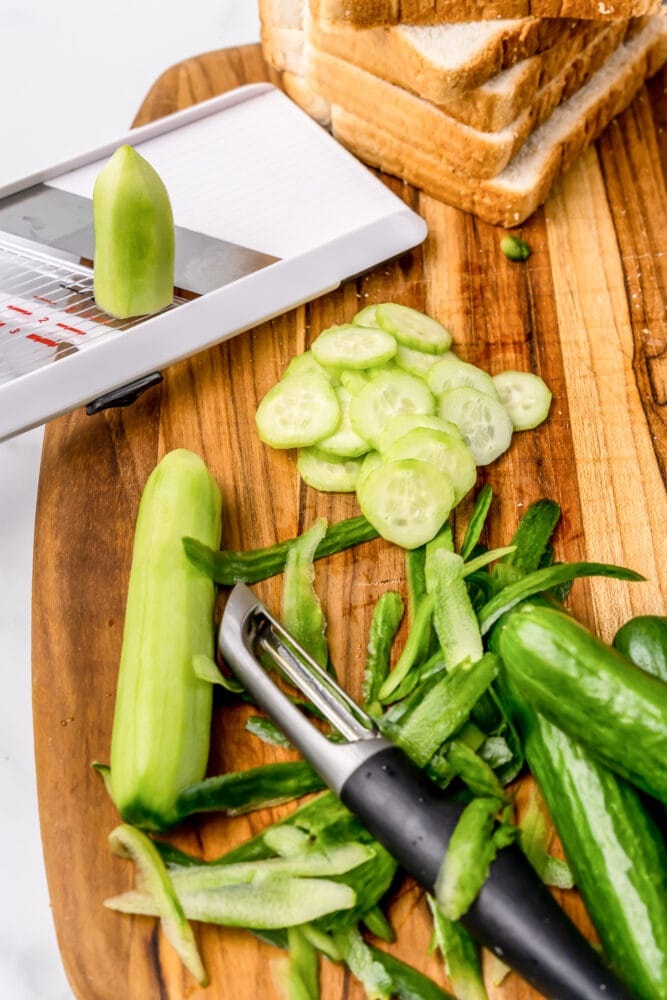 Remove the crust from the bread with a sharp knife.

Spread a thin layer of mascarpone cheese on each slice of bread. You could use cream cheese or butter instead of mascarpone, but I personally think mascarpone is the perfect spread for a cucumber sandwich. It’s creamy without being too heavy and spreads nicely on the bread. 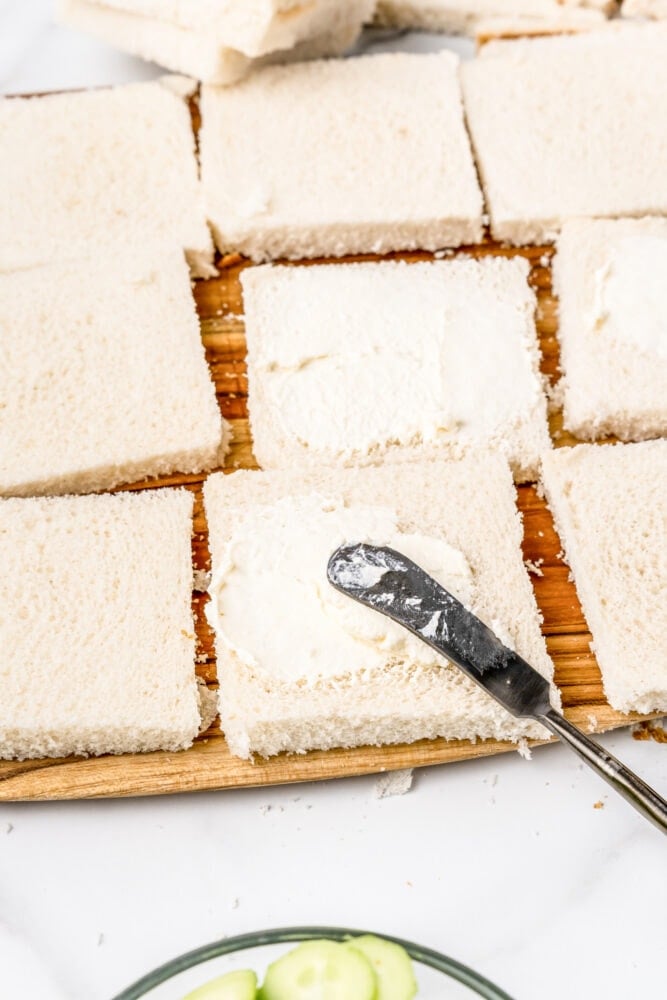 Add a thin layer of cucumbers (6-9 slices) and sprinkle the cucumbers with a pinch of salt. 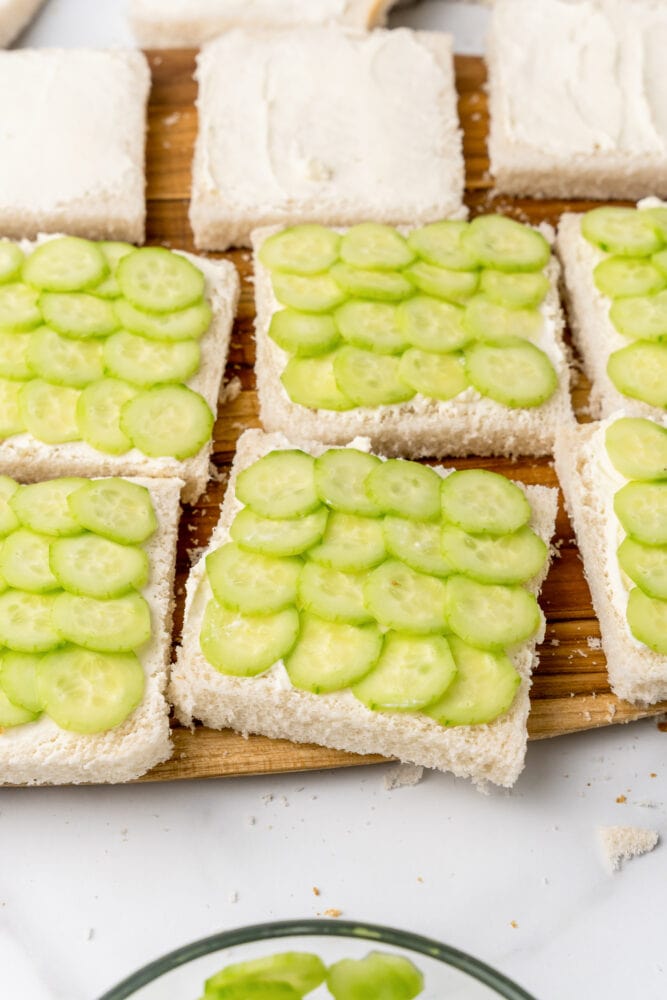 Add a top slice of bread and then cut the sandwich in half diagonally, creating a triangle shaped cucumber sandwich. 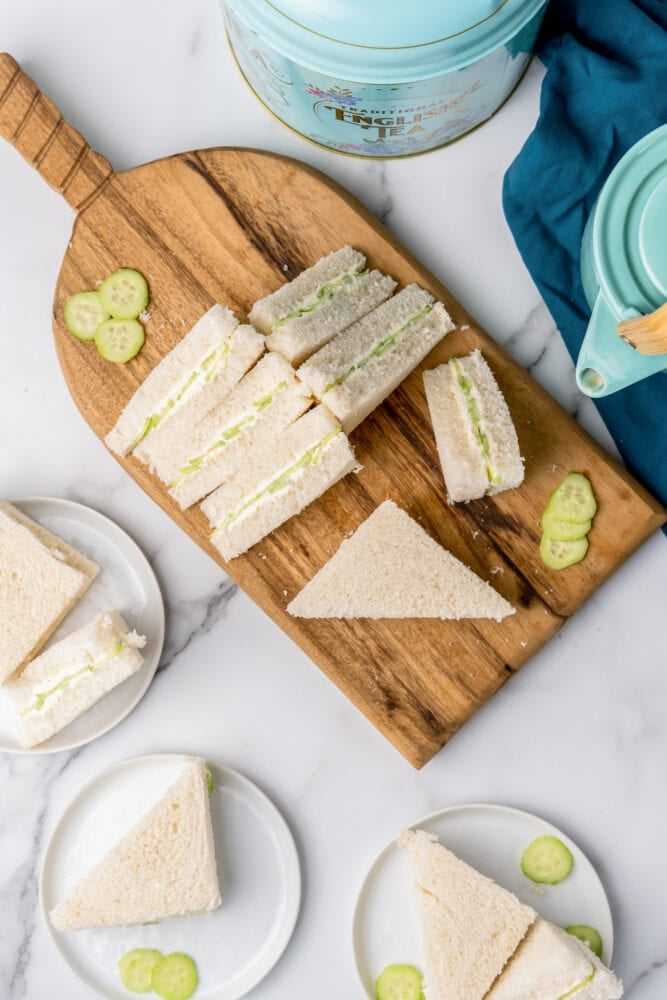 Serve with your favorite tea and scones. 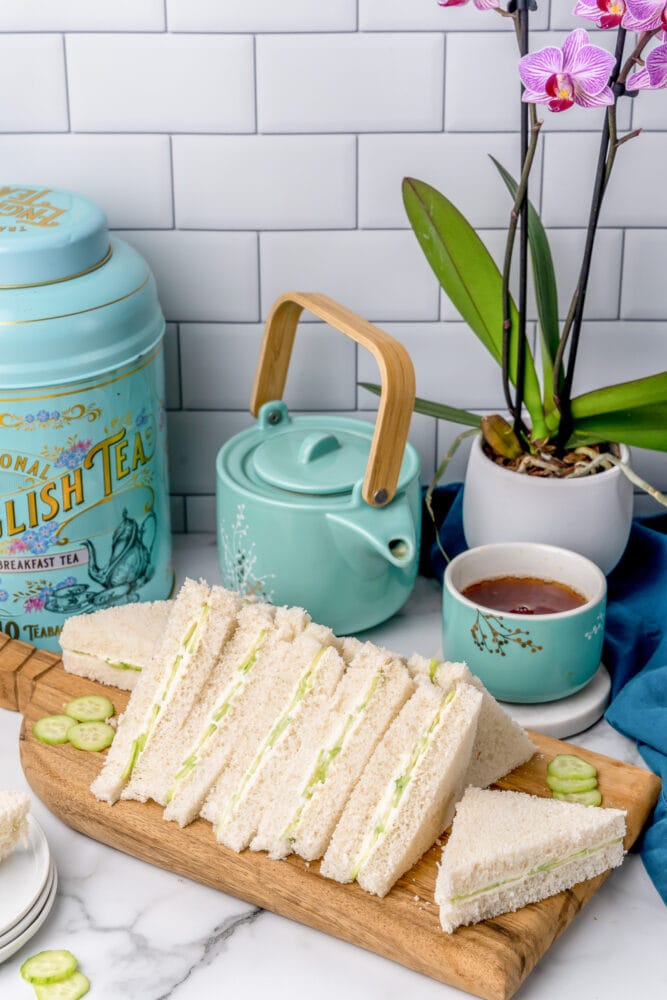 How far in advance can you make cucumber sandwiches?

This is a question I’ve been asked before on social media, so I thought I’d answer it here. You can make the cucumber sandwiches in advance up to 2-3 hours before serving. It is not something I’d make overnight as the mascarpone will soften the bread. And that combined with the cucumbers could make them soggy.

If you’d like to save some time, you could prep everything the night before. Remove the crusts from the bread and store in an air tight container to keep it fresh. And you can peel and slice the cucumbers in advance, store them in the refrigerator, and have them ready to assemble into a cucumber sandwich the next day. 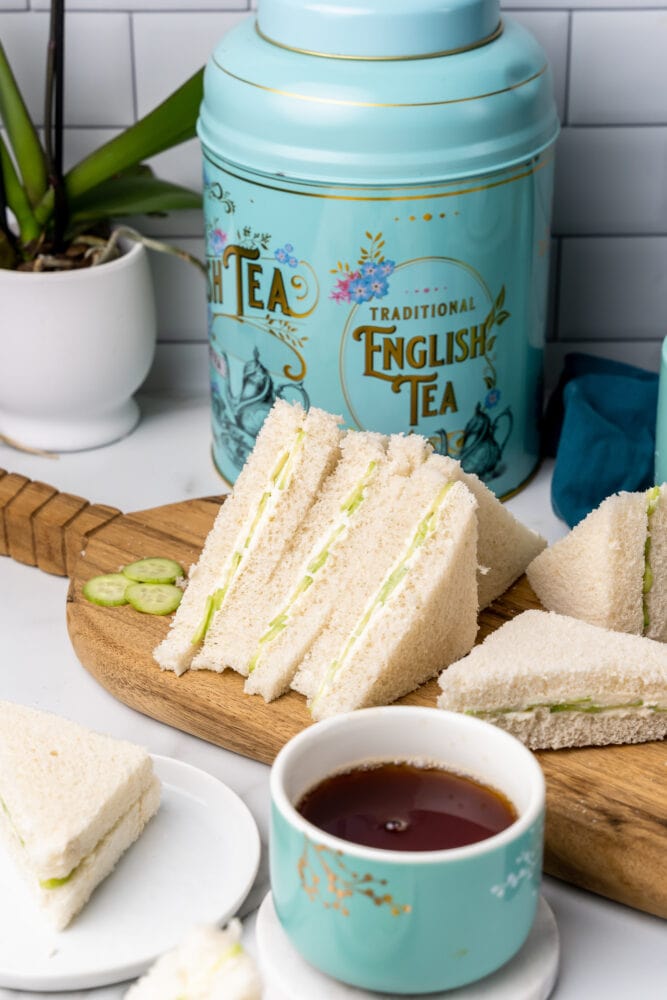 How many sandwiches do I allow per person for afternoon tea?

When planning to host a traditional afternoon tea at home, it’s best to plan for 3-4 half sandwiches (a triangle) per person. If there are other sandwiches and sweets served along with the tea, it might be a little less. But cucumber sandwiches are a popular tea favorite. 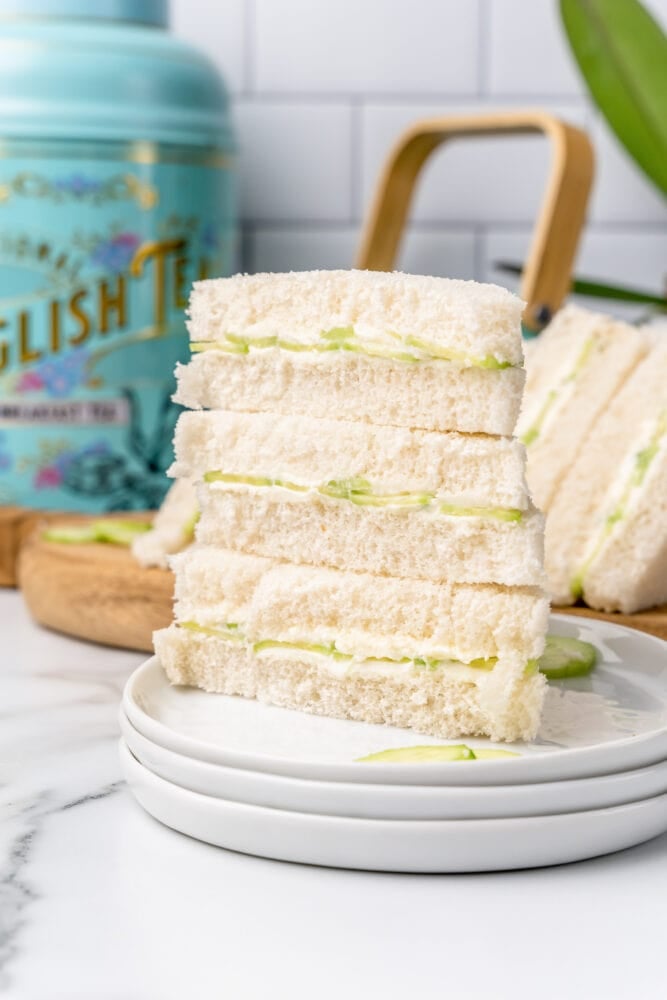 As an alternative to mascarpone, you could also use softened cream chese. 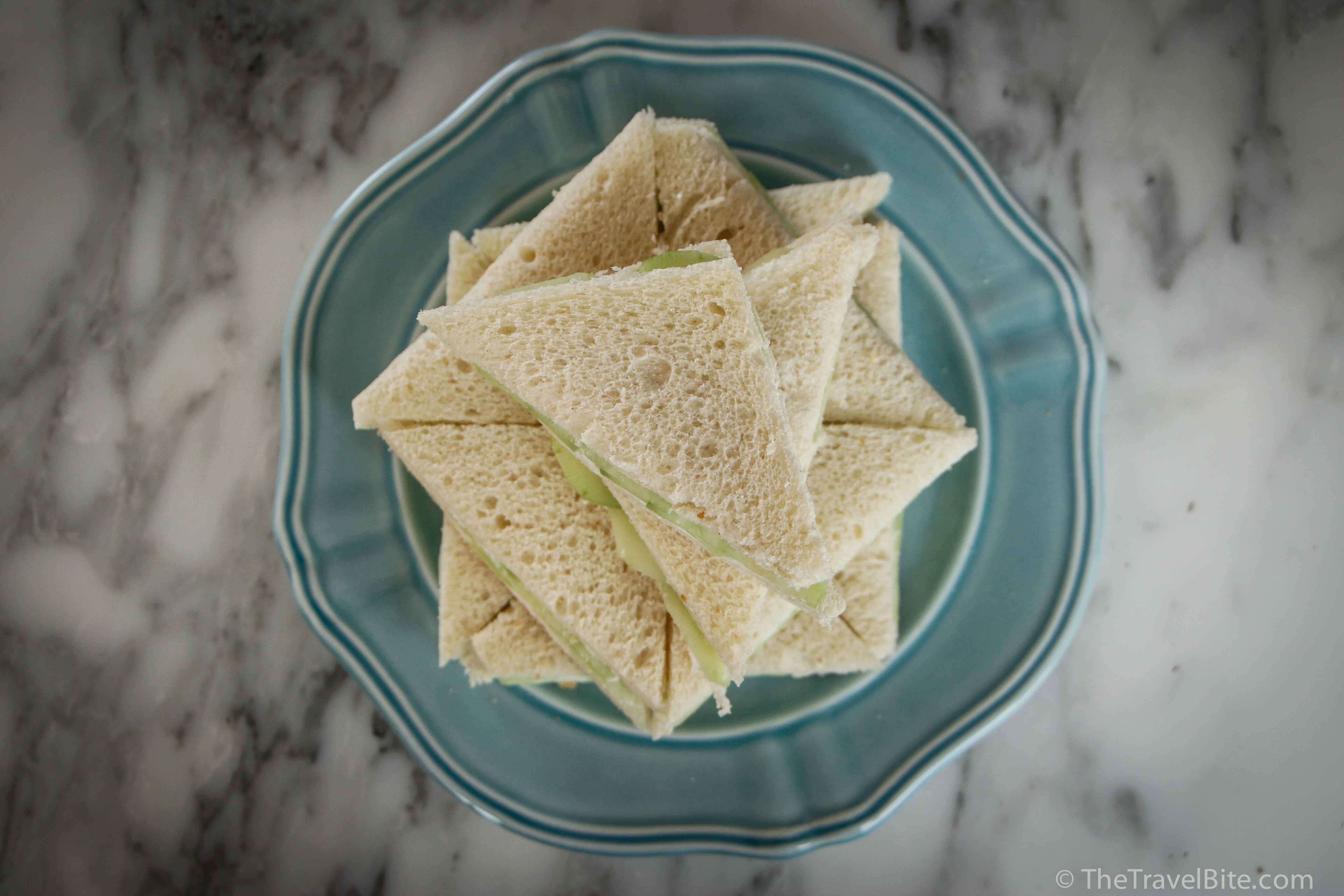 Want to save this recipe idea for later? Pin it! 🙂 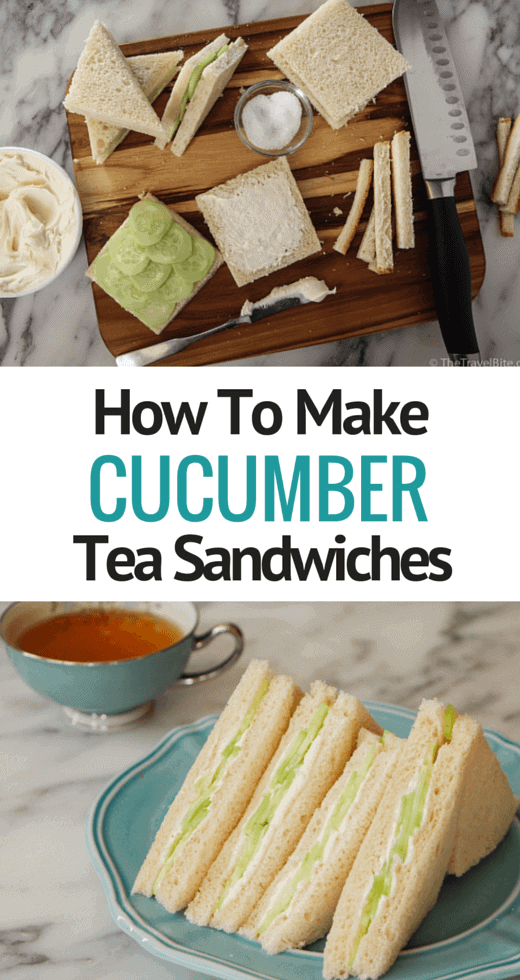