We’ve been craving comfort food, and nothing beats traditional Irish pub food like this slow cooker Guinness Beef Stew. Traditionally it’s made in a Dutch oven, but I like to make mine in a slow cooker. It’s easy to prep in the morning, and the whole house ends up smelling so wonderful that I look forward to dinner all day. There’s nothing like a hearty Irish stew to stave off the cold! 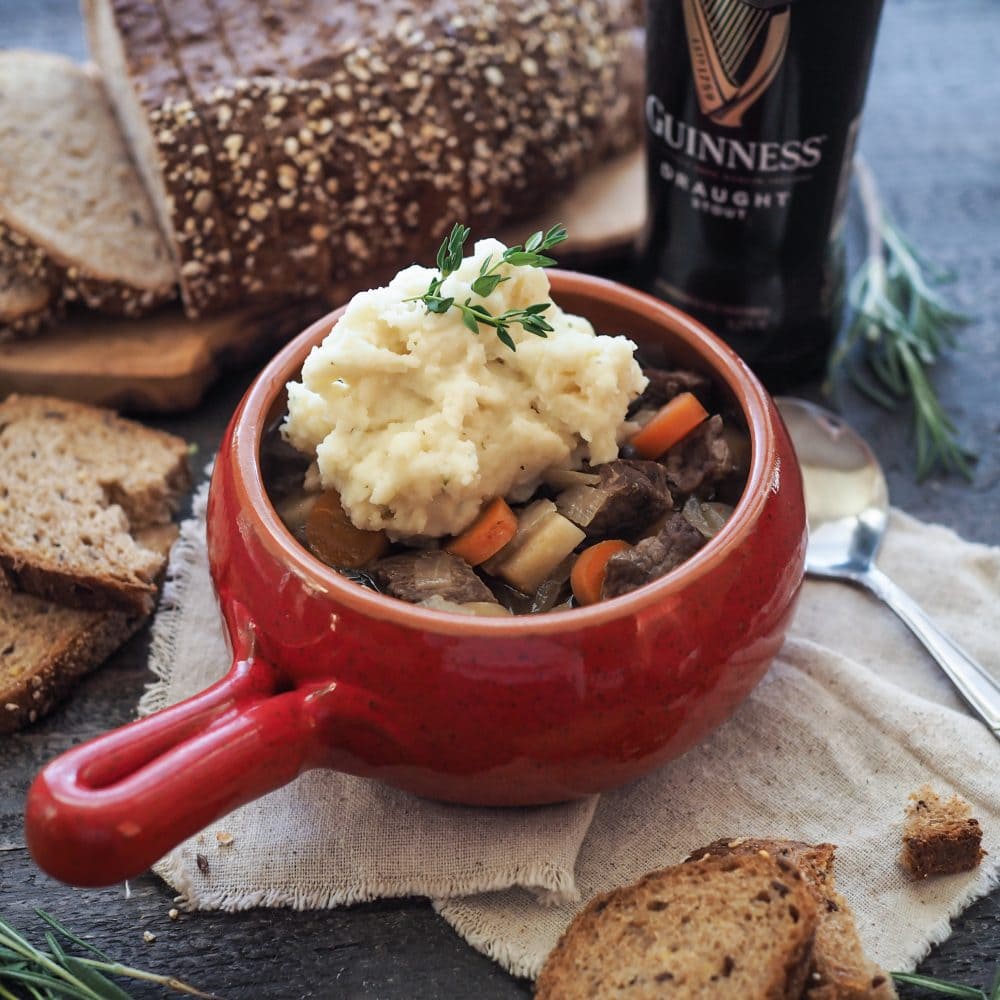 What Is Guinness Beef Stew?

A hearty Irish beef stew is generally made with a tougher cut of meat like a shoulder roast. So adding beer, such as Guinness, helps tenderize the meat and add a more rich depth of flavor. Other ingredients typically include root vegetables like potatoes and parsnips, and of course celery, carrot, and onion for a trifecta of flavor. Mushrooms and tomatoes can also be added, but I didn’t include them in the recipe below.

This history of beef stew actually dates back to Japan where historians found evidence of a rustic soup boiled over a fire. And there are variations in many other cultures as well, including the French beef bourguignon. Traditional Irish stew is very rustic, usually made with only lamb, potatoes, and onions. In Gaelic, it’s called “ballymaloe” or “stobhach gaelach.” Personally, I like this rich, flavorful, root-vegetable filled Guinness Beef Stew Recipe below. It reminds me of warming up by a fireplace in cozy pubs in Ireland.

When making beef stew in a slow cooker, the best way to thicken it up is to add a little cornstarch. About 30 minutes before you’re ready to serve it, ladle out 1/2 cup of broth from the slow cooker. Add 2 teaspoons of cornstarch to the broth and whisk it with a fork until well blended. Then add the broth mixed with cornstarch back to the stew in the slow cooker, gently stirring it to combine with the rest of the broth. Let it cook for another 30 minutes and this should thicken it up.

This recipe is modified from a card I picked up at the Guinness Storehouse in Dublin during our guided food tour of Ireland. What I loved about their Guinness Beef Stew is the simplicity of the ingredients. While Irish stew is typically made in a dutch oven, it was easy to modify for a slow cooker.

Serve with some easy-to-bake cheddar cheese sticks or a loaf of Irish soda bread.

Tip For Thickening Beef Stew -- About 30 minutes prior to serving, ladle out 1/2 cup of broth from the stew. Whisk in 2 teaspoons of cornstarch and stir until well blended. Add the broth and cornstarch back to the stew, stirring gently to combine.

Nutritional information provided only an estimate. 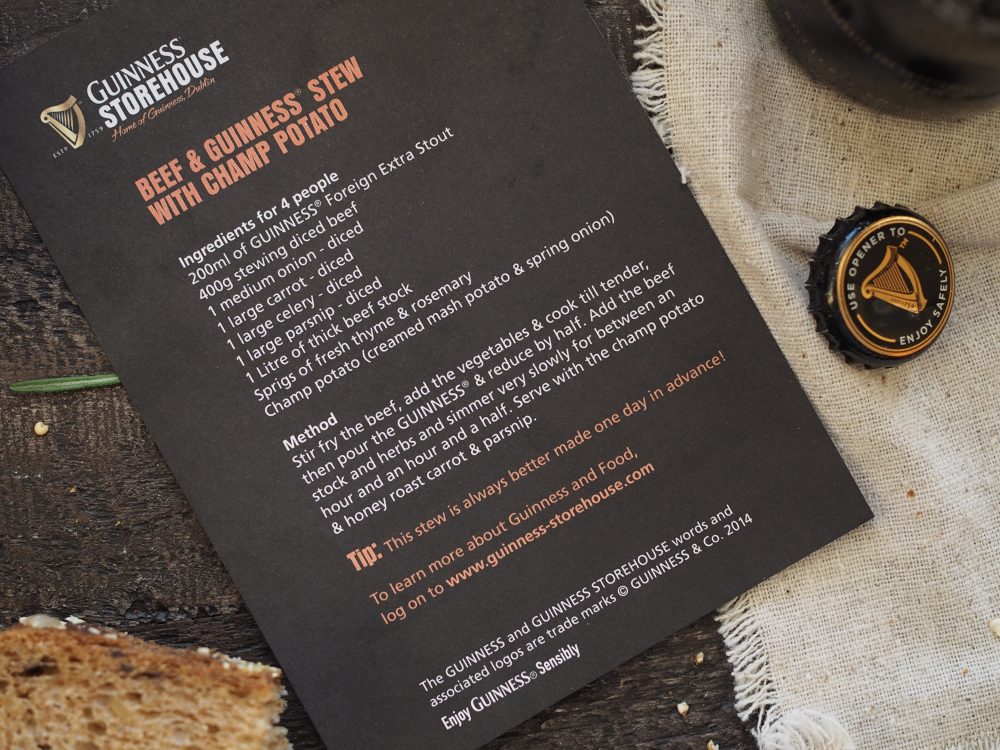 Stir fry the beef, add the vegetables, and cook until tender. Then pour the Guinness and reduce by half. Add the beef stock and herbs and simmer slowly for between an hour and an hour and a half. Serve with champ potato, and honey roast carrot and parsnip.

Tip: This stew is always made better one day in advance. To learn more about Guinness and food, go to Guinness-Storehouse.com 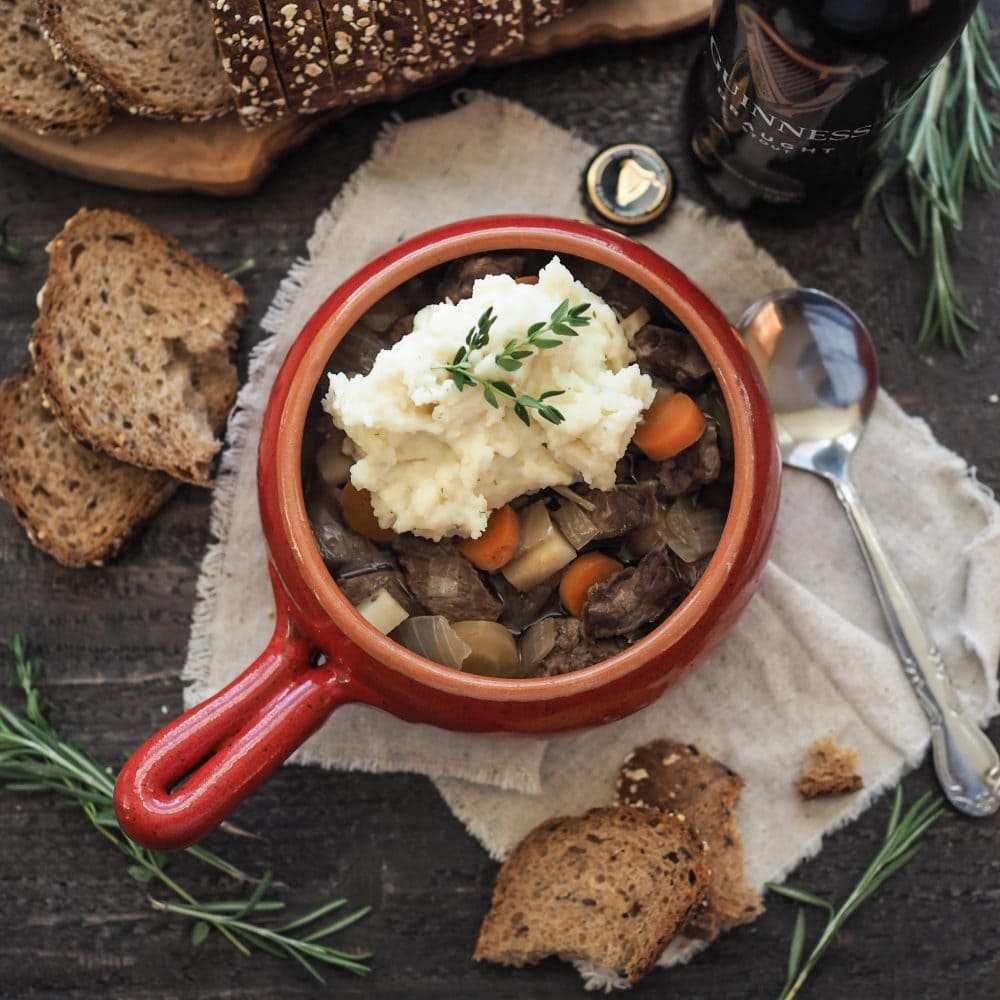 Save this recipe for later and PIN IT on your EASY DINNERS or SLOW COOKER Board! 🙂 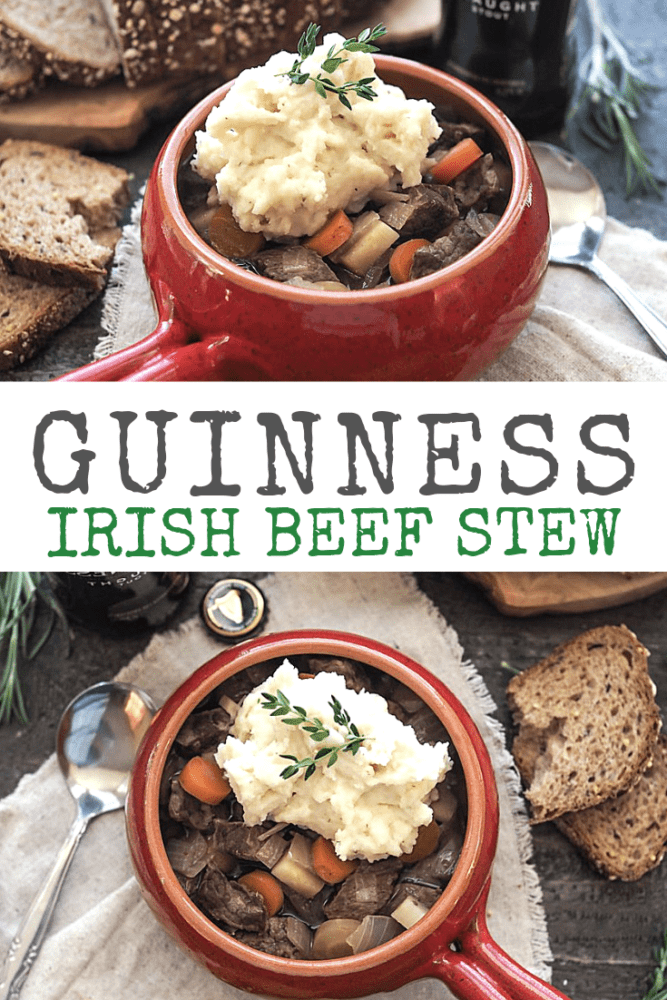