This easy white bean soup is one of my favorite weeknight meals to make when I’m craving something comforting, yet light and healthy. It’s a quick and easy soup and takes about 30 minutes to make from scratch. So there’s no need to plan ahead or pull out your slow cooker.

We have cooking tips for you below as well as a list of ingredients so you can get your shopping done quick. There’s also a jump-to-recipe button if you’re ready to get started! 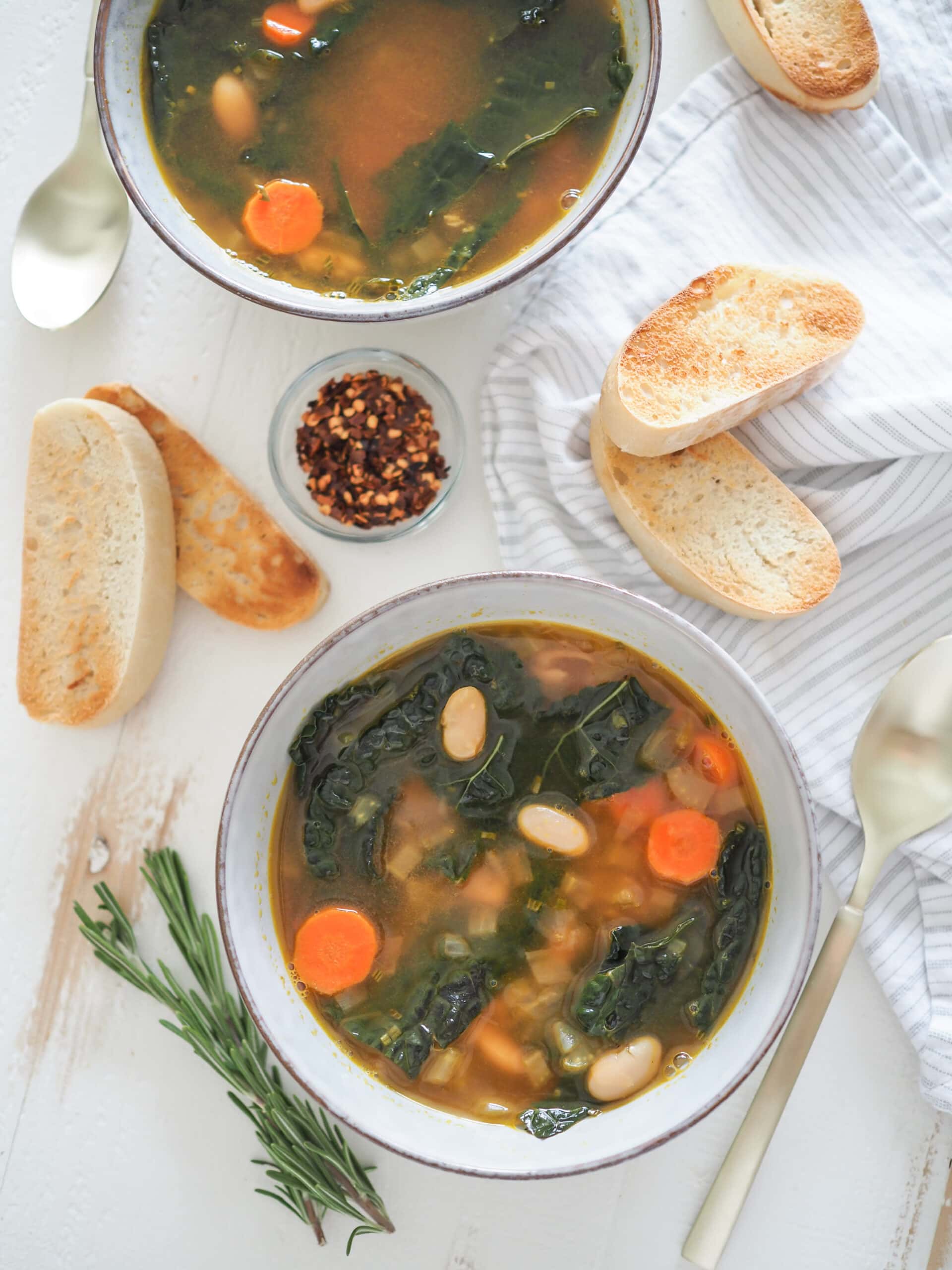 If you’re doing a quick scroll to see what ingredients you’ll need, here’s a list for you as well as some alternatives in case you need to swap anything. What I love about this simple white bean soup is that it is truly a pantry meal you make with ingredients you probably already have on hand.

Also, I made it vegetarian to have at least one hearty hot meal during the week to balance out some of the hearty beef stews and chilis we make during winter. You can also easily adapt it for diets like Whole 30 too by replacing the wine with more broth. 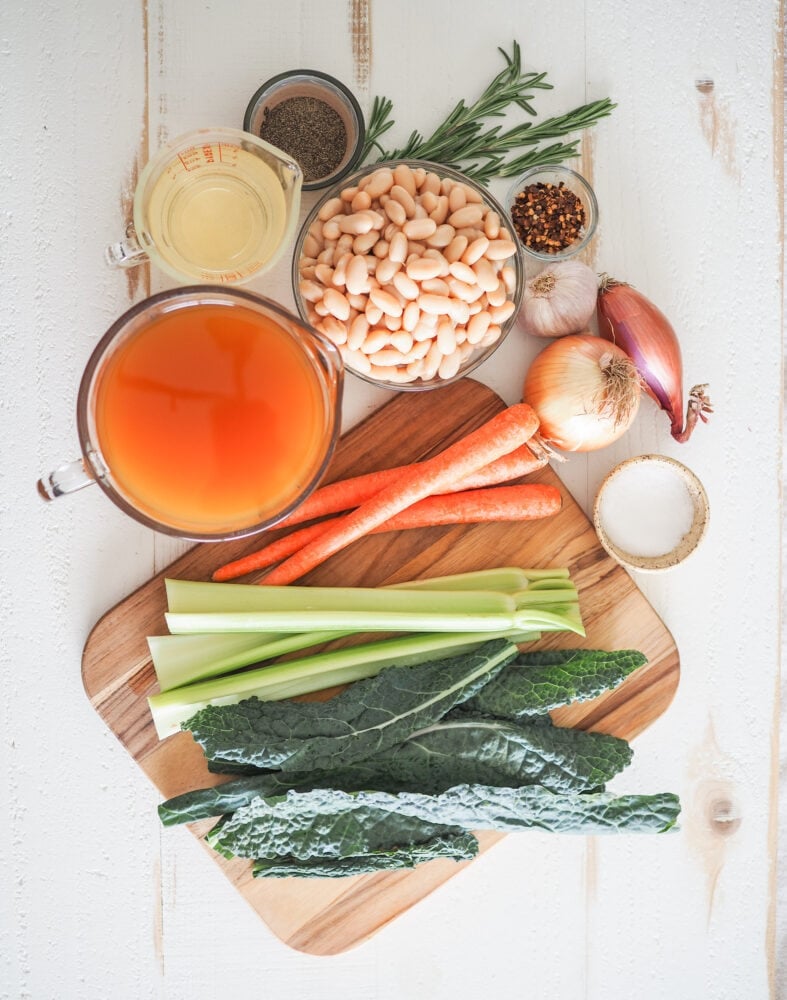 You might see Tuscan White Bean Soup on restaurant menus (and now you can make it from home!), but do you know its history? It is inspired by Ribollita, a  famous hearty bread soup made with cannellini beans, lacinato kale, leftover bread, and inexpensive garden vegetables like carrot, celery, and onion. means Ribollita essentially means“reboiled” in Italian. And it was so named because it was a hearty soup that used a lot of left over ingredients. 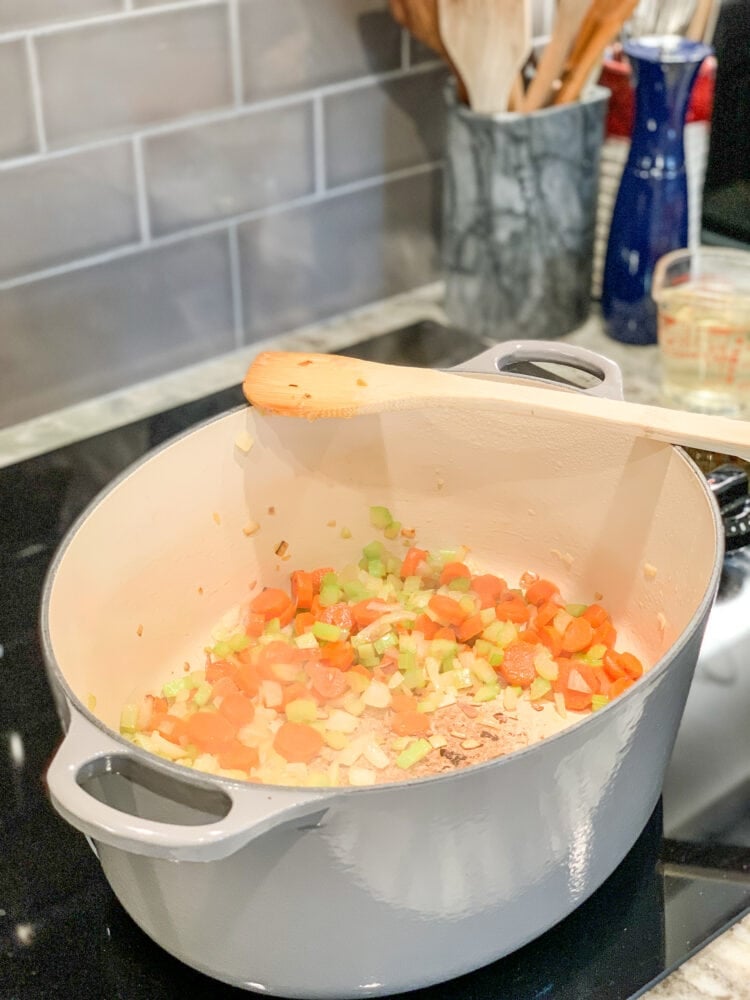 How Do You Make White Bean Soup From Scratch?

This white bean soup is pretty easy to make from scratch. And using canned beans and broth from your pantry will save you some time.

Start by cooking the carrots, celery, and onion in a little oil on medium heat. Once the vegetables have become softened and translucent, add the broth, wine, and spices and let it simmer to further soften the carrots and layer all those flavors together.

After simmering for about 20 minutes, add the white beans and kale to let them cook for the final 5 minutes. This will give you softened, but bright green kale. And the beans will take on the flavor of the broth and heat up without being overcooked. 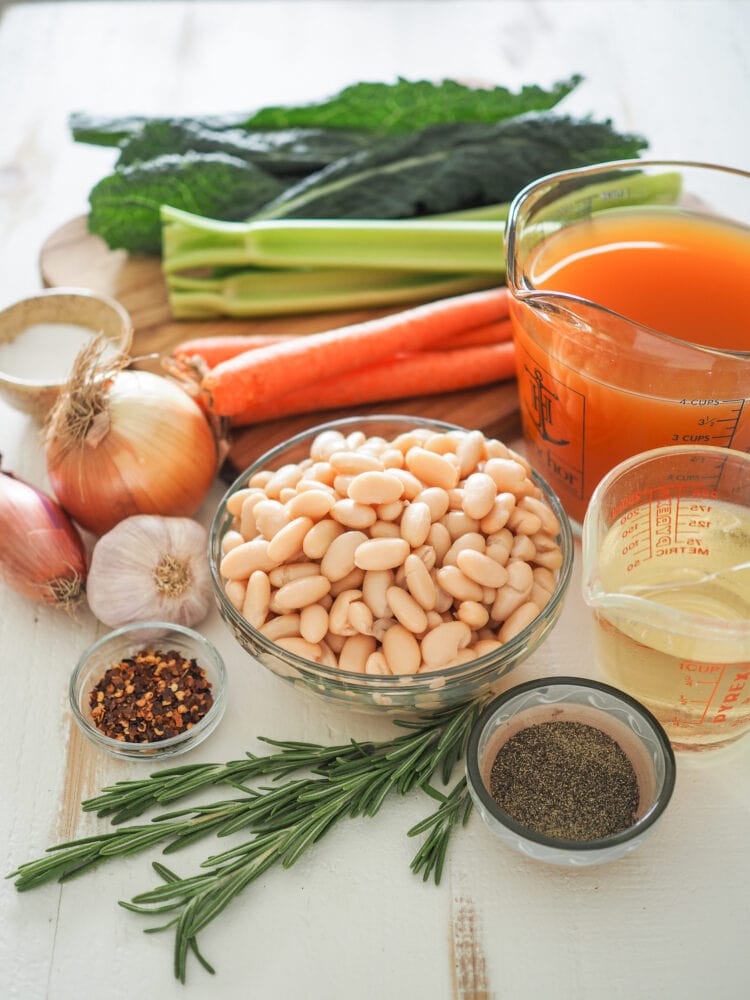 Are White Beans And Navy Beans The Same?

Not all white beans are the same, but truly you could use any canned white bean you have in your pantry for this white bean soup recipe. But I’ll explain the differences between white beans below. There are three types of popular white beans: Navy, Great Northern Beans, and Cannellini Beans. 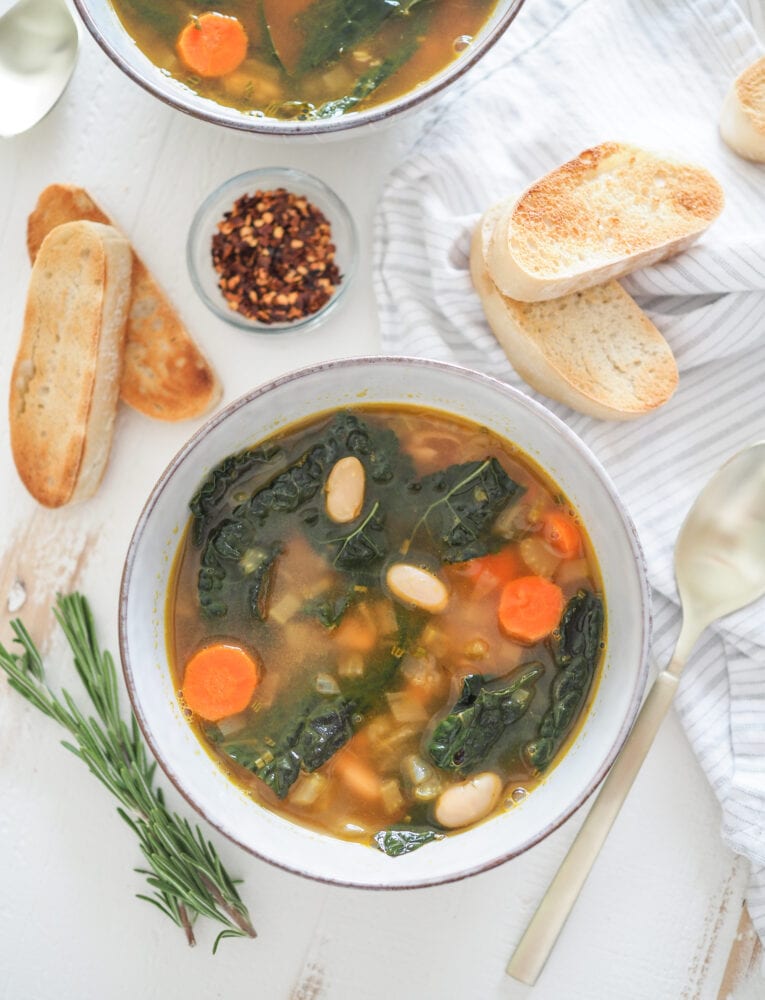 How Do You Thicken White Bean soup?

This soup recipe below is more broth-like in texture. But if you wanted to thicken it up, or make it more creamy, it is easy to do without adding milk or corn starch. Simply reserve a cup of white beans and a half cup of vegetable stock on the side. Then, add the cup of beans and half cup of broth to a food processor and pulse until you have a puree. Then, stir the white bean puree into the soup as it is simmering.

Is White Bean Soup Good For You?

When we get into the middle of comfort food season during the fall and winter, white bean soup is definitely one of my favorite meals when I want something a little more light and healthy-feeling. White beans are high in fiber and protein, making them pretty filling!

And because we’re typically eating a lot of hearty beef stews or chilis, it is nice to have a dairy-free vegetarian soup option during the week that is easy to make.

What To Serve With White Bean Soup

Wondering what to serve with your hearty Tuscan White Bean Soup? Since it is inspired by the Italian Ribollita as mentioned above, a thick crusty bread to dip in the broth would be perfect. I also recommend topping it with a pinch of shaved Parmesan and serving with roasted red pepper flakes on the side in case your family wants to add a bit more heat. 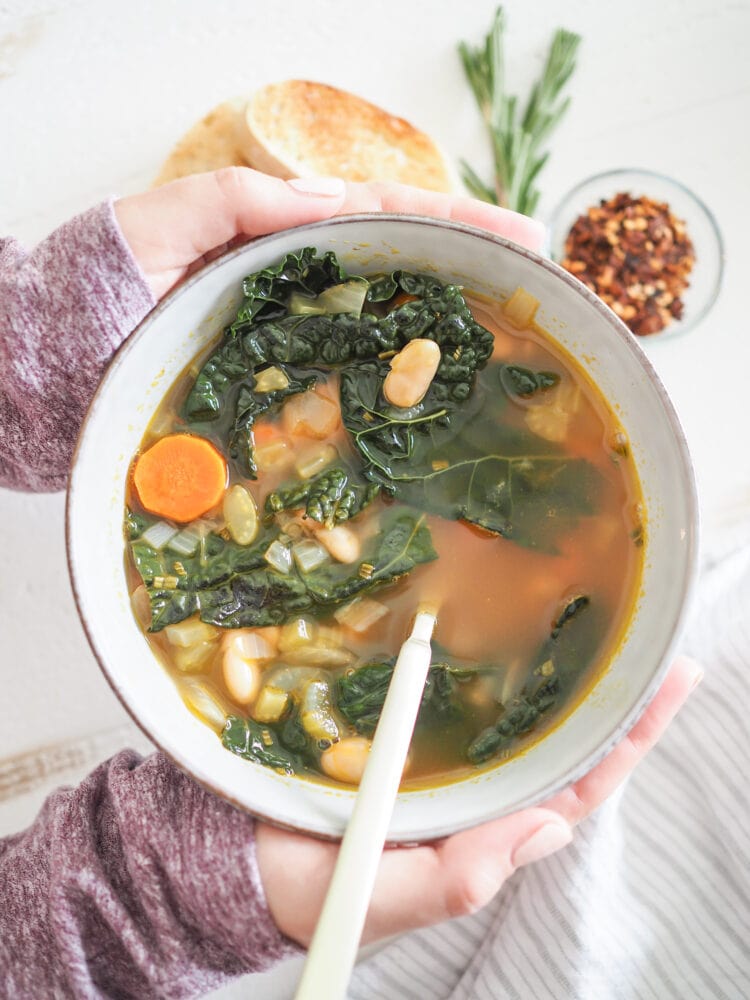 Previous Post: « Bologna Food – A Guide To Italy’s Most Delicious City
Next Post: Tropical Fruits Around The World »