These air fryer donuts dipped in apple cider syrup and cinnamon sugar is one of my favorite sweet treats for fall. Personally, I like this air fryer donut recipe better than the apple cider donuts we taste at local food trucks and autumn harvest events. These air fried donuts truly taste like apple cider! And since these are air fried donuts, they hold on to flavor without the greasy aftertaste of regular donuts. We hope you love them as much as we do! Scroll through for some tips and tricks, or hit the “jump to recipe” button to get started. 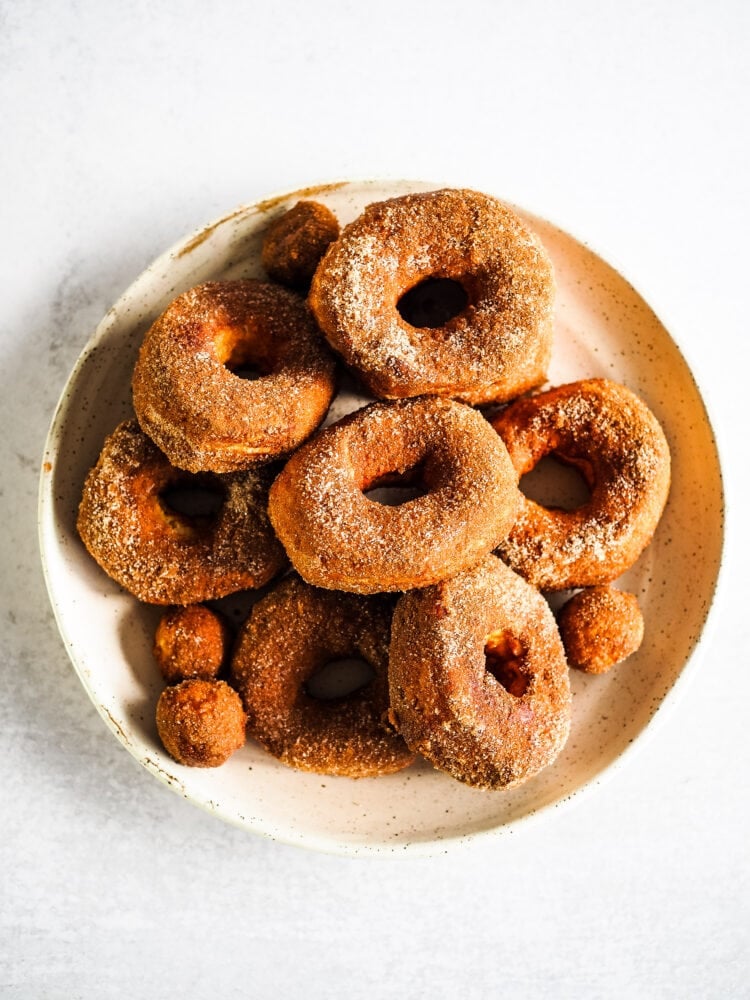 What I love about this air fryer donut recipe is that it is SO easy! Truly, you can make these with just three ingredients. But since it is the autumn season, we spiced them up a bit with an apple cider syrup that tastes like the epitome of fall. Now, could you make these with a biscuit dough from scratch? Sure. But I like to have a few recipes where I can cut corners and save some time, so that is why we like to use store-bought biscuit dough. Our favorite is the buttermilk biscuit dough. And the flaky pull-apart doughs are also great for making it more like a cronut (croissant donut).

This is a recipe we’ve done on-air for Ninja on HSN (the air fryer donut recipe is included with most Ninja air fryers). I have a slightly different method that I like to use to get more golden brown air fried donuts. I like to coat the donuts in cinnamon sugar twice! Once before air frying, and once after air frying. Read on below to see how to make air fried donuts with step-by-step photos. 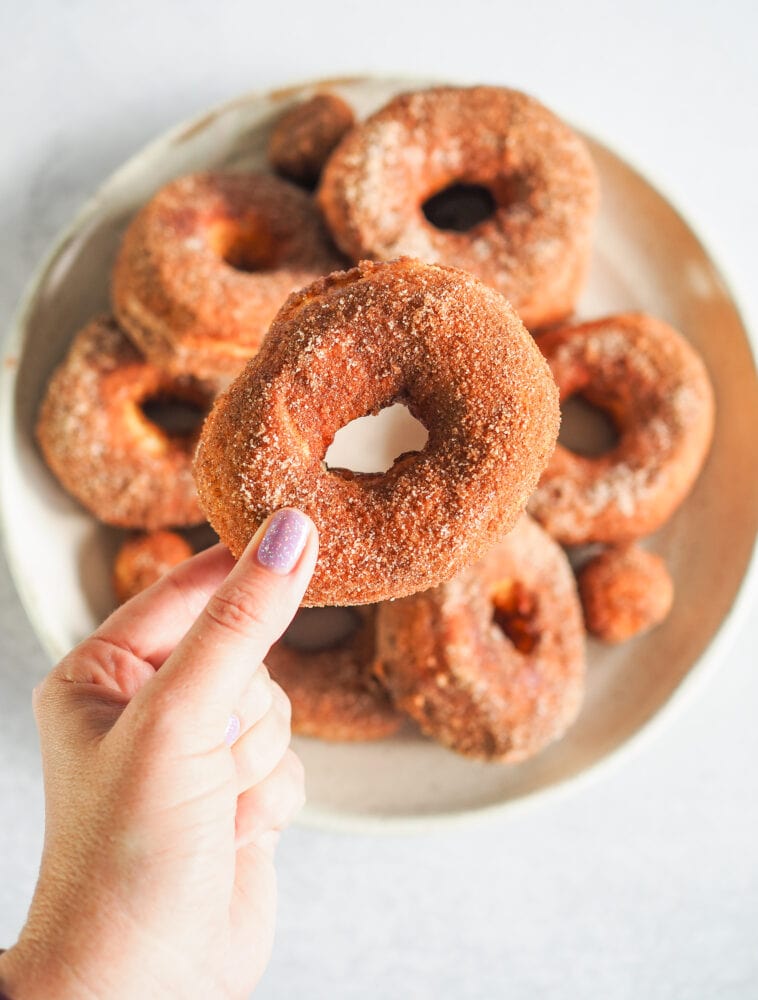 Shape donuts using a small biscuit cutter or bottle. I’ve tried just poking a whole in the center and shaping them with my hands, but the biscuit dough sticks together again when it rises in the air fryer. As for cutting the holes, I use a small bottle to get the perfect size. Roll the smaller dough pieces, the donut holes, in the palms of your hand to shape them. 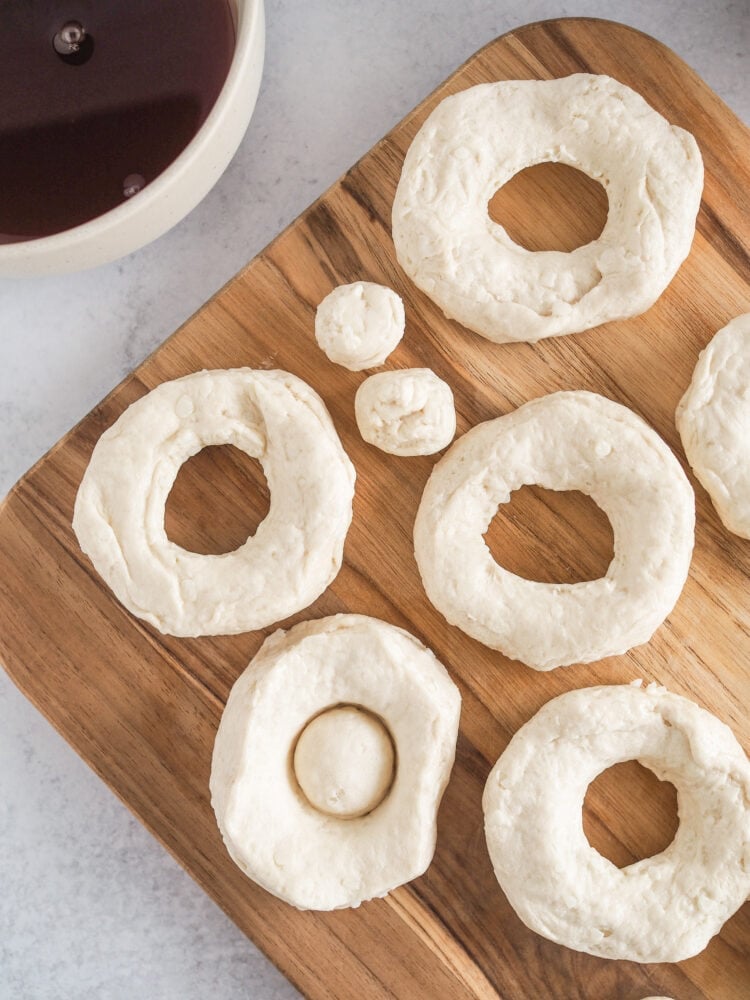 In a small bowl, mix two tablespoons of cinnamon with one cup of sugar. Here is where you can experiment and also try Pumpkin Pie Spice or Apple Pie Spice. Turn your air fryer on and pre-heat at 390 degrees Fahrenheit for five minutes. 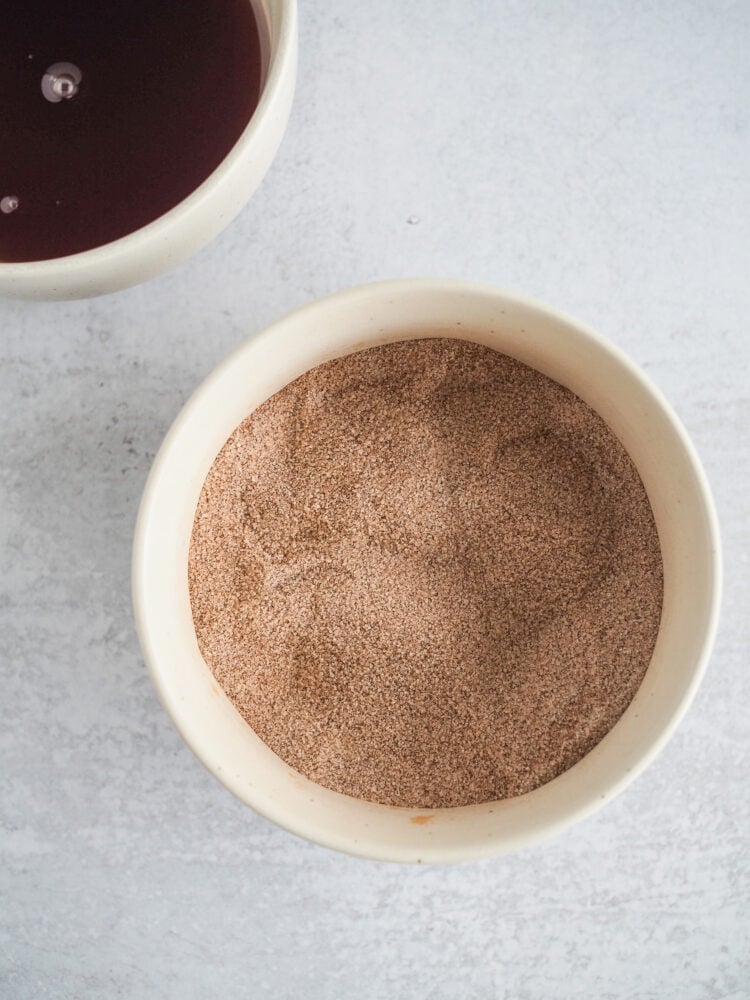 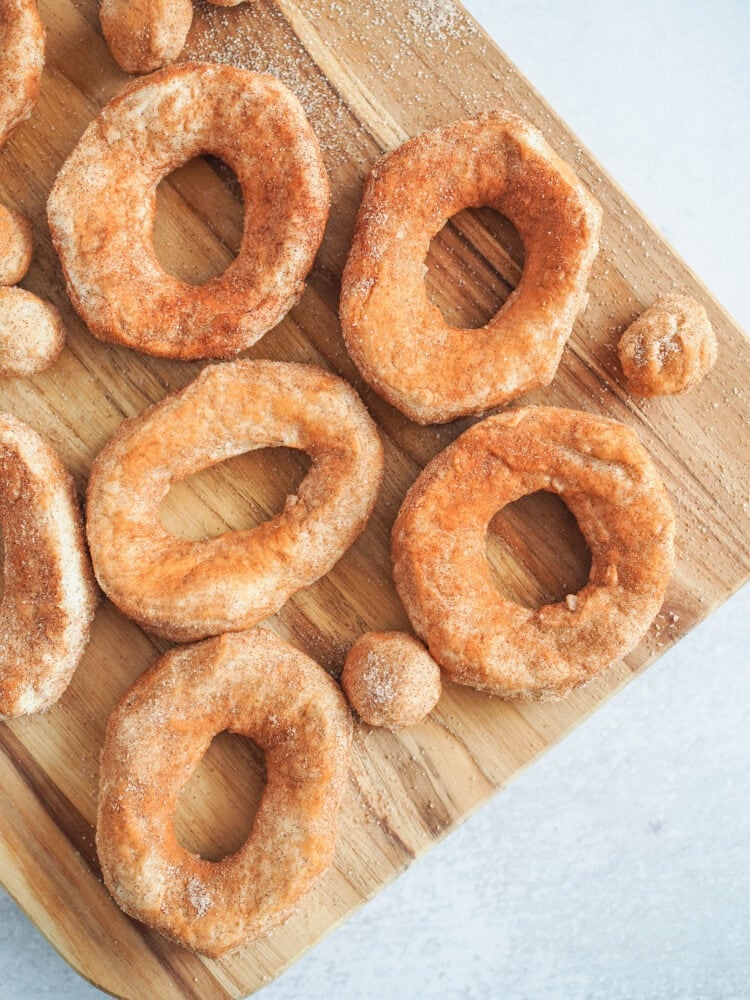 After you’ve coated the donuts in cinnamon sugar, carefully place each donut into your air fryer basket. Leave some room between the donuts to allow the hot air to move freely and to give the donuts room to rise. You may have to air fry these in batches. 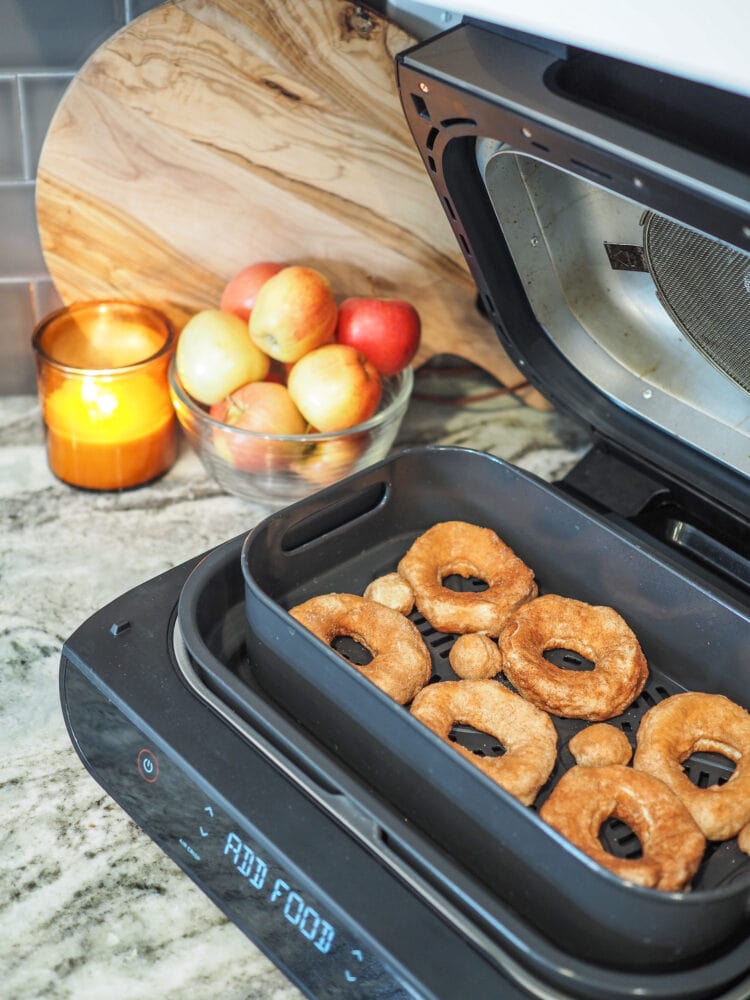 Lower the temperature of the air fryer to 350 degrees and air fry the donuts for 10-12 minutes. For deeper air fryer baskets, such as the ones in XL air fryers, you may need to add a little more time. Check them after 10 minutes and add a minute at a time until done. 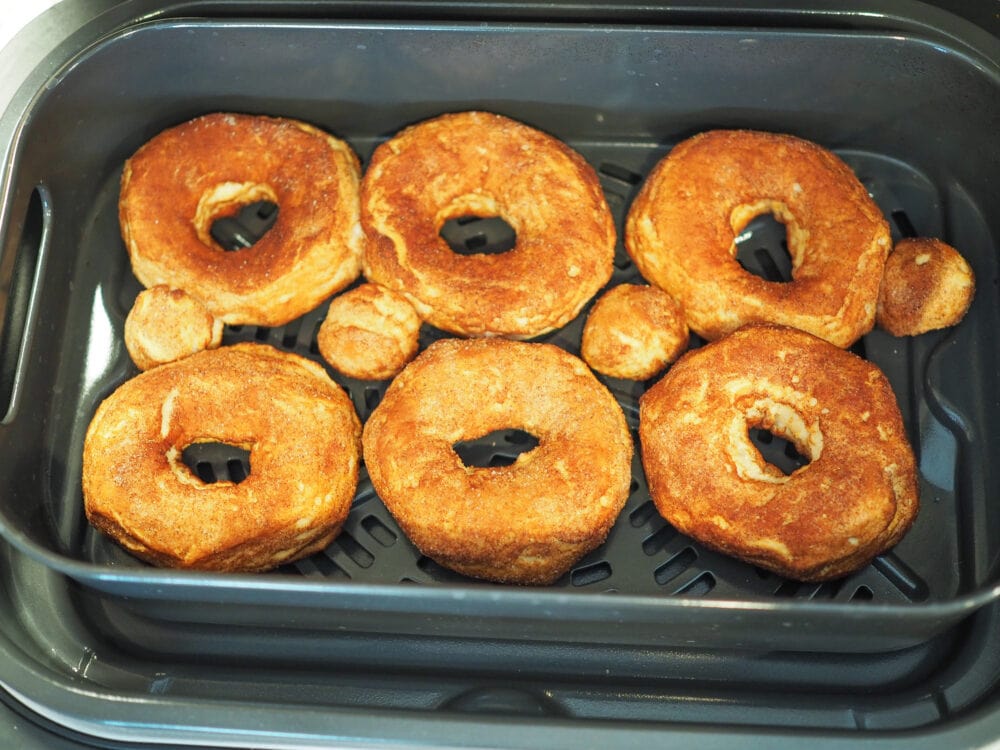 While the donuts are air frying, set up a little assembly line of about a half cup of apple cider syrup in a small bowl, a small bowl of cinnamon sugar, and a plate for serving. 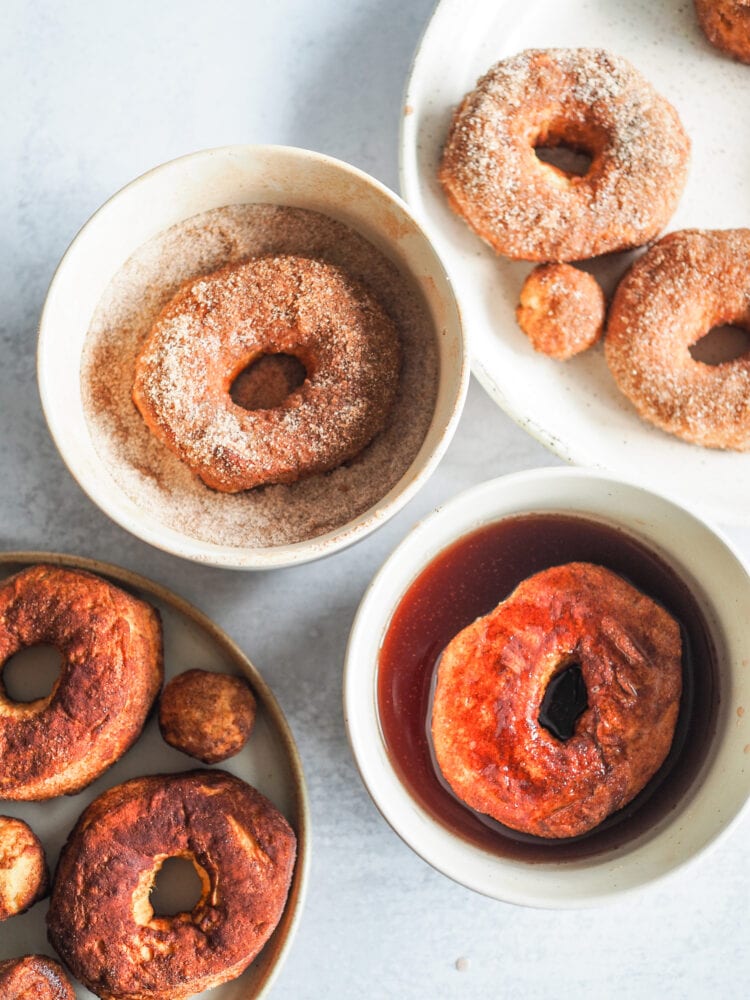 Once the air fryer donuts are done, carefully dip each one in the apple cider syrup. Flip the donut in the syrup and be sure to coat boat sides. 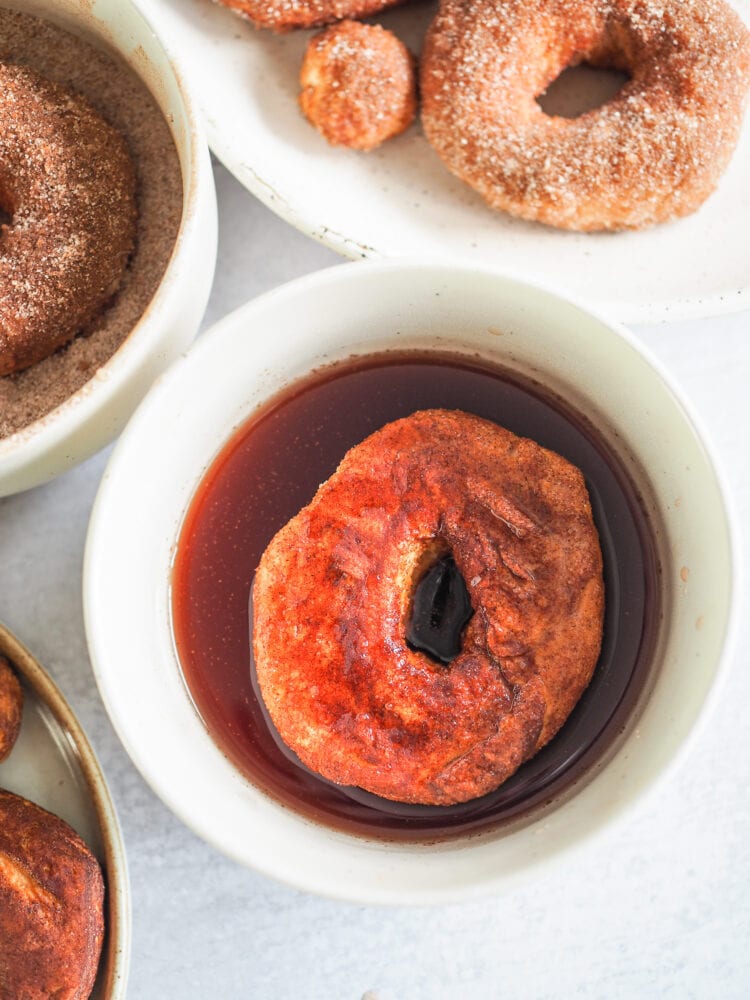 Then dip the donut in the cinnamon sugar mixture, flipping again to coat both sides. Repeat this process until all the air fried donuts are coated in apple cider syrup and cinnamon sugar. 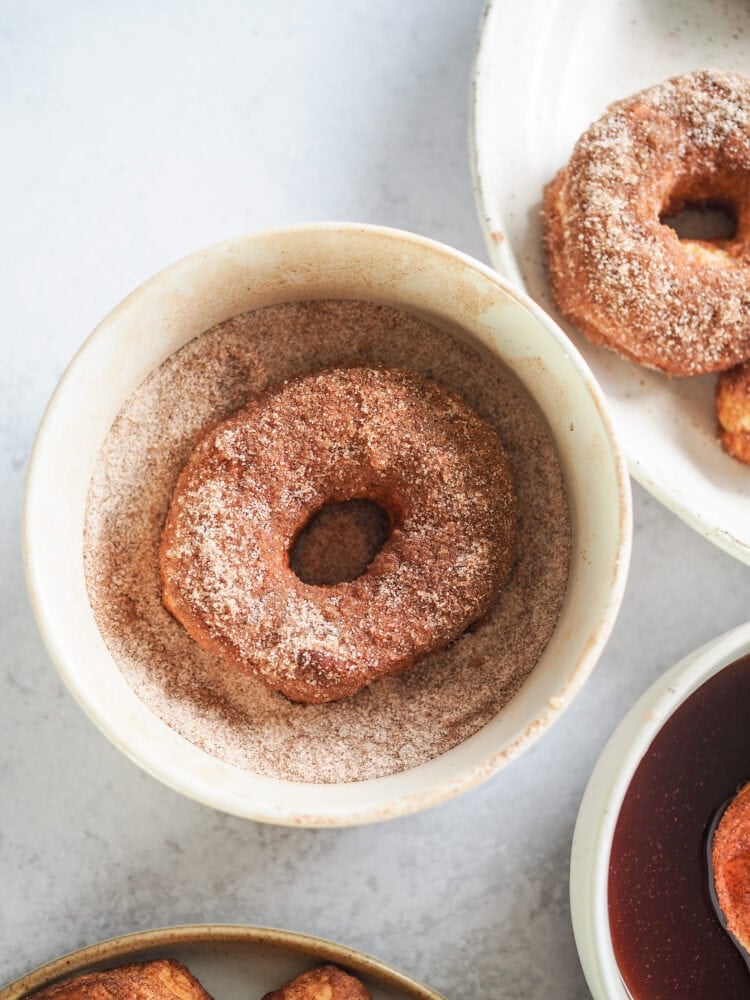 Serve warm with a cup of tea or coffee and enjoy! 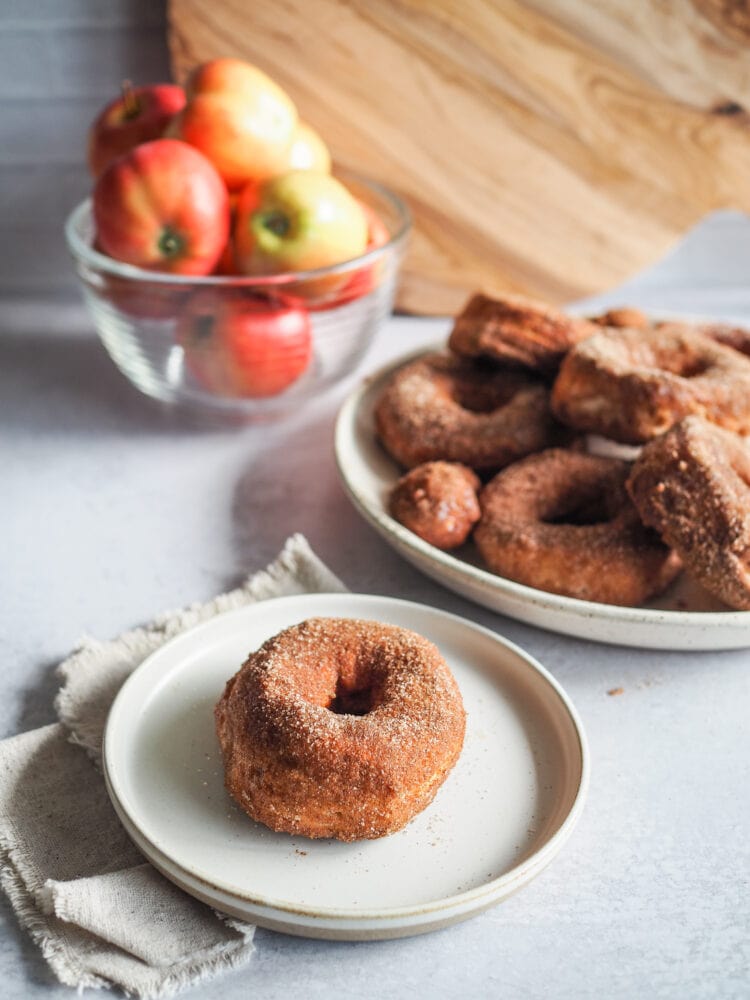 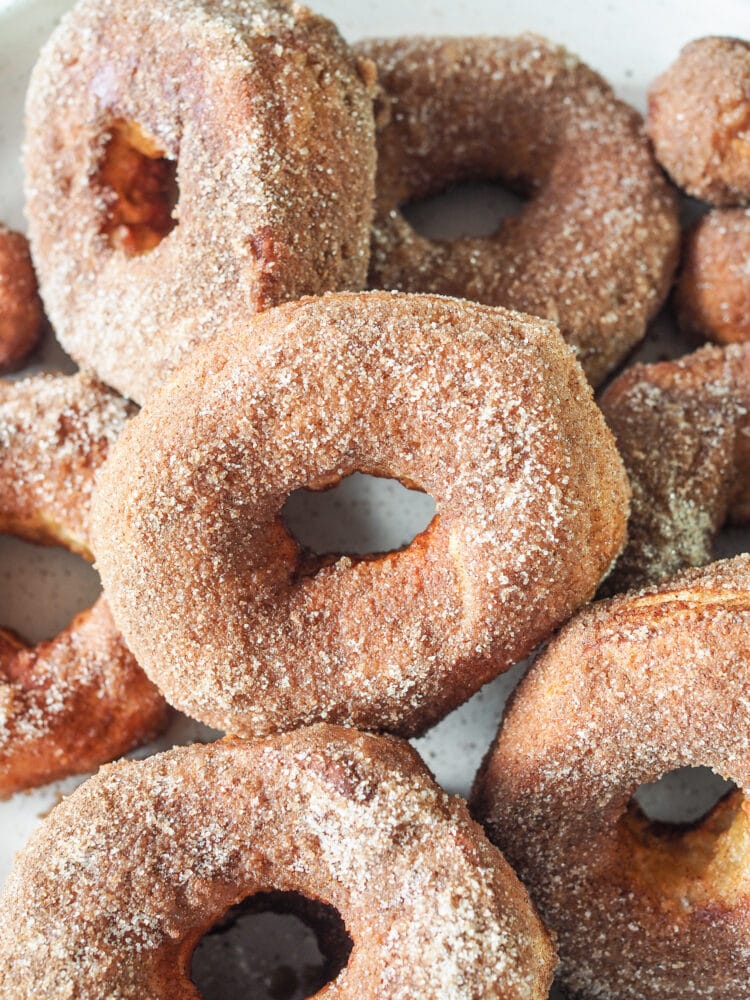 You can also swap the mulling spices syrup for apple cider concentrate.

You also may swap the cinnamon for pumpkin pie spice or apple pie spice.

If you have an extra large air fryer with a deep basket, you may need to add 2-3 minutes more to the cooking time.

These will keep for 3-4 days. But the air fried donuts are best enjoyed warm, so reheat them if necessary.