This Cherry Almond Baked Oatmeal is an easy breakfast recipe back from my innkeeping days. Baked oatmeal is a great way to make enough to feed a crowd. Plus it’s a hearty and healthy start to the day with tart cherries, crunchy almonds, sweet brown sugar, and some grated apple for extra flavor and texture too. 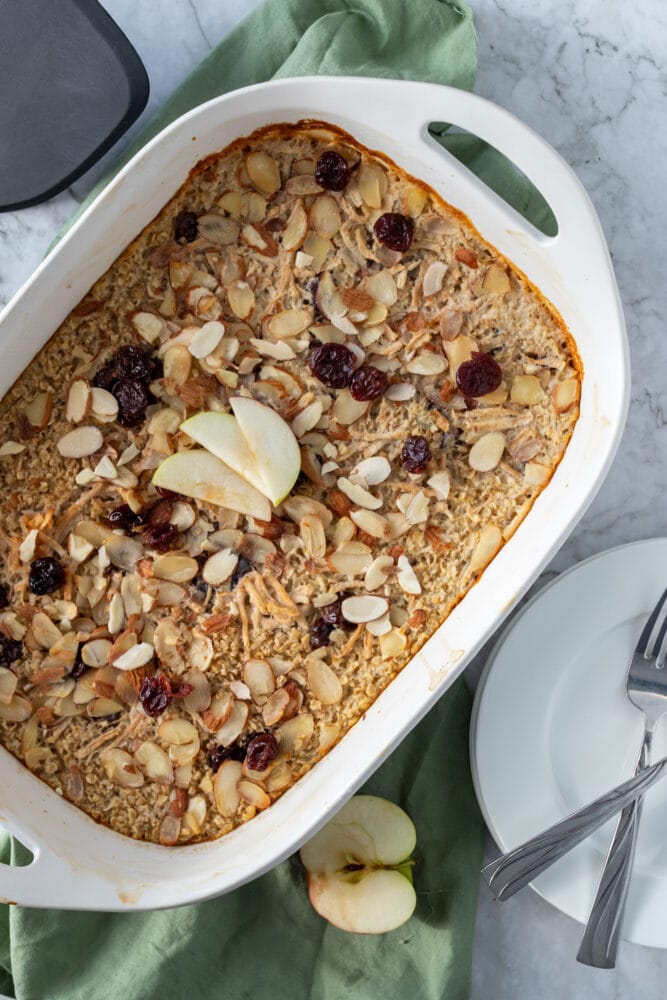 Baked oatmeal is a casserole of comfort. It’s perfect for filling up before skiing or any other outdoor fall and winter activities where you have a houseful of cold and hungry folks to feed. We’ve kept the story below, but feel free to hit the “jump to recipe” button if you’re ready to bake some oatmeal. Slow your scroll just a little, though, for some step-by-step photos. Enjoy! 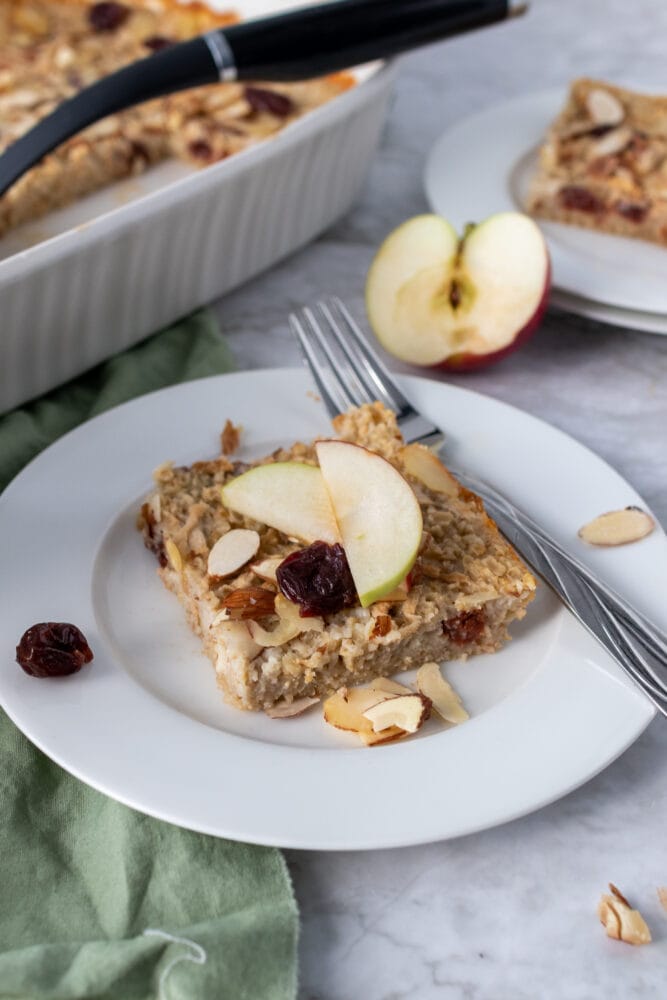 This oatmeal with a twist comes to us via Lois with the Horse & Chase Inn, located in Venice, FL. Normally you wouldn’t associate Venice, FL with skiing or winter activities. But the weekend we were there, Florida was experiencing some chilly 36 degree weather and rain. We bundled up, adorned ourselves with rain gear and still went to the beach to hunt for sharks teeth. Venice is known for being the Shark’s tooth capital of the world and we were not going to let a little weather spoil our fun.

That afternoon, Lois warmed us up with conversation and her southern hospitality and while I didn’t get a chance to try her version of the recipe, she gave me all the instructions to make it at home. Lois calls it “Michigan Oatmeal” because of the cherries. And the cherries are definitely are a nice change from the standard raisins and cinnamon that are usually mixed into oatmeal. They’re bigger and slightly tart. 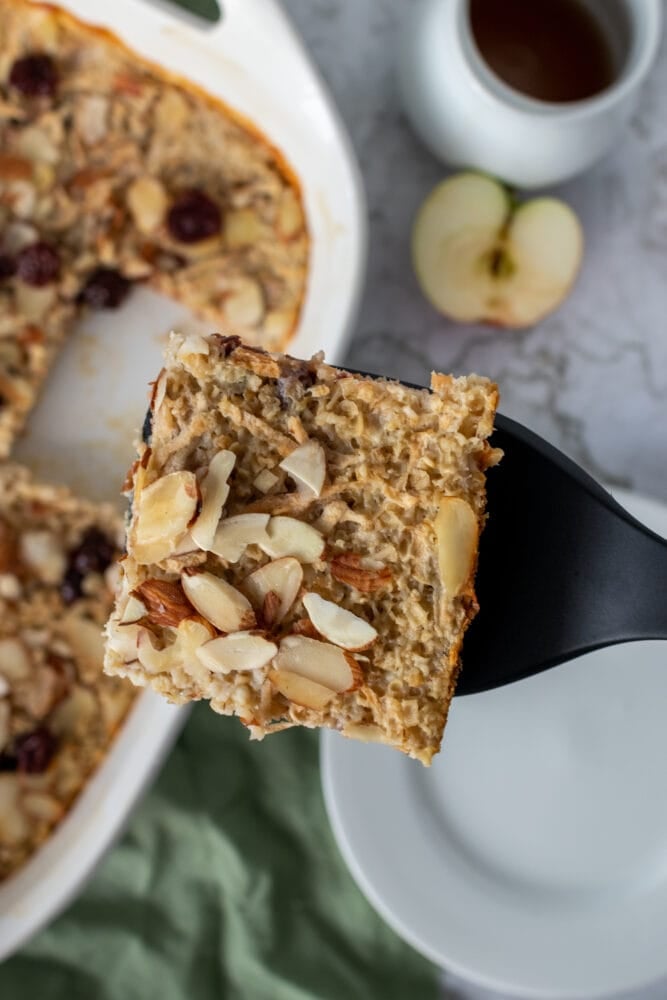 The ingredients for this recipe are simple and the recipe is quick.  Here’s a quick look at what you’ll need … 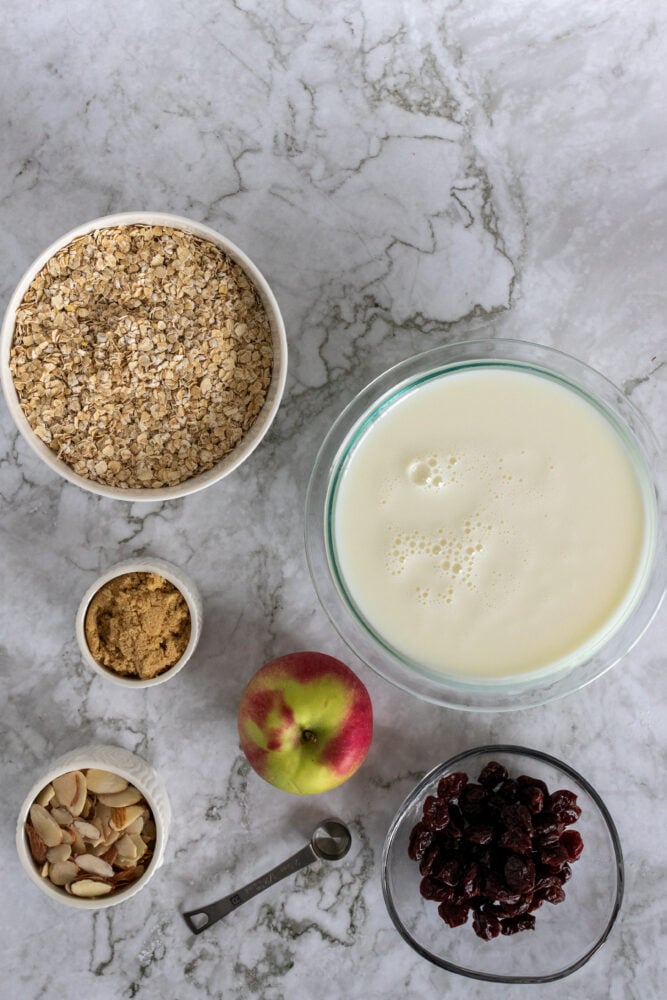 Start by pre-heating your oven to 350 degrees and then wash and grate your apple. You could also substitute the apple with 1 cup of cinnamon apple sauce. However, the grated apple adds great texture. 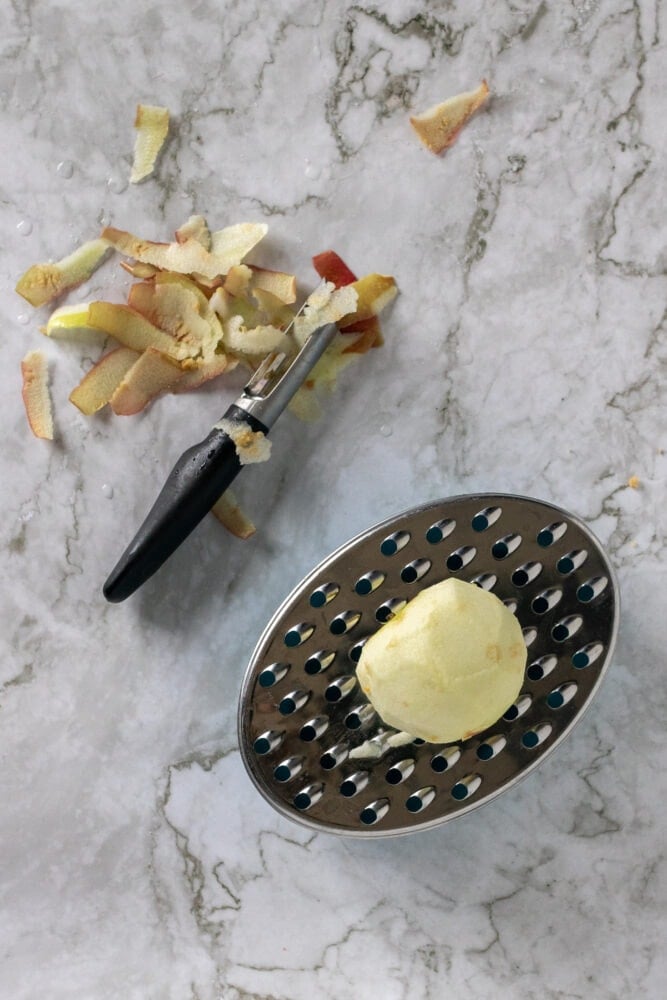 All the steps following are uber easy. Simply layer all the ingredients in a greased glass casserole dish.

First, layer in the he oatmeal. You can use quick oats or regular oats. Regular oats add more texture. 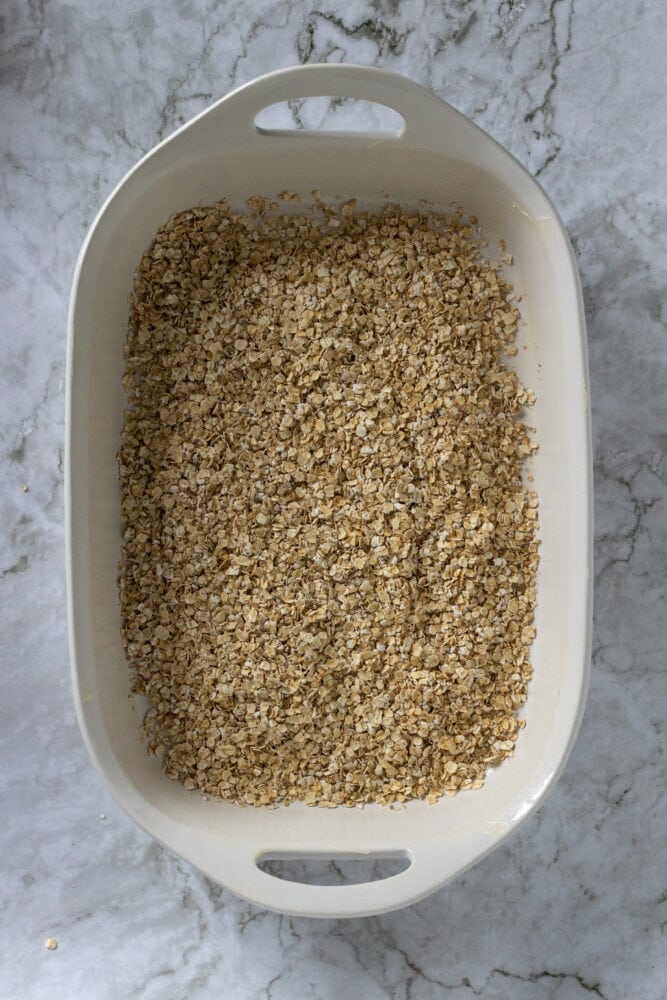 Then stir the almond extract into the milk. This adds a great almond flavor to the baked oatmeal. Plus, stirring it in with the milk makes sure the flavor is evenly mixed within the casserole. 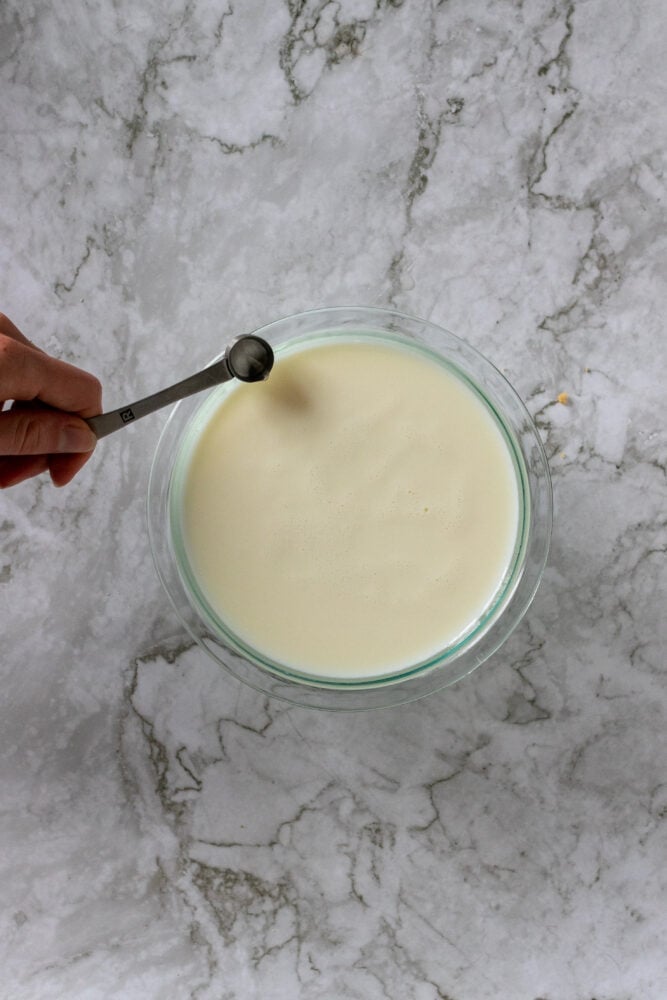 Next, pour the milk over the oatmeal. You could also use a plant based milk instead of regular milk. I prefer to use almond milk with this recipe. (Keeps a whole almond theme going.) 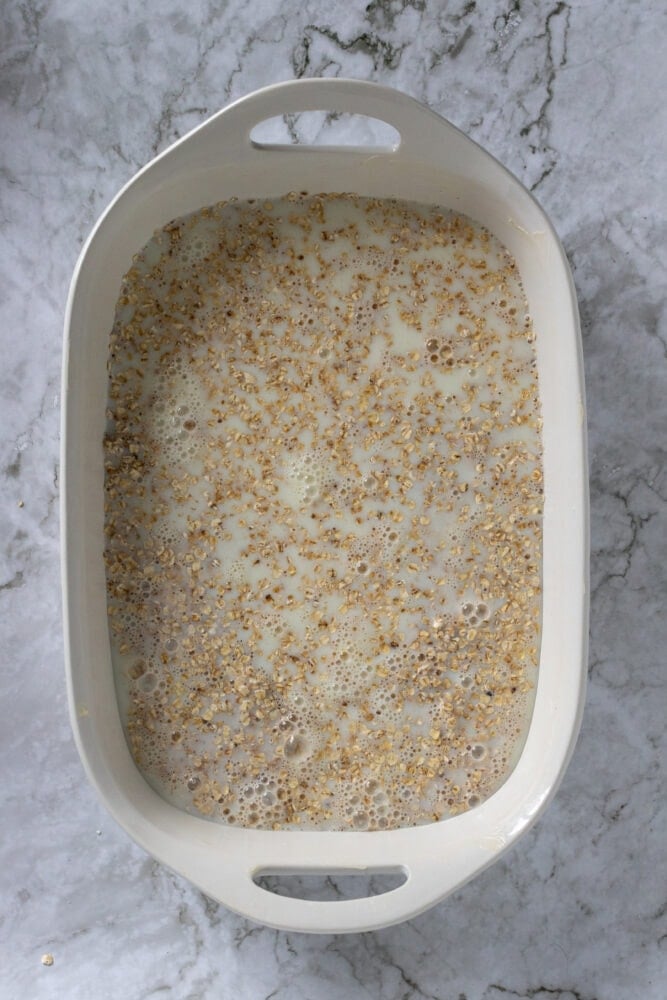 Next, add the grated apple. This adds some texture to the oatmeal bake as well as a bit of sweetness. 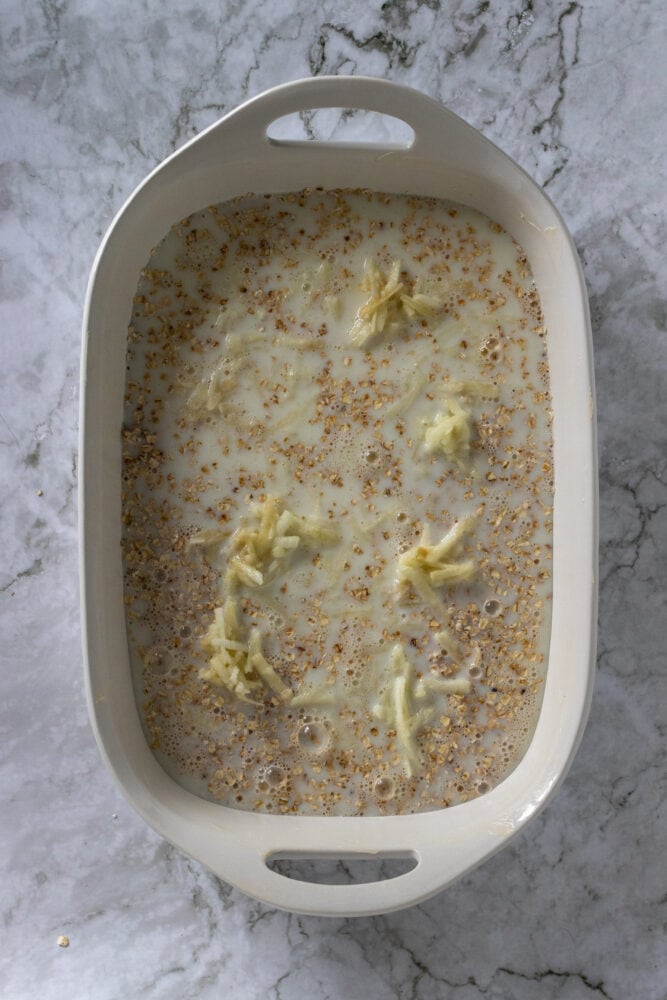 Spoon in the brown sugar, distributing it evenly throughout the casserole dish. But don’t worry about mixing it in. The brown sugar will melt down and add some color and sweetness to the oatmeal. 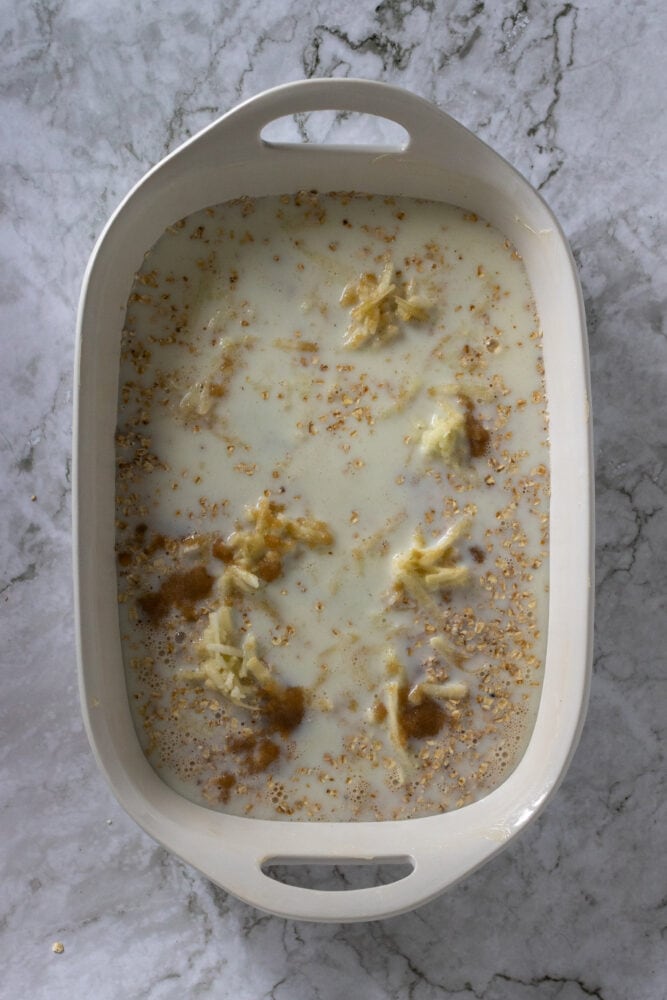 Then, sprinkle on the cherries. I really love the addition of cherries instead of raisins, which are traditionally added to oatmeal. The cherries are bigger and more toothsome. Plus they have a tart flavor that balances out the sweet brown sugar. 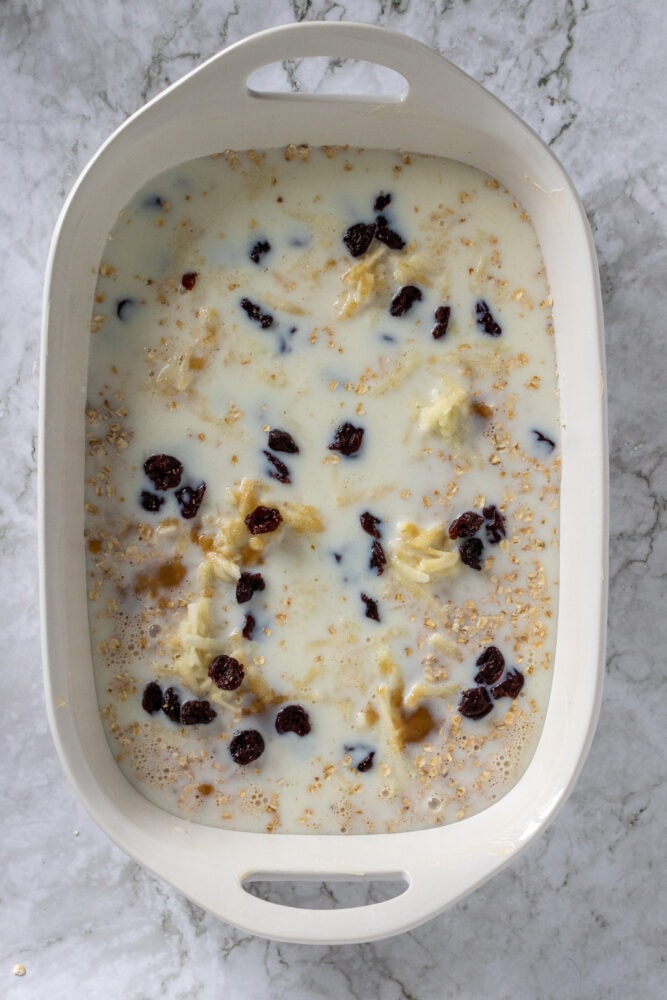 Lastly, add the sliced almonds on top. This gives the breakfast a little bit of protein and a nice crunch to the texture too. You can always add more for garnish after the oatmeal is baked too. 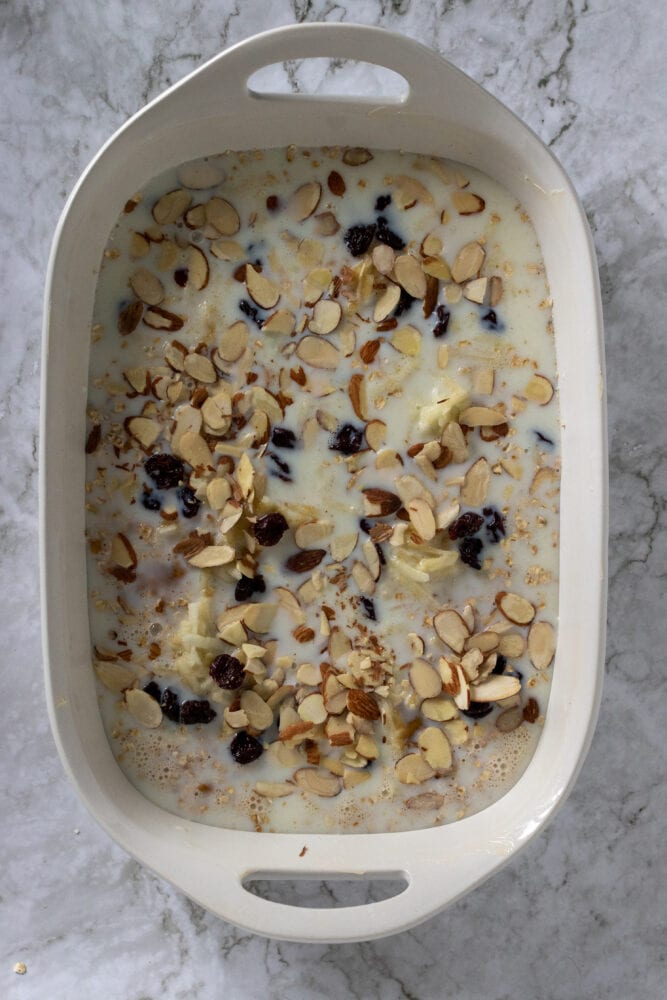 Carefully add the casserole dish to the oven so the milk doesn’t spill. Bake the oatmeal at 350 degrees for 45 minutes. When the oatmeal is done baking, let cool for about 10 minutes. Serve with a side of maple syrup or honey. 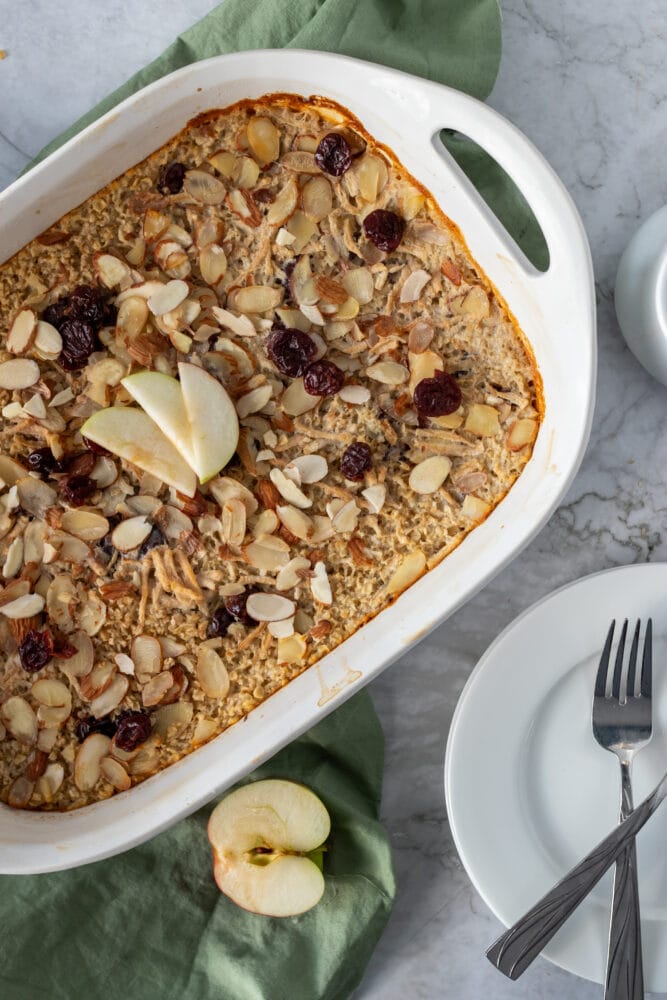 Try Baked Oatmeal For Dessert Too!

If you’re like me, you sometimes like to have “breakfast” during other parts of the day other than just the morning. So it’s good to note that this Cherry Almond Oatmeal Bake also makes a terrific dessert with a scoop of vanilla ice cream. We had some left over that I refrigerated and re-heated the next day for an afternoon treat. Since the oatmeal had overnight to soak up all the almond milk, extract and moisture from the cherries, the consistency more of a bread pudding. Delish! 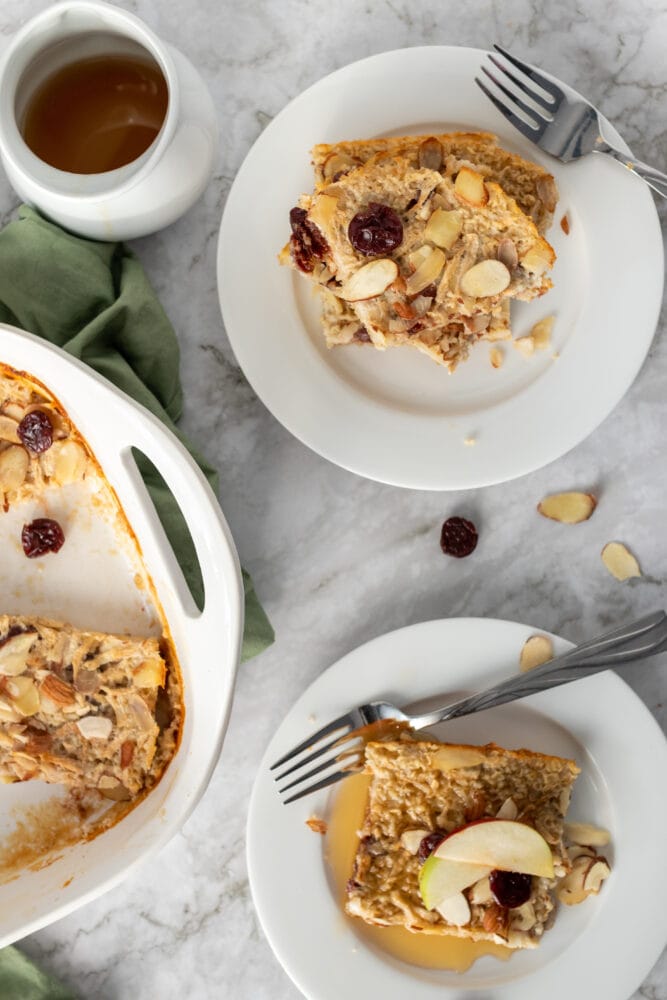 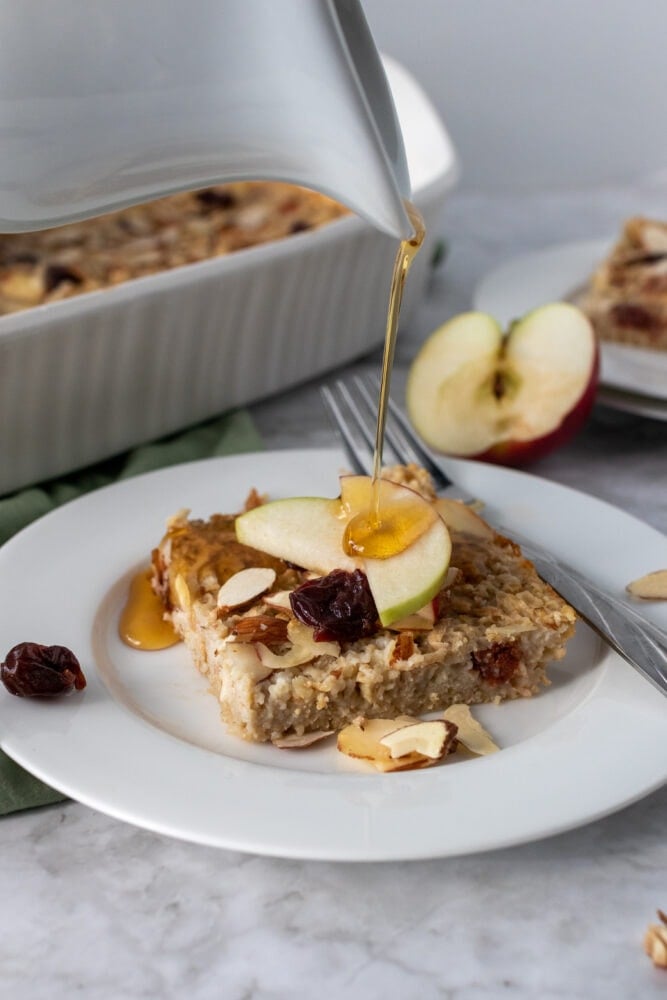