Back in my innkeeping days, we made the BEST homemade cinnamon rolls. From scratch. It’s an easy recipe, it takes a little extra time. But once you make them from scratch, you’ll never want the pre-made stuff at the store again.

This recipe is originally from my innkeeping blog, Inn The Kitchen. You can hit the button above to skip right down to the recipe. Or scroll through the step-by-step photos and get a peek into my former life as an innkeeper. Either way, I’m sure you’ll enjoy these homemade cinnamon rolls.

It never ceases to amaze me how many different things can be baked from just tweaking a combination of them.

For this morning, I’m going to make a traditional chilly-morning-gooey-cozy-comfort-food favorite — cinnamon rolls. I confess, I usually make these by popping open a cylinder can with a certain giggly dough boy gracing the label. The orange icing was my favorite.  Artificial … yes, I know. But quick and easy. 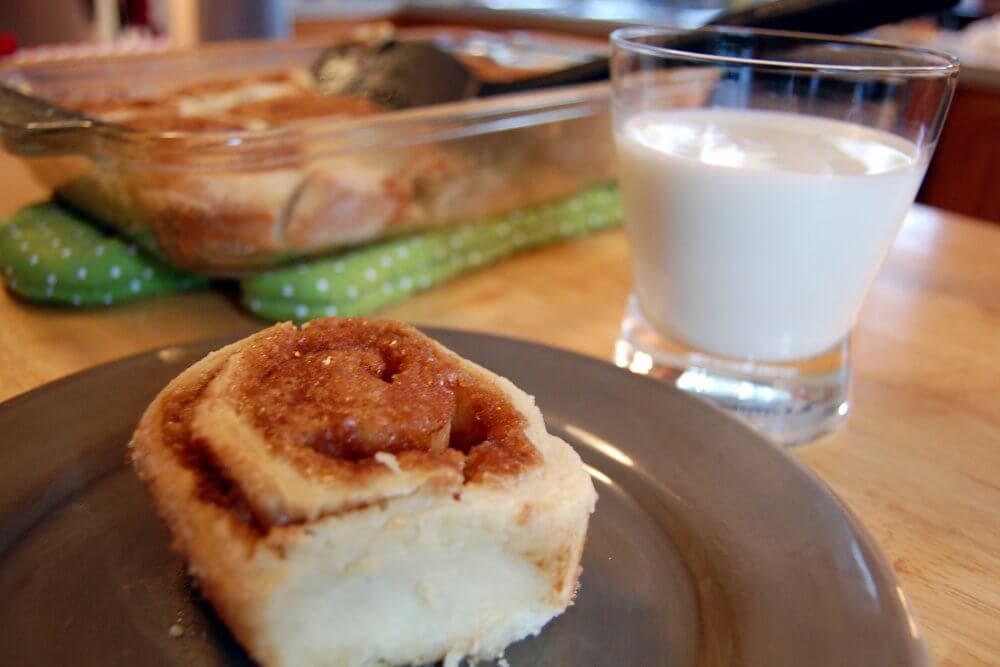 This recipe is not a quick one. But it is easy. And they taste soooo much better with the added ingredients of time and love.

There are a lot of different variations of recipes for cinnamon rolls, but this one in particular comes from our friend Dee over at Anchor Inn on the Lake in Branson.

Here’s a quick checklist of ingredients you’ll need to have on hand to bake cinnamon rolls from scratch. 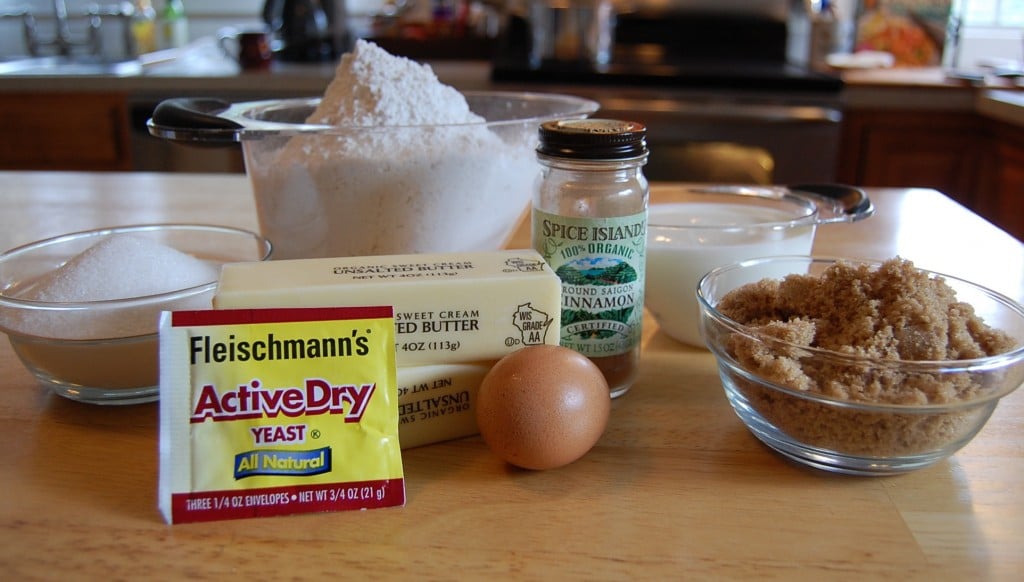 Add the yeast to a mixing bowl with just a little bit of water, about a 1/2 cup.  As the yeast dissolves into the water, you may need to mix it up just a bit to make sure there are no big clumps. 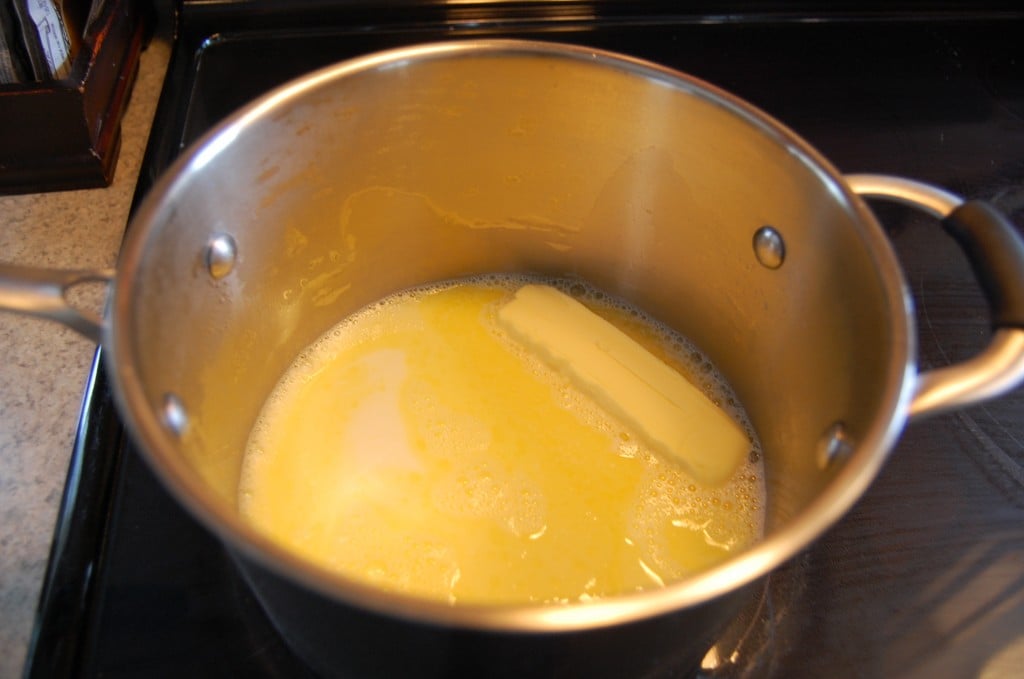 Scald the milk and melt the butter into it. Just don’t boil it. This is on low to medium heat.

Break the egg into a separate bowl and beat with a whisk. This helps with mixing it in, but it’s also so you don’t ruin your whole recipe in case the egg is bad. Luckily, I’ve never encountered a bad egg. 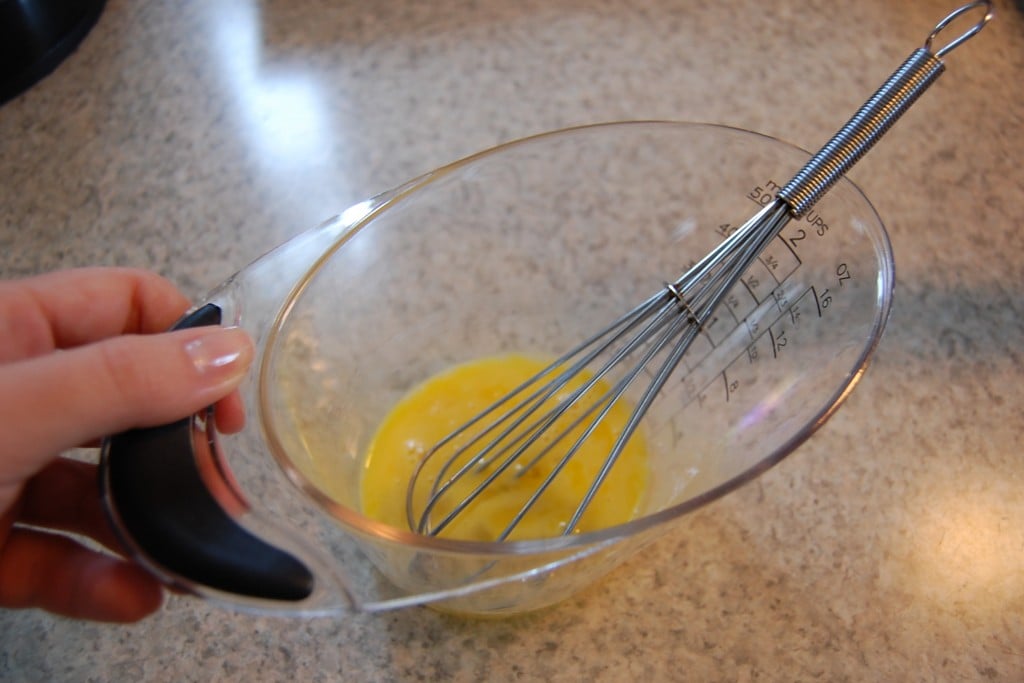 Next, add the flour and white sugar to the wet mixture and lightly mix with a spoon, just so that all the flour/sugar is wet.  Cover with a towel and put it in a warm place (I place it on top of my heating oven) to let the dough rise for an hour. 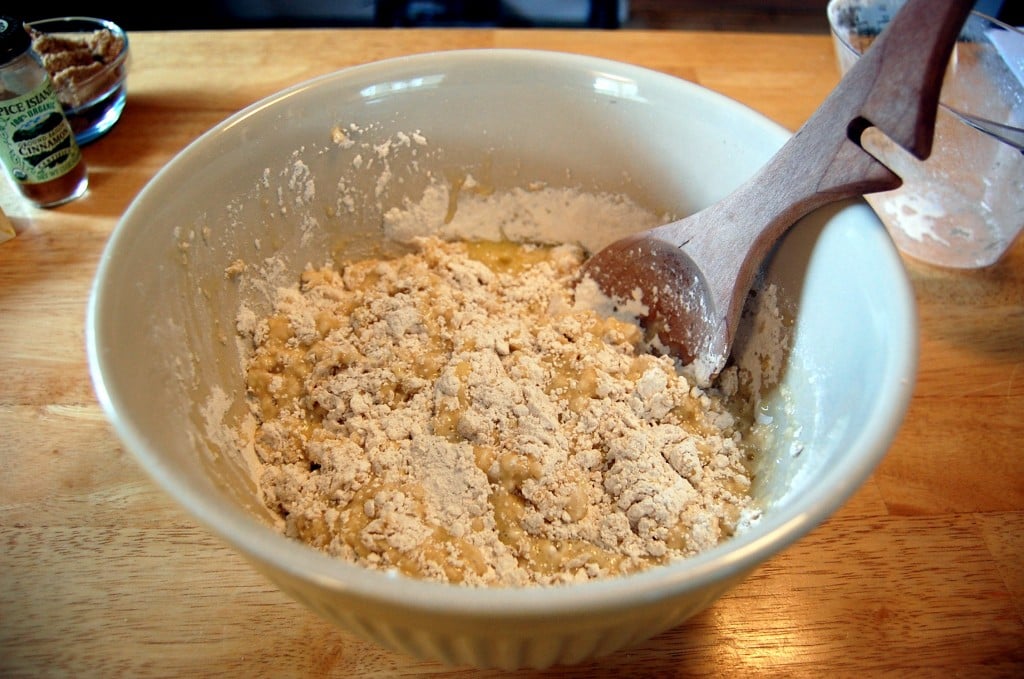 In the recipe, Dee suggests turning the dough out onto a floured surface and kneading for 5 minutes, THEN setting it aside to rise. I followed this instruction making my first batch of cinnamon rolls, and the dough never rose. But I’m pretty sure that had a lot to do with the fact that it was a hot humid sticky sauna outside that day.  Even in my second batch, it did rise, but it didn’t double in size.  As much satisfaction as I would have received from punching down the dough, I didn’t want to fight mother nature. So I just let it rest and rise on it’s own. 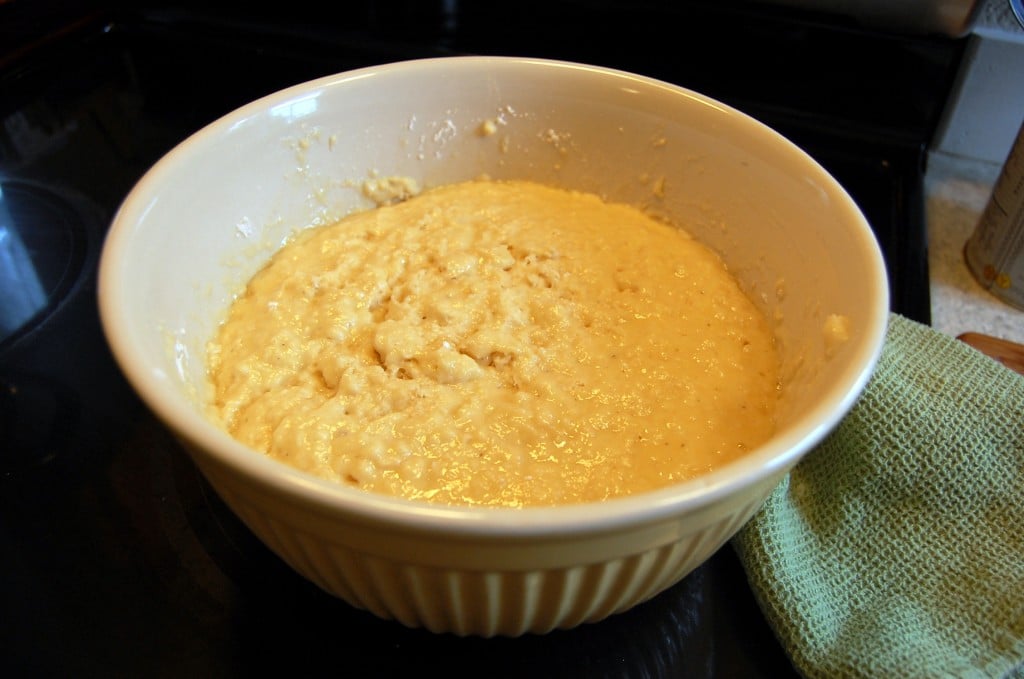 Put the dough out onto a floured surface. Also flour your hands up pretty good, then work dough into a ball and then roll it into a rectangular shape. It doesn’t have to be perfect since you’ll be rolling it up with cinnamon. 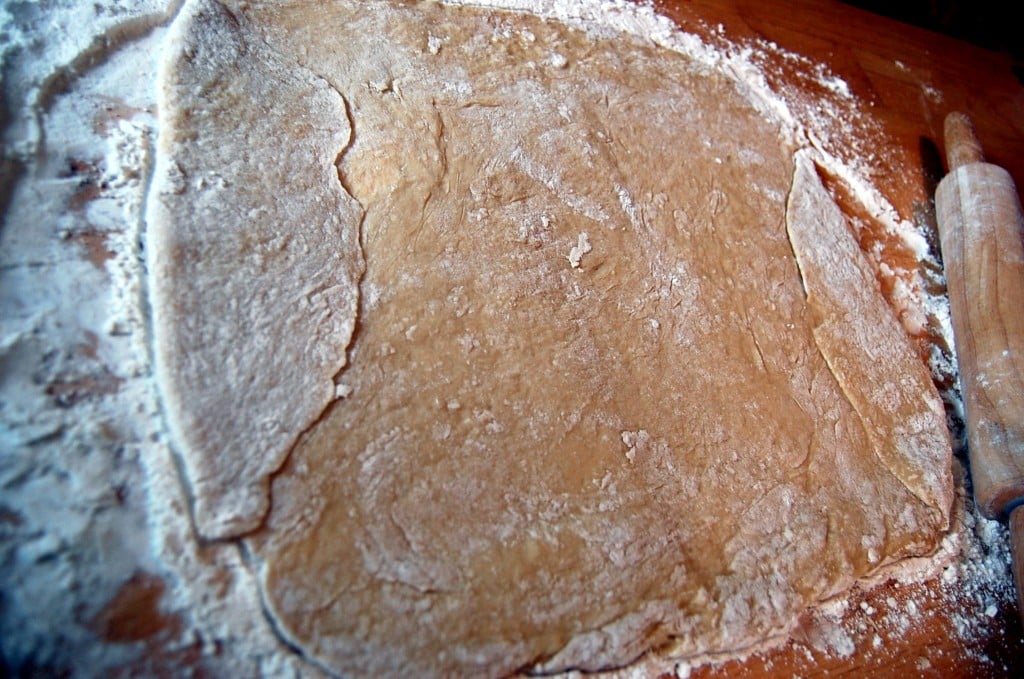 Spread on melted butter (about  3/4 of a stick) and sprinkle with brown sugar and cinnamon. 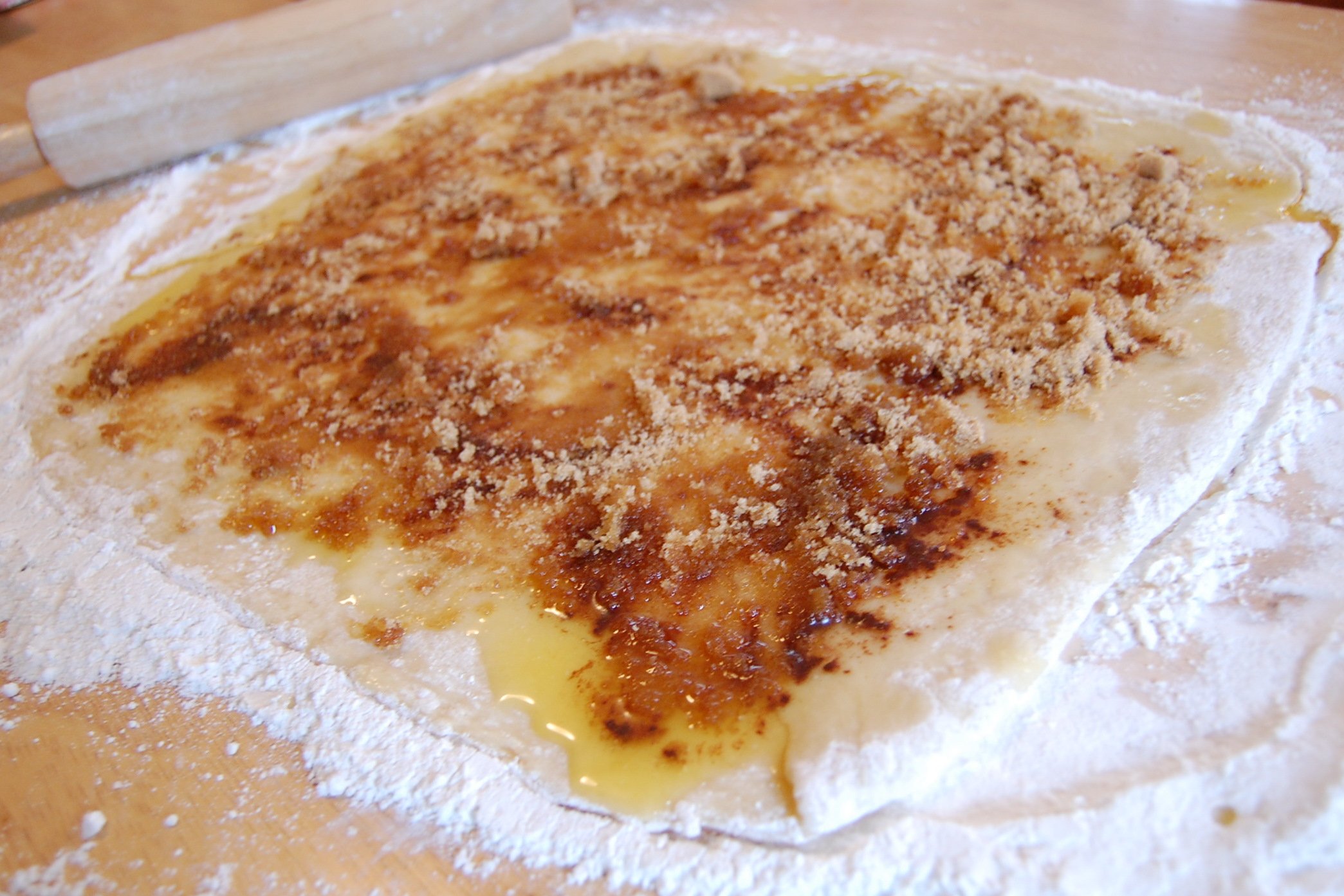 Roll into a tight roll and pinch the edge together at the end. Some cinnamon sugar gooeyness might ooze out.  That’s okay. 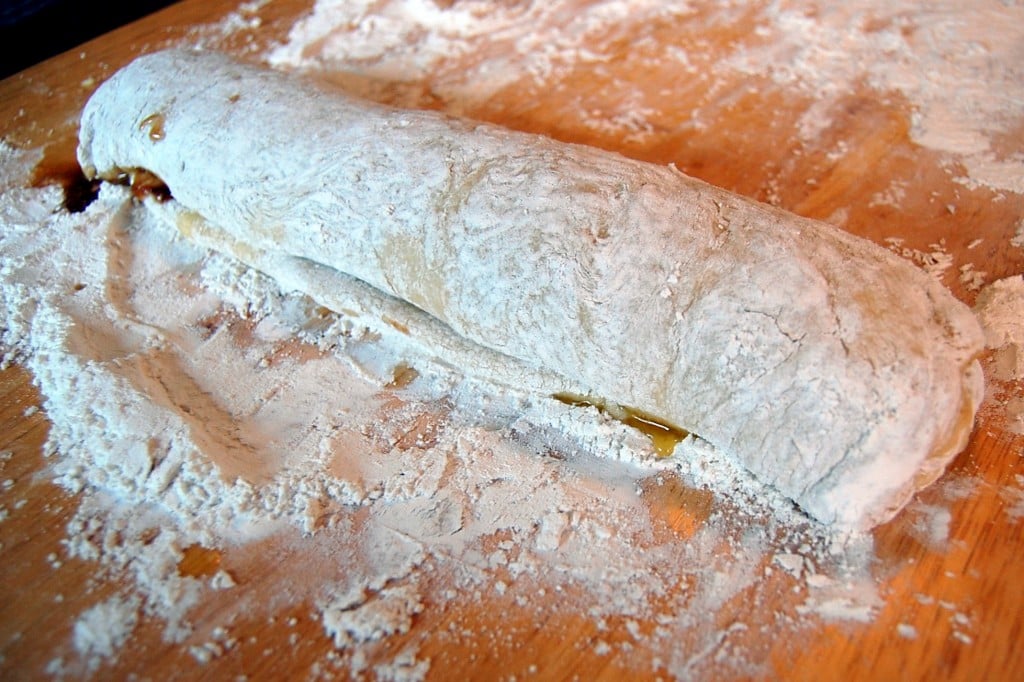 Then slice into 1 inch think rolls and place onto a greased/floured cookie sheet or baking dish. 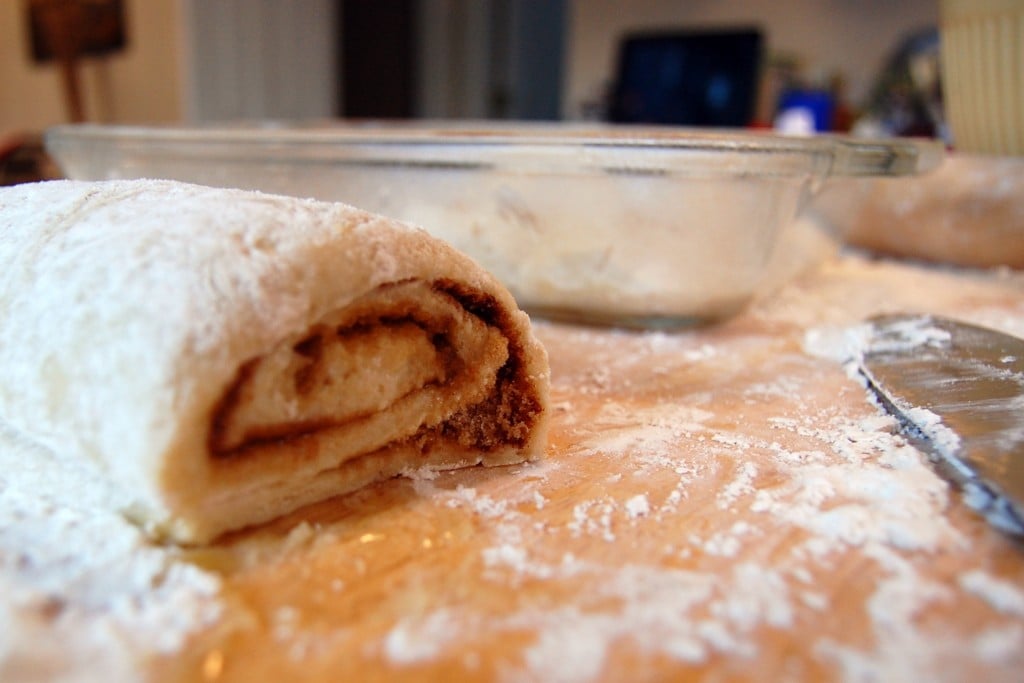 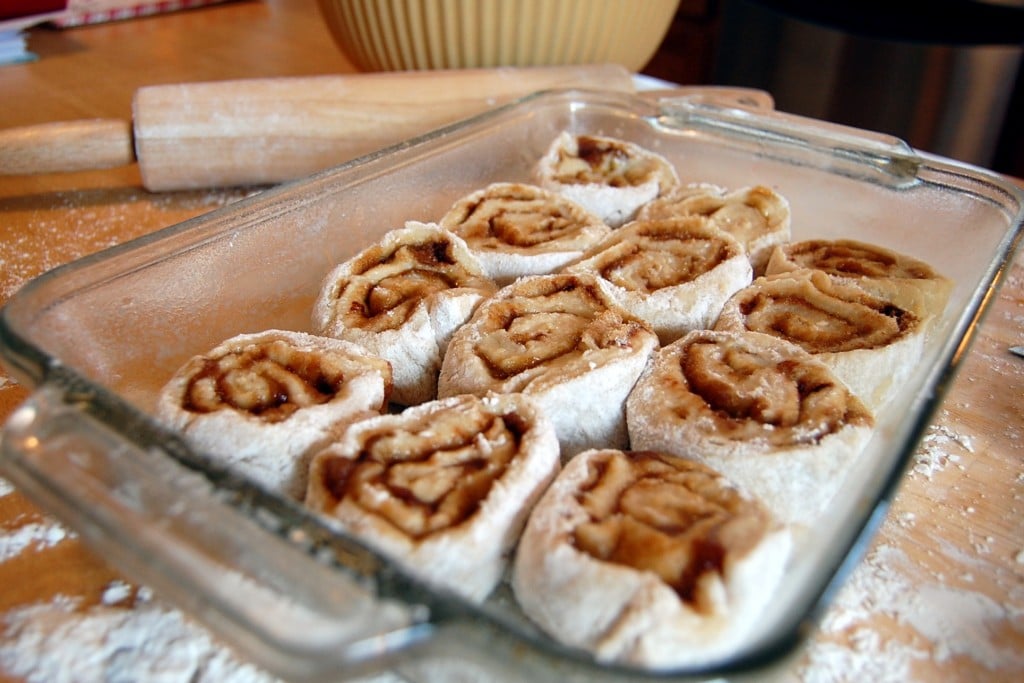 Next batch, I think I’m going to try adding the orange glaze from The Old Hen  Bed & Breakfast. Then I’ll have the full homemade version of my dough boy childhood favorite. 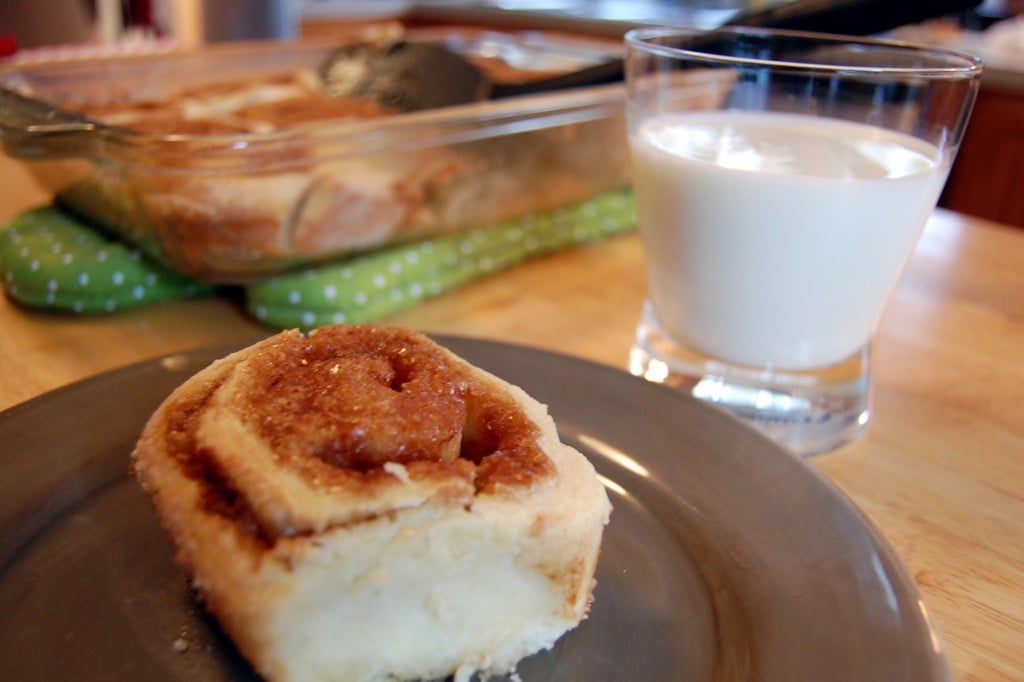